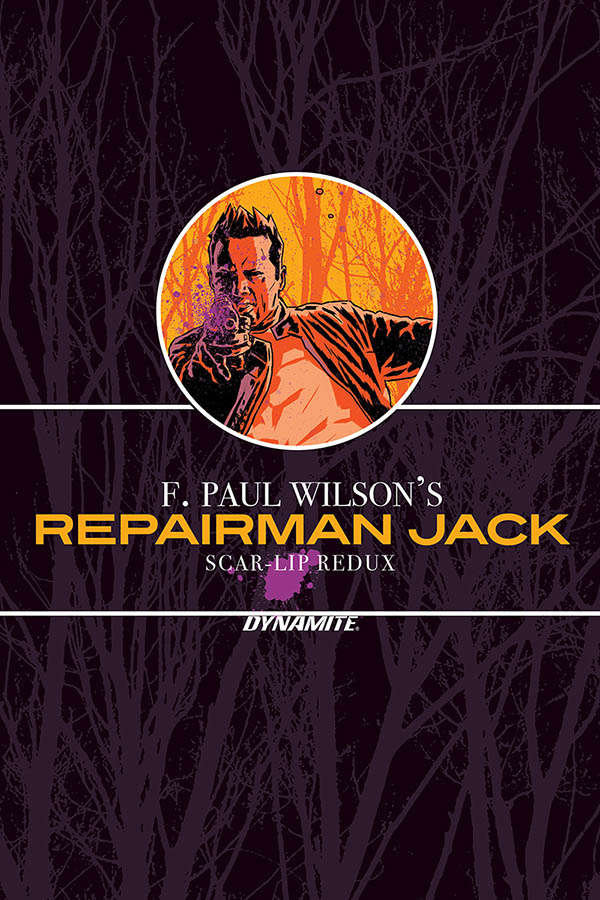 Got a problem? He can fix it. He thought he’d seen the last of the Rakoshi, but one has survived. A particularly cunning and deadly Rakosh known to Jack as Scar-Lip. Now, Jack faces the fights of his life as he seeks to end the creature once and for all, before it ends him!

Wilson said, “Love comics. My earliest reading materials were Vault of Horror and Uncle Scrooge. I became a Ditko fan with This Magazine is Haunted. The visual medium is great for a sock in the gut in the final panel. I’ve always found the comics world easier to deal with than Hollywood.”

First appearing in 1984’s The Tomb, Wilson’s Repairman Jack has today featured in more than 20 novels. Working as a fixer, Jack works independently to solve problems for people in his near-future world. Ranging from issues familiar to us today to supernatural creatures and scenarios. Wilson’s library of books has sold over 8 million copies to date.

F. Paul Wilson and his famous hero are a natural fit at Dynamite, through interesting connections. Some of Wilson’s earliest writing in the 1970s was a couple comic shorts published by Warren in Vampirella’s sister titles. He also enjoys explaining the uniqueness and appeal of Repairman Jack by comparing to two other iconic franchises published by Dynamite.

“Jack is a blue-collar hero. That’s a big part of his appeal. Readers can imagine hanging at Julio’s and hoisting a few beers with him. Can you imagine that with James Bond or John Wick? Hell no”

The hardcover graphic novel will also be available as a limited edition signed by Wilson.

REPAIRMAN JACK: SCAR-LIP REDUX will be solicited in Diamond Comic Distributors’ January 2019 Previews catalog, the premier source of merchandise for the comic book specialty market, and slated for release in March 2020. Comic book fans are encouraged to preorder copies of the issue with their local comic book retailers. It will also be available for individual customer purchase through digital platforms courtesy of Comixology, Kindle, iBooks, Google Play, Dynamite Digital, ComicsPlus, and more!