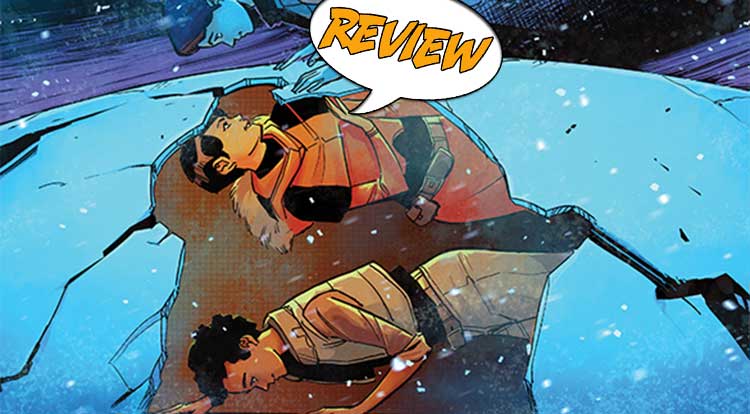 It’s been a long and harrowing journey, but Sam and Alea made contact with the creature that lives beneath them. What will they learn about it…and themselves? Find out in Outpost Zero #14 from Image Comics! Previously in Outpost Zero: Sam and Alea came face to face with the giant squid-like alien that lives under the Outpost. Alea’s first reaction is that it must want to eat them. Otto, the robot, challenges her on this. She puts her hand against the glass and finds the creature vibrating with a pattern. It is communicating – it wants Sam and Alea to enter the water and talk with it. Back up top, the Council decide to publicly punish Alea’s parents, Jann and Denis, for the distress they’ve caused the others, and they destroy the probe. Karen and Jann go to the breach, suit up and go in search of Sam and Alea. And we learn that Mitchell, once during a fight, had a vision of a tentacled creature taking Steven away.

Outpost Zero #14 is the last issue in the series and it is a corker! It’s been a slow burn along the way, but Sam and Alea are finally deep beneath the Outpost where they brave the frigid waters, trusting to the alien to keep them alive. And their experiences with it are astonishing.

Sam sees and talks to his parents. And Alea talks with Steven, who explains things. They’re sharing a mental connection through the alien, like a mental simulation where they can see, hear, and even feel each other. Steven is alive, and he has answers for Alea.

Sam gets back first, and he and Otto go to an unoccupied part of the ship where there is a records console. The alien directed him here. Finally, he can find out the answer to something that has been plaguing him since issue #1 – the holographic recording he’s had. It always breaks off before the end, in the middle of a thought. He gets to hear it in its entirety – and it is not what he expected. It drives him to find the last recording made from the ship, which changes his life entirely.

Steven tells Alea that where they are is akin to a dreamscape, a virtual reality built from the memories of people the alien has contacted. It can only reach the humans when they are in a certain emotional distress, such as being terrified or being near death. Steven had a panic attack the night he disappeared, and through the alien, he knew Sam was in the airlock. The alien spoke to Sam through him, and the alien took him when he went onto the surface. It’s tried to do this before, making the storm cell, and the first time it went terribly wrong. Finally, with Steven, it was able to keep him alive.

This is when Jann and Karen arrive in search of their kids. Their gut reaction is to pull Alea out of the frigid water. Sam tries to reassure them, but Alea waves. Otto greets them by name and admits that the alien called them down so they too could see it and learn the truth.

Life rarely wraps up all its loose ends tidily, but by the end of this issue, the major mysteries that have been there all along are finally explained. Life goes on. The young people have grown into adulthood, and Sam and Alea have grown even more. They understand better how they fit into their community. Lyss and Mitchell also have had some growth, but to a lesser extent. I kind of wish there had been a little more to their stories, but they had enough to matter and to fit into this story. This is a lovely, lovely book. It was a wait for this issue, but well worth it.

IMAGINATIVE TO THE END

The art of Outpost Zero #14 continues to be really great. I love the scenes in the dreamscape. The people look like themselves; the world is what’s interesting. It’s a combination of the real world of Outpost Zero, as filtered through people’s memories, but combined with the reality of the icy planet they’re on, so everything in it has a pale bluish tone. It has all the details but doesn’t quite feel real; it is a virtual reality.

There are some hard truths about the past, about how they got here and why things are the way they are. It makes for some emotional scenes, and those are deftly handled. This issue runs the whole gamut from joy to horror and it is all presented clearly.

BOTTOM LINE: I HATE TO SEE IT END

We’ve gotten to know the characters in Outpost Zero #14 so well – we’ve seen their hopes and fears; we’ve seen the good and the bad. Their life is still potentially precarious, but we leave them with a sense of increased wonder and optimism.

There are always discoveries to be made for those willing to dare the unknown.