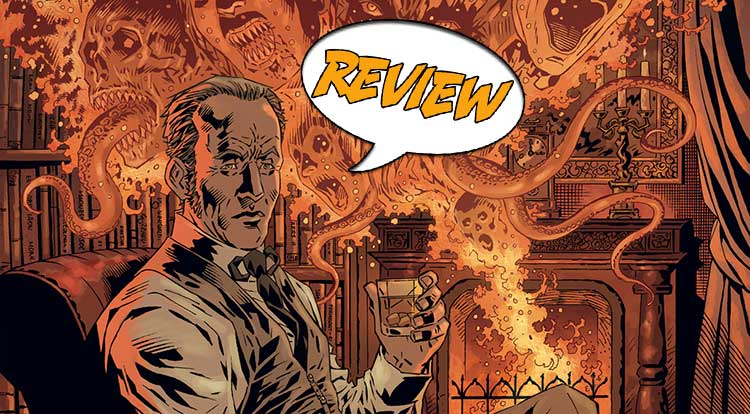 It is 1848, and the 1st Duke of Wellington has decided to tell his story – his whole story. What mysterious and secret evils has he laid to rest? Find out in Wellington #1 from IDW Publishing! Previously in Wellington: It’s 1848, and Sir Arthur Wellesley, 1st Duke of Wellington, has an illustrious career behind him. He has an impressive record as a general, and defeated Napoleon at Waterloo. He has served as Prime Minister. He is Commander-in-Chief of the British Army. But what if that isn’t all there is to his story? What if he were also a monster hunter?

THE TIME HAS COME FOR HIS STORY TO BE TOLD

A man arrives at Apsley House in London as Wellington #1 opens. He knocks on the door and finds it open, but no one is there to greet him. He walks in; he knows the way and he wishes to be punctual. This man is Drew, a journalist. Wellington asked him to come so he could tell his story. It’s a great framing device, reminiscent of Dr. Watson to Holmes.

Twenty years ago, Wellesley received a note from a friend, Olivia Sparrow, who asks him and his wife, Kitty, to come to Yorkshire to visit and investigate three mysteries. A child has gone missing and people have seen a black dog with glowing red eyes. As for the third mystery, a man was murdered and Olivia shows him the body. It has strange bite and claw marks on it, but his limbs are also covered in some kind of writing. More unusually, his body has not decayed. He was found near a lead mine.

Naturally, Wellesley rides off to investigate. He finds tracks that lead to one of the mines, and just outside the door to it, meets a raven that says “Ja!” and “Nein!” Moreover, it does so in response to Wellesley’s talking to it. Are its responses merely random speech from an animal? The bird seems to make uncanny sense before it flies away. Undeterred, Wellesley goes into the mine and finds out that it is completely dark and he neglected to bring a lantern. He still stumbles upon a book which, he can see when he gets back outside, is written in the same writing that covered the body.

The day was overcast to begin with, but as he leaves the mines, the wind picks up and the clouds get darker. He rides away, and a large black dog with red eyes chases him. It is not fazed by a gunshot and doesn’t slink off until Wellesley strikes it with his sword. By the time he gets to the stables, the rain arrives, the dog vanishes, and Wellesley sees the shape of a woman disappearing into the woods. But his day isn’t over yet. Back at the house, Olivia tells him he has a visitor.

I love a good historical mystery, thriller, or horror story. Wellington #1 feels rather Holmesian; maybe it’s just reminiscent of the Hound of the Baskervilles, but I think it’s also the intelligent, contained investigator. I like the way this is shaping up, and I really like the tone.

The art of Wellington #1 is moody and evocative of the time and place. The 1800’s were fairly dark, especially at night. When Drew walks through Apsley House, it is darkly shadowed, fully furnished, but empty of people. In this light, Wellesley’s hunting trophies look fierce and a little creepy. Then, if we look carefully, the paintings on the wall upstairs look more frightening. Instead of portraits, they’re pictures of odd creatures, even monsters. At first you think it may be a trick of the shadows; belatedly you realize that there is more to Wellington than first meets the eye.

The house in Yorkshire is lit by firelight, so the interior of the house looks warm and close. The outbuildings are stone and darker. I like the changing colors of the sky as the storm brews up. It gives the light an eerie character that looks just a bit supernatural. The character design is quite good, as are the animals.

I was not sure what to expect in Wellington #1, but I really enjoyed it. I liked the set-up, and I like that the investigation starts out very practically, although things steadily get more occult.

Who knew that one of the most famous military men of 19th century England was also a monster hunter?