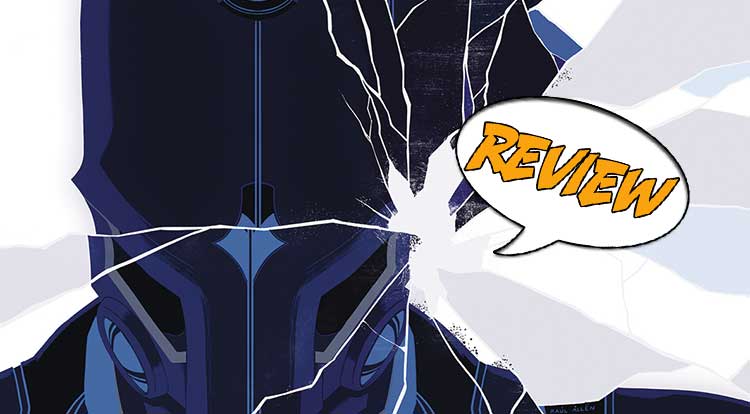 As a contingent of Japanese scientists move through New York working on their secret project, they are hounded by a strange figure who is committing high profile attacks aimed at them. Can U.N. Security Agent Talia Dauber keep them safe or will their secret project meet with failure? Find out in THE VISITOR #1 from Valiant Entertainment. Previously in THE VISITOR: A group of Japanese scientist are working on a secret project that will insure the safety of the Japanese nation. Due to technological shortfalls in their won country, they have travelled to the United States to confer with scientist at Cornell University, but a mysterious figure has taken steps to stop their work. At the same time, U.N. Security Agent Talia Dauber is faced with the general security problems of the U.N. being in session in New York, but soon has more on her plate that she realizes.

SECRETS, SECRETS, WHO’S GOT A SECRET!

The United Nations is in session, and as is customary, the city of New York becomes a congested mess as dignitaries and citizens share the overloaded roads in an effort to continue their daily routines. Unbelievably, it gets worse. Even as a helicopter news reporter complains about the state of the city, an explosion rocks the Japanese consulate, raining down fiery debris on the citizens below. Casualties mount as the news covers the story in progress, and the gridlocked roads make it nearly impossible for emergency services to come to the aid of the people. As a police spokesman takes time to answer questions from a reporter, it becomes apparent that the situation is being taken seriously.

U.N. Security agent Talia Duber was in the area accessing the situation, and spotted a fiery chunk of debris falling from the burling building. Acting quickly, she leaps out and tackles the blonde reporter, who despite being knocked to the ground had the sense of presence to ask for a statement and do a little flirting. “No Comment,” is all the answer she receives.

Meanwhile, in the headquarters of the United Nations, an elderly Japanese man is finishing a video call with his young granddaughter. He is there as part of a team of Japanese scientist who are working on a project which will protect Japan from all the dangers of the world. For the project to move ahead, they group moved to the United States to consult with scientist at Cornell University. If it had not been for the inadequate computers at their own embassy, they would have been at the consulate during the attack, and most likely killed. Surveillance footage shows one man propagated the attack.  When the surveillance feed ends, the explosions began. Now, as the Japanese scientist discuss their next move, the mysterious attacker is show walking down a subway track. Electricity crackling around his feet to no effect, and he leans over a mysterious looking pile of bags in the shadows.

The Japanese scientist arrive at Roosevelt Island, home of Cornell, and begin to set up their research. No one is comfortable with the situation, not the Takeshi Kitanio stand-in, nor the obvious-and-clueless corporate stooge. The young, optimistic and handsome-but-he-doesn’t-know-it scientist stands behind the elder sensei-mentor scientist in his belief that all will be well. Besides, what could happen? Just a group of scientist researching massive operating systems, nothing to see here. Oh look, Agent Dauber has been assigned to protect them! Surely that is not a sign of things to come. What was that? Subway flooded? Exits to the island blocked? Surely a coincidence.

SOME DAYS IT DOESN’T PAY TO GET OUT OF BED.

There are hundreds, probably thousands of writers out there known for their work in the comic book field. However, Paul Levitz (Legion of Super-Heroes, Adventure Comics) is one of those names which stands head and shoulders above the rest. From his legendary Legion of Super-Heroes runs to his prodigious editor skills and contribution of The Levitz Diagram to the comic writers of the world, he is a writer who you feel will give you the best damn story for your money, and leave you begging for more. That said, this issue was underwhelming, not a good thing for a first issue. Something about it stopped me from enjoying it as much as I was hoping to. The most pressing and major issue, in my opinion,  is the characters and characterizations. We spend a whole twenty pages with these characters and I could care less about any one of them. There could be a major snuff film in the next issue, killing all of the characters we have been introduced to and introducing a completely new cast and it would not affect me in the least. Many of the characters seem stereotypical and cookie-cutter. We are never given a hint of what the plot is really about, other than it involves a secret project and a person trying to stop it and protection for one country but possible harm for all the others and a tough security agent who is supposed to protect them.  I’m sure the reaction was supposed to be “WHO IS THE VISITOR!?” but it is much more “WHO CARES!”

On the art front we have MJ Kim (Faith: Dreamside, Ninjak). Kim has slowly been becoming a mainstay at Valiant, and deservedly so. There is so much detail in their backgrounds that you just want to take a few moments and study them. There is a good sense of action and pacing, and the panel layouts work well. For those of you who like it, there is a hint of a manga-style inspiration to the figure work, and it all works well on the whole. Looking forward to seeing more from Kim.

There are multiple issue with THE VISITOR #1, but there is still time in the next issue to fix them. There is a very cinematic pacing to the story, but it ultimately falls flat. Little course corrections may help future issues, such as what the project actually is and telling the reader if this is set in the Valiant Universe. On the whole, the great art did not save the lackluster story, and there was a lot of spinning of wheels to be had.

THE VISITOR #1 is a book that should soar, but instead just sputters along. Pick it up if you like, but be aware this is setting up something that may or may not pay off in future issues.

Too much secrecy in the plot and forgettable characters are granted a reprieve by great art and colors.