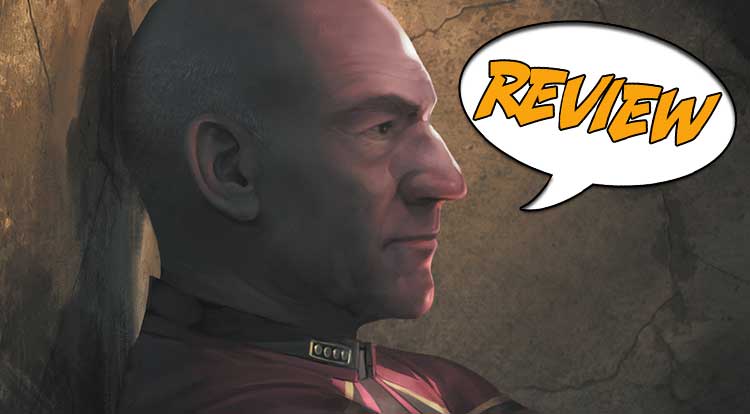 Imprisoned on the Romulan colony world of Yuyat Beta, Picard must find a way to save not only himself and the colonist, but also the native inhabitants of the planet from an impending supernova. Will Picard win the day, or will his Romulan captors destroy a hard won trust? Find out in this exciting prequel series to the upcoming CBS streaming release. STAR TREK: PICARD #2 from IDW Publishing. Previously in STAR TREK: PICARD: The Romulan Empire has reluctantly verified to the Federation that a supernova will destroy their worlds in the near future, and more reluctantly accept the help of the Federation in the evacuation of the intelligent life forms who inhabit the blast zone. While Commander Laforge oversees the creation of a new fleet to aid in the evacuation, Admiral Picard travels both sides of the Neutral Zone assisting the work wherever he can. When his second-in-command, Lieutenant Commander Raffi Musiker tells him they have been diverted to a previously unknown Romulan colony on the planet Yuyat Beta to evacuate ten thousand Romulan colonist, he figures the surprises just part of the Romulan dedication to secrecy. Upon arriving, he discovers that the planet has not only the aforementioned Romulan colonist, but also over five million primitive, native inhabitants, whom the Romulans have no desire to evacuate. Confronting the Governor of the colony, Jean-Luc and his second are imprisoned for refusing to begin the evacuation of the colonist and abandoning the natives. There is more going on than Picard has discovered and coming events may endanger the whole of the mission, and the entire Federation.

GIVE ME LIBERTY OR GIVE ME…

In the Romulan colony on Yuyat Beta, colony Governor Shiana host a lavish dinner with a defiant Admiral Picard as the only guest. As the Governor sips a Romulan wine made from the very vineyards that have been propagated on this world, Picard sits stoically, refusing to partake. The Governor asks Picard if his refusal to enjoy the meal is a silent protest of the situation he has found himself in, a situation that she blames squarely on him. Picard asks about his second, Commander Musiker, and is told the young Starfleet officer is resting comfortably, though confined. Picard engages in conversation with the blonde haired Romulan, asking questions, trying to understand how this woman can put the very lives of the colonist she is supposed to protect in jeopardy. She turns the blame again to Picard, claiming his instance on saving the native inhabitants and refusing to evacuate her people is what is at the root cause of their conflict. Besides, she reasons, the natives would gladly sacrifice themselves for their Romulan saviors.  Unable to hide his disgust, Romulan calls the situation for what it is, rascist, and asks to be returned to his cell to await Starfleet. The Governor acquiesces to his request, but claims that Starfleet will do whatever they want if it means getting their Admiral back. Picard begins to dress down the Governor about her attitude and assumptions, when an explosion rocks the dining room. The palace is under attack, and it is not from Starfleet sources. As his Romulan jailers begin to escort him back to his cell, more explosion hit the palace and the attackers are revealed. The native people have taken up arms and are using the attack as an opportunity to save Admiral Picard. Grabbing a rifle, Picard locates his first officer and the two, with weapons set to stun, begin to make their way out of the Governor’s palace and into the countryside. Stunned, the Starfleet duo witness the vineyards they had seen earlier in the day have been set ablaze. But even more stunning is when, in a secret place, sacred to the natives, he is greeted by tow Romulans, Zhaban and Laris. The two tell Picard they are Tal Shiar, and they need his help in saving not only the Romulan colonist, but the native people as well. There is more at stake than Picard realizes as the Governor has set a plan into motion that will threaten not only the lives of those on the planet, but all of the Empire.

MAY THE GRAPE WITHER ON THE VINE

The character of Jean-Luc Picard has been a shining light in the Star Trek universe since he was first introduced in the pilot episode of Star Trek: The Next Generation. From the actor who portrays him, Patrick Stewart, and to the multitudes of writers have scripted his on screen and print bound adventures, he is the ideal of what a Starfleet officer should be. Writers Kirsten Beyer (Star Trek: Discovery, Star Trek: Discovery, The Light Of Kahless) and Mike Johnson (Star Trek, Earth 2: World’s End) have successfully brought that feeling of honor and duty to the four-color page, and still managed to relay that hard cut edge Picard is known for. From his defiant attitude while a “guest” of the Romulan governor, to the determination as he escapes, this is the Jean-Luc we all fell in love with on the small and silver screens. Their Romulans are properly haughty and arrogant, and you would almost thing you where reading an adapted lost episode of the original series. It good stuff, but at the same time it is lean. There is not a lot of superfluous dialogue or information dumps. The script is tight and solid, and highly entertaining.

The artwork by Angel Hernandez (Transformers, Infinite Crisis: Fight of the Multiverse) is similarly tight and solid. His artwork is realistic and with wonderful anatomical correctness. The action scenes are explosive, and there is a variance of line which makes for intriguing eyecandy.

Coming in on this second issue, you’re given all you need to know with the recap and during the story.  The story itself, while seemingly simple, unfolds like and origami swan as you discover all the different layers and you really appreciate the work which was put into it. As we get to see Jean-Luc on the defensive and offensive, which is handled in classic Star Trek style. Make sure your local comic shop beams one your way.

STAR TREK: PICARD #2 is a action-packed read for Star Trek fans as well as the uninitiated.

With the spotlight on Jean-Luc, you know the story is going to be good!