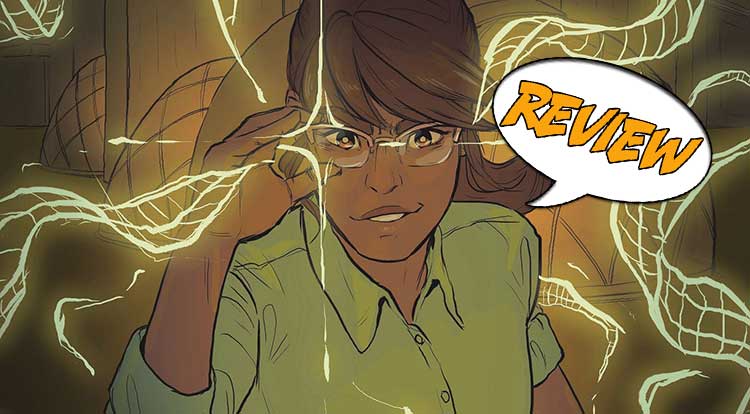 Meet Tamsin Trakroo and her friends at the Prometheus Institute who unearth a mystery and confront a challenge beyond what any of them expected. Can they pull together in time? Find out in Science! The Elements of Dark Energy! SCIENCE! THE ELEMENTS OF DARK ENERGY

Previously in Science! Imagine a world a lot like an optimistic future version of our own where the Prometheus Institute is THE High School for science prodigies, and there is a mystery at the Institute! Enter Tamsin Trakroo and her friends, brilliant young minds with their eyes toward the future – and all young people at that awkward age of growing up. School is a busy place full of romance, mystery, adventure, and, of course – Science!

LIFE IS AN ADVENTURE

Science! The Elements of Dark Energy opens, I cannot say quietly, on an apparently typical day at the Prometheus Institute. A young man (AJ) experiments with a new blend of fuel for his rocket boots and gets results he was not anticipating. (Let’s just say they’re rather explosive.) Our main character, Tamsin Trakroo, witnesses this and with some quick thinking, shuts down the boots to keep the lab from getting utterly destroyed. Right away in a few short pages we get that these kids are smart and that they’re being encouraged to be independent. I love this as a message. But more than that, we’re introduced to one of the most crucial concepts of science – testing, failing, and trying again. It’s a theme that comes back around, but I really like the way it’s handled – failure is an experience that gives you the opportunity to learn something.

Tamsin is asked by the headmaster of the school, Lucan Laveran, to assist him with his lab work on a project he had previously worked on with her father, before his untimely death. Naturally she accepts. I thought I knew where this might be headed right up until a few pages later when Tamsin brings up a holographic projection of her father, presumably an A.I., who congratulates her and accuses Laveran of murdering him. And Tamsin agrees to destroy the Institute. Wait, what? Readers, I was hooked.

There are some cool twists to the story, which is just plain fun. It keeps it from feeling like something we’ve read before. But the book also leans into the science in a few ways. There are little robots called S.T.A.T.’s (numbered, to tell them apart), and not only are they adorable, they fill us in in science facts now and again. A significant chunk of what is called science fiction nowadays tends to handwave over the science; this creative team connects with it, and I think it makes the story stronger. And Tamsin and her friends are smart. When push comes to shove, when there are decisions to be made, Tamsin pulls facts together and makes the conscious effort not to simply react emotionally, but to try to reason out what to do.

But another thing that makes this book stand out is how delightfully diverse the Prometheus Institute is. It makes it look and feel more like a snapshot of our world. I adore that there are several young women front and center, and they can be smart, practically dressed (with pockets) and still are cute as heck. Tamsin has a little flirtation/romance with Garyn, one of her roommates, and it is so sweet and nerdy and definitely romantic.

CRISP AND FULL OF CHARACTER

The art of Science! The Elements of Dark Energy is ambitious. It covers a lot of ground and a bunch of different labs, not to mention a number of characters. It’s very clear despite all the different things going on. One of the things I enjoy most about the Prometheus Institute is that while it looks like a sterile, modern campus from the outside, once we get into it we realize that it has basements and sub-basements, hidden labs, large lecture halls, and labs galore. Who wouldn’t want to poke around in a secret lab?

I love the S.T.A.T.’s. They’re robot helpers, and they show up throughout the book. Not only do they clue us in on interesting facts, but they’re lab assistants. They carry books around and do the vacuuming. They help out in the clinic and don’t mind much when students experiment on them. They have screen faces that are almost always smiling but do keep your eyes open for their expressions when unusual things happen to them.

The character concepts are solid. Like I said, this is a diverse bunch which is a pleasure. AJ and Rosalind are twins and there’s a definite family resemblance there. Everyone is distinct and they are expressive. Tamsin’s father, when he isn’t a hologram, is still present in her thoughts, but we also see him, and he expresses a lot of thoughts with his facial expressions, so pay attention to him.

Science! The Elements of Dark Energy, while aimed at a younger audience, is suitable for anyone who actually likes their science fiction with some science in it. The characters are relatable. The mystery is a good one and the solution is satisfying, especially since teamwork matters. The plotting has been executed carefully, and there are one or two points when a twist hits right at the page we would be expecting it. This doesn’t detract from the story, but if there were to be future issues, I’d like to see these flow a little more organically. And if there are future issues, I will be sure to read them.

Science – it isn’t just hard facts; it’s a methodology and a practical tool to use in life.