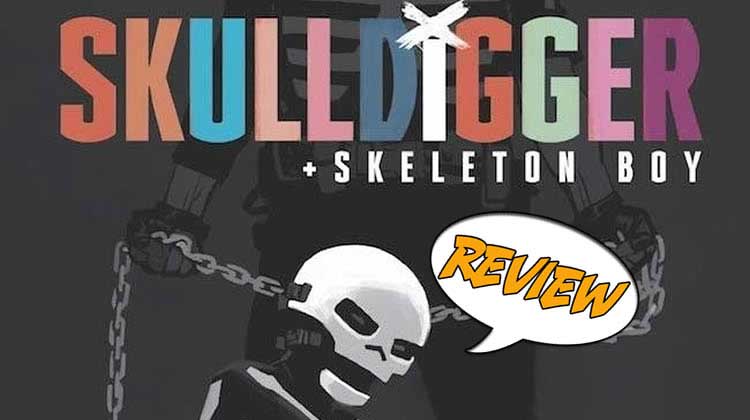 Sidekicks used to be all the rage. Originally, they were supposed to be someone younger readers could identify with. Robin was for the kids, they said. He also gave Batman someone to talk with when laying down plot points and all.

Does every masked character/vigilante who selects a sidekick do that child a favor? Or is he doing something to that kid they both would later regret?

That’s part of the story in Skull Digger and Skeleton Boy #1 from Dark Horse. SOLICITATION: Spiral City finds itself trapped in a vicious cycle of crime, corruption, and violence. With the heart of the city at stake, a vigilante rises in Skulldigger. However, when the nefarious Grimjim escapes from prison, will Skulldigger and his ward, Skeleton Boy, be enough to save Spiral City?

SHOULD CHILDREN REALLY BE SIDEKICKS?

I used to be okay with younger kids fighting along heroes older than they were. I personally never got the sexual implications of it all until a few years ago. I still don’t think that would happen as much as some believe it would.

Then I saw Batman Beyond: Return of the Joker, an animated film that would change my perspective on Robin and every other sidekick forever. If you’ve seen it, you know that Robin is captured by the Joker, who tries to turn him to his way of thinking. I never realized just how vulnerable sidekicks were until that movie. I can’t see how a hero would do such a thing to a child, particularly letting him patrol each night alone. It should never happen.

This comic by Jeff Lemire, who is one of the most prolific writers in the industry today, looks at one example of the sidekick problem. A child is rescued by Skulldigger, a masked vigilante, and he is picked by that person to work with him. The kid faces boatloads of guilt over the death of his parents, who Skulldigger apparently tried to save. The man sees something in that boy that he thinks he can use in his fight, and enlists his aid.

Interestingly, Skulldigger and his nemesis Grimjim are very much like Batman and the Joker when it comes to how each behaves. But without the trappings of having a weekly comic, Lemire is exploring other possibilities here. Even the shooting of the boy’s parents strongly resembles the origin of the Dark Knight. I don’t expect the story will follow along those well-told lines, though.

One of the most fascinating aspects of this book is that the boy and his family are basically unknowns, with very little information to identify any of them. It’s almost like their previous identities meant nothing as far as this story or the world knew.

One big difference is that Skulldigger is NOT wealthy like the Wayne family. It appears that all of his money goes into the hardware he uses, be it computers or his armor.

The pacing is similar to Lemire’s other scripts, with slower movements at times followed by bursts of action of violence. Just when you think things have hit the brakes, things take off so we’re left completely uncertain as to what will take place next. The characters are well developed even though much about them remains a mystery.

Even though this is MajorSpoilers.com, I don’t want to reveal what the boy says on the final page of this issue. You should read it for yourself. It does mean that this will be a very different vigilante tale, though, and I’m gripped!

A DARK NIGHT OF ART

There is still a lot of influence from Batman when it comes to the art. Things are dark and sullen most of the time, even when Skulldigger is trying to apologize to the boy for getting there too late. You can feel his remorse even through his mask.

Lemire’s script really gives Zonjic the chance to use the skull masks to show the sadness and often lack of emotion the characters are exhibiting. Then, too, the action sequences are so vital that I couldn’t take my eyes off them. Well done!

All this takes place in the world of Black Hammer, a series Lemire and company have been doing well with Dark Horse. I enjoyed the recent team-up/crossover with Justice League a lot, so I’m fascinated by what that universe has to offer. They can explore superhero tropes from other angles, and it’s a tremendous read!

Given the final words in this issue (which I STILL won’t spoil), this book is likely to follow a very dark path. It doesn’t look like the Batman parallels I saw in this initial issue will continue in this ongoing series. But we’ll just have to stay tuned to find out!

Interestingly, Skulldigger and his nemesis Grimjim are very much like Batman and the Joker when it comes to how each behaves. But without the trappings of having a weekly comic, Lemire is exploring other possibilities here.