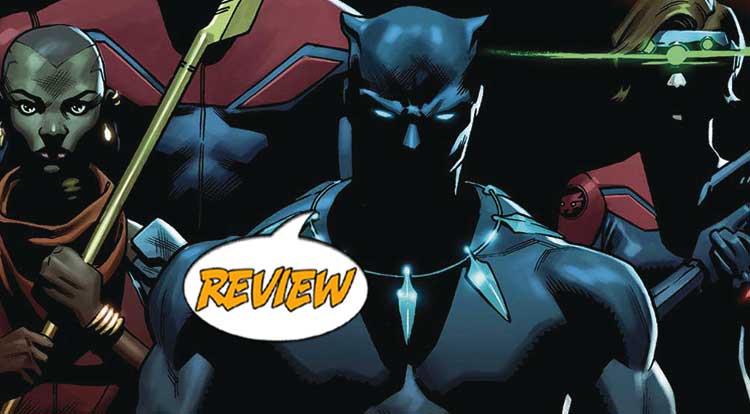 Black Panther and the Agents of Wakanda #4 Review

How do you fight a threat when the threat is the moon itself?  Your Major Spoilers review of Black Panther and the Agents of Wakanda #4 from Marvel Comics awaits! Previously in Black Panther and the Agents of Wakanda:  T’Challa and Okoye have assembled an eclectic team of spies, mercenaries, and super heroes who specialize in espionage, black-ops, and defense.  These Agents of Wakanda must be ready for any threat to our planet… even if that threat is the Moon itself!

YOU HAD ME AT ‘FAT COBRA’

This issue opens with a quick (but important) flashback to 1978, where John Jameson’s lunar transformation led him to another dimension and a short, but memorable career as Star-God! It’s quickly revealed to be nothing more than a hallucination, as John himself is floating in a tube of unknown ichor, along with several other Agents of Wakanda. Fortunately, The Black Panther and Mockingbird are still up and moving, leaving her to fight off alien tentacles (not like THAT!) while he attempts to parlay with the alien parasite that has inhabited part of Earth’s moon. As Mockingbird frees John, Okoye, Broo the Broodling and Gorilla-Man, T’Challa discovers that the creature, calling itself Entea, is the “daughter” of a planet and an Elder of the Universe, who wants only energy for sustenance. When John transforms once more into Star-God, she is drawn to his energies, causing the ol’ fighty-fighty, but he is able to break through to the Other Realm, where he once ruled…

…only to find it devastated by an unseen conflict.

THE ALL-STAR CAST MAKES ME HAPPY

I’ll say this for Jim Zub: He knows how to use a big cast, and the issue’s introduction of Mockingbird as the latest Agent is a strong opener for her. He also ties into mostly forgotten Marvel continuity brilliantly, even repowering John Jameson as a superhero for the first time in decades. The use of alien goop to give the characters visions works to not only seamlessly integrate the flashbacks and exposition (for those who aren’t familiar with Jameson’s whole history) but to give us looks into the minds of the Agents, and provide an important reminder that Gorilla-Man is actually (possibly) a betrayer! The art of Medina and Yeung is a nice blend of classic Marvel house-style and a more modern sensibility, with tinges of the photo-realism of Greg Land without the obvious lightboxing. Their Star-God looks great, as do the ruined landscapes of the other world, showing the ability to work on both a personal and a macro scale, and their Black Panther is remarkable. Best of all, though, is the final page, where groups of normal people gaze up at the moon, which now seems to have grown a face.

I very much appreciate when the ALL BIG NAMES comics like Avengers use secondary characters in interesting ways, and this book’s cast includes The Wasp, Dr. Nemesis, Fat Cobra and more, leaving them room to have fun with the rotating cast without wedging IronManCaptainAmericaThor into every issue. Black Panther and the Agents of Wakanda #4 makes good use of the characters and continuity of the Marvel Universe, with clever storytelling techniques, fun dialogue and, best of all, truly impressive art to knock one out of the park for a well-deserved 4.5 out of 5 stars overall. I’m hoping that we get more of the Other Realm, wolf-headed Star-God and Entea, but whatever happens, it’s a book with Fat Cobra, so I’m in.

It moves quickly, but never TOO quickly and the interplay of the cast is nice. Best of all, there are several brilliant-but-thrown-aside characters in play that deserve to be in focus again.