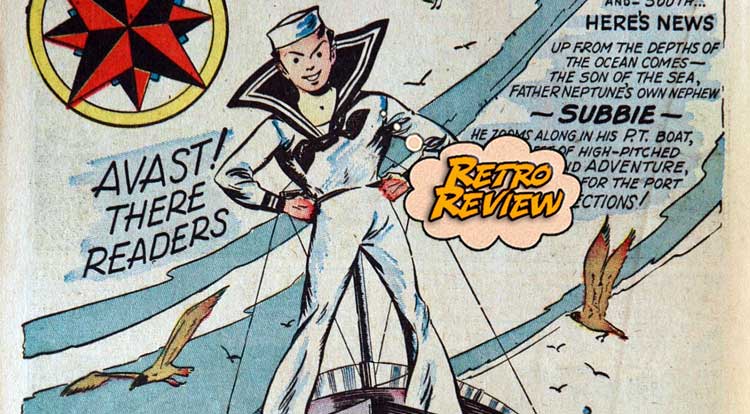 Everybody’s heard of Robin and Bucky, but did you know that the Sub-Mariner (may have) had his own kid counterpart?  Your Major Spoilers (Retro) Review of Kid Komics #1 awaits! Previously in Kid Komics:  Though comic historians sometimes use “Atlas Comics” or “Timely Comics” as a catch-all for Marvel’s Golden Age publishing history, Martin Goodman’s company rebranded itself quite regularly.  The comic adventures of Captain America, for instance had six different cover logos and four different indicia publishers during its 73 issue run.  The Sub-Mariner’s solo book had three different indicia publishers (only ONE of which was shared with Cap’s run) in the same timeframe and Marvel/Timely/Atlas/Select/U.S.A. Comic Magazine Corp et al. was legendary for chasing whatever trends might be hot.

I have NO Idea what trend they were chasing when this happened. So, an underwater boy is riding around on his stingray when he discovers a shipwreck.  Fascinated by the idea that there’s more world outside his home turf, and even up on the surface, he goes to King Neptune, his godfather, who gives him a P-T boat and a U.S. Navy sailor suit to explore the world at large, as one does.  Then, two guys crash their boats and get into a fist fight in the middle of the ocean.  Subbie saves the combative lads from drowning, after which they are introduced to him as Egbert Cortland (of the Boston Cortlands, I’m sure) and his counterpart, who wants to be known as “Beans.”  The three boys put aside their bickering when they realize that they’re on a Navy shooting range and that the odd placement of the targets will cause the battleships to wipe out their own naval convoy! Mistaking an enemy submarine for a steel whale, our boy Subbie nonetheless has the wherewithal to bring it to a halt, while Eggie and Beans use his P-T boat to warn the battleship to hold its fire.  Instead, the ship brings its massive guns to bear on the German sub, forcing Eggie and Beans to rush into danger to save their dear friend whom they’ve known for all of half an hour now. Despite taking a shell directly in the face, Subbie is fine, causing Eggie and Beans to wonder abou this origins and note how his strength reminds them of the legendary Sub-Mariner.  His triangular head and pointed ears were also a bit of a giveaway, but frankly, they’re not the brightest bulbs, so I’ll give them half-credit.  The caption box promises more Subbie next issue, and perhaps even the answers of who he is and how he is related to Namor, but that story is as inexplicable as this one.  It’s also the character’s last appearance, and his relationship, if any, to Namor is as yet unexplained.  I’m figuring that there were some wild underwater oats sown by the prince in his younger years, and that the time is ripe for Marvel to bring him back and then kill him off in terrible ways because that’s what they do with Golden Age heroes.

Speaking of which, this issue also features the first appearance of Captain Wonder! One of the Golden Agers who has the audacity to run around as a grown man in short pants, Captain Wonder likewise disappears after Kid Komics #2, but he at least was one of the doomed group revived in the pages of ‘The Twelve’ to face the modern Marvel Universe, death, dismemberment, the wrath of the underworld and modern storytelling, and while he didn’t die horribly, he also didn’t come out unscathed.  Kid Comics #1 also features an appearance of horrifying minstrel show stereotype Whitewash Jones, Chad Grothkopf’s Trixie Trouble (who has the usual Grothkopf skull-face) and Basil Wolverton’s “Flap” Flipflop, which…  It’s Wolverton, you have to see it to believe it. All in all, it’s a pretty packed issue of comics, with only one super-cringe-worthy moment in nearly 70 pages.  Kid Komics #1 is full of inexplicable moments, though, as well as some joyfully dumb comic book moments and whatever the heck is going on with Subbie, but it’s also full of Golden Age greats just sort of throwing things at the wall to see what sticks, making it an interesting and engaging read, earning 3 out of 5 stars overall.  It might have been 4, if not for the Whitewash story.

It's the most obscure "sidekick" of them all, in an adventure that... just doesn't make any sense, but it's a fun read nonetheless. Just be aware of the racist depictions you might find herein.