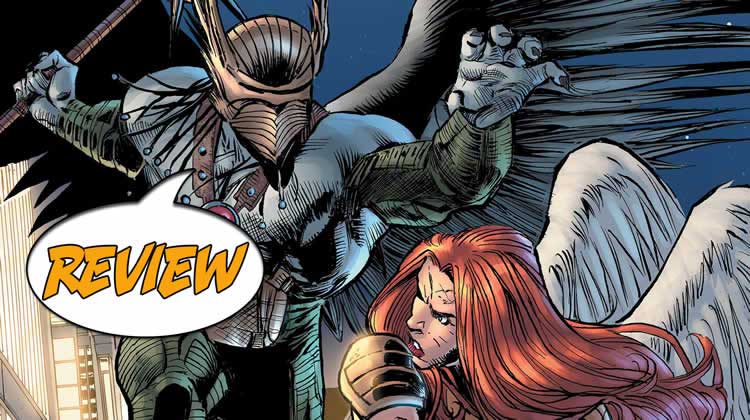 Ever since Hawkman got his new title, I’ve been anxious for Hawkwoman (formerly Hawkgirl) to come back. Well, the wait is over! In the latest issue, she’s back, and she’s facing the Sky Tyrant, apparently a previous personality of Hawkman. While I’d rather see them being more affectionate than angry, it’s still a great issue, and it fits in with the Year of the Villain event since Hawkman is now one of The Infected! SOLICITATION: She’s back! Twisted into the murderous villain Sky Tyrant by an infection with no cure, there’s only one person in the universe who can knock some sense into Hawkman–Shayera Hol, Hawkwoman of Thanagar! Sent to rescue Carter Hall from the depths of his corruption at the hands of the Batman Who Laughs, these two star-spanning partners collide in the fight for a hero’s soul. Will the goodness still lurking inside Carter Hall be enough to stop Sky Tyrant’s total takeover, or will Sky Tyrant turn the tables and reveal Carter Hall’s most lethal secret?

A RELATIONSHIP THAT WORKS

As I’ve mentioned previously, I have a thing for winged or caped characters. They seem kind of angelic to me somehow. So when I first encountered Hawkman back in the day, I was instantly fascinated and interested in learning more. Over the years, my interest grew and grew until I’m a big fan of the Hawk these days.

I’m happy that the current monthly comic for Carter Hall has made it up to number 19! Whoo hoo! I hope it keeps going!

It’s been good to have Hawkman on his own for a while to establish the character. Hawkwoman has been busy with the Justice League, but when Sky Tyrant shows up, she’s got to intervene.

Bringing in Hawkwoman now is a perfect choice because she knows what makes her lover/husband tick. In fact, one of the highlights of this comic is Mr. Venditti infusing some of their past into their dialogue. At one point, she scolds Sky Tyrant for mixing up the formula that has worked so well for them. “You’re supposed to be the cautious one,” she says. “I’m the hothead!” Those two sentences ideally describe how these two usually get along.

The battle between the two is all it should be—mace against mace, strength against strength. I cringed whenever the two hit each other. Owww!

Another great discussion happens between Sky Tyrant and Carter. At first, Carter mocks him for losing to Hawkwoman. But then Carter realizes the true motive for Sky Tyrant’s actions. And if he’s able to make it happen, it won’t be good!

At one point, Sky Tyrant tries to lull Hawkwoman into thinking he’s no longer a threat. Fortunately, Shayera doesn’t let down her guard, so when she’s attacked, she’s ready for it! Like that about her! She’s no helpless female!

The writing/plotting is very crisp and a quick read, and the people are very real to me. As always, Mr. Venditti leaves me wanting more, so I can’t wait for issue #20 next month! What will he do with these characters? I have to know!

Word is that Mr. Olliffe’s art won’t be gracing this book for much longer. I’m going to miss his take on Hawkman.

I always point out that I evaluate art based on two fronts: action sequences and facial expressions. This issue had plenty of fisticuffs and battles, so I loved how they worked. I also enjoyed the facial expressions, which clearly told us what was usually going on inside these people. Very well done!

BOTTOM LINE: DON’T GET TOO ATTACHED!

I always like to point out that this type of event is almost always temporary. I expect Hawkman to be back in the saddle again before too very long, probably early in 2020.

But I’ll enjoy the ride while it’s happening, and learn as much as I can about Carter Hall and Sky Tyrant, who is his Earth-3 counterpart. I never get bored when Mr. Venditti is writing, and this issue is a perfect example of how he keeps me on the edge of my seat during the entire issue! More Hawkman and Hawkwoman!