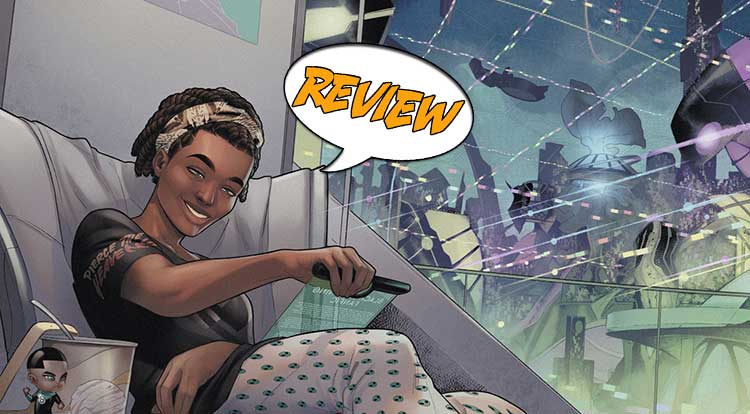 Rookie Green Lantern Sojourner Mullein continues her murder investigation. Along the way she learns some lessons: welcome and unwelcome, about her new, strange home.  Your Major Spoiler review of Far Sector #2 from DC Comics awaits. Previously in Far Sector: Sojourner “Jo” Mullein is the latest human Green Lantern and she’s been assigned to a sector far away from the usual jurisdiction of the lanterns.  She now operates in The City Enduring, a planet wide city that houses three species of survivors from a massive war between them.  To ensure the peace is kept the citizens of the city have had their emotions turned off via the Emotion Exploit. Murder has come to The City Enduring anyways, and worse than that, the prime suspect of that murder, in turn, has been murdered.

The Sociology of The City Enduring 101

Far Sector #2 begins immediately after the ending of the first issue, with Jo chasing down the murderer who just axed her main suspect in a different murder. She pursues the criminal through a crowd and momentarily up into the sky through a crowded atrium, but loses track and is forced to give up the chase. With no leads to go on, Jo returns to the second crime scene. While there she’s informed about a drug called Switchoff, that apparently overrides the Emotion Exploit.  She also meets with Councillor Thorn, the representative of one of the races in the city, The Keh-Topli. He informs her that even with The Emotion Exploit, the Keh-Topli experience great loneliness due to not being able to eat others. After that she meets up with Syzn, a police officer, and apparently a one time fling for Jo. She expands on what the councillor says, by explaining that the act of eating sentient life is a spiritual experience for the Keh-Topli. She also explains her own struggles with emotion and resentfulness for The Emotion Exploit. She then goes to meet with Councillor Marth, the representative for The Nah. She wants him to introduce her to the first victim’s  family.  He explains that there’s some bad blood there due to offenses committed back when The Nah were forced to survive on space stations and ships as clans. The councillor then becomes incredibly flirtatious and Jo realizes that he’s on Switchoff.

Issue number one of this series had a pretty quick pace, whereas Far Sector #2 cranks it down a few notches. This book spends a large amount of its pages exploring the inner workings of not only the various species, but how they interact with each other in The City Enduring.  Some of what’s revealed as the curtain is pulled back is fascinating but there’s a real “get this out of the way” approach to how the information is relayed.  By the end of the issue, there’s a lot of new info, but the plot itself hasn’t really moved much.

The world of The City Enduring is still a really nice thing to look at. There’s a strong futurist approach to the design, but also incorporates some natural synthesis.  It’s an interesting look that warrants closer examination while reading. One of the criteria I rate Green Lantern books on are the ring constructs and this series and this issue in particular is seriously lacking there.  All we get in this issue is the standard giant hand construct that must be mandated by law to show up in every Green Lantern series. On the other hand, the return of the green glow around Jo is a welcome addition to this series.

In terms of a single chapter in a larger series, this issue isn’t bad.  It reveals a lot of information and dynamics of the world.  But, in terms of being an entertaining issue on it’s own, Far Sector #2 doesn’t hold up.  Ultimately, nothing really happens and what does happen doesn’t come about naturally or smoothly. 3 out of 5 stars

If you're already invested in this series and intend to see it through, this is a good and important issue. But it doesn't stand up on its own and just isn't very entertaining on its own.