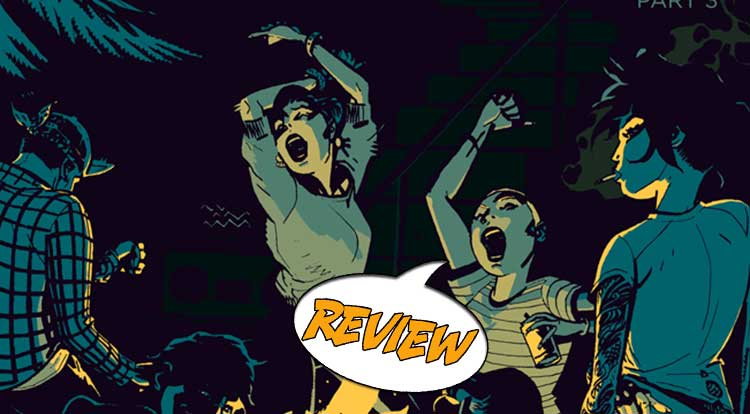 Welcome to Kings Dominion Atelier of the Deadly Arts school, where the sons and daughters of the great international crime families come to learn, play…and kill! A house party goes savagely wrong as Marcus Lopez ditches the increasingly alcoholic Maria and someone has an ax in their future…or is it their head?  Check out our fantastic Major Spoilers review of Deadly Class #42 from Image Comics. Previously in Deadly Class:  After surviving the savage Freshman Finals, orphan Marcus Lopez thought he might have escaped the hell of Kings Dominion Atelier of the Deadly Arts school with his new love, hotblooded Maria.  But Headmaster Lin’s reach is long, and the need to bring the school undone to cleanse it is strong.  No back at the school, MArcus and Maria have plans to rule the halls and bring change – but no plan survives contact with the enemy…

HIT ME ONE MORE TIME

It’s hard to think of a more vibrant title on mainstream comics at the moment than Deadly Class.  Writer Rick Remender and artist Wes Craig have married words and illustrations into a perfect blend of almost, but not quite hysteria, with the Deadly Class #42 pitching higher and higher with each turn of the page.

A feature of this issue is the heavy use of narration to tell the story.  There is dialogue, but for the main part, Remender ladles on dollops of author’s voice, to fantastic effect.  Deadly Class #42 opens with a cramping Marcus Lopez crouched over a toilet, his internal monologue not only setting the scene, but also setting the atmosphere and tone for the issue.  His relationship with Maria has begun to disintegrate, and we see Craig’s art tell the story just as well as the writing, with a hard partying Maria contrasted with Marcus’s clear jealousy.  Along the way, Remender gets to pay tribute to what is clearly his favourite film, Blue Velvet, with Craig’s rendering of a key scene hilarious and disturbing in equal measure.

ART, THY NAME IS GENIUS

It’s hard not to be completely over the top with the superlatives used to describe not only Wes Craig’s art, but the way he lays out the art on the page.  Often, he deploys three smaller panels horizontally, breaking up a widescreen image, but imparting a sense of pace and action.  This staccato art style is perfectly suited to Remender hard charging, amped up storytelling.  Coupled with Jordon Boyd’s subdued, moody color palette, Craig’s art is a reminder of the power of the visual medium to evoke strong emotions and heighten interest.

The highlight of Deadly Class #42 lies in the house party Marcus and Maria attend.  Part of their plan to take down the school is to divide and conquer the other factions their.  We see Maria finally given into her demons and hit the bottle hard and Marcus harder.  Slob Shab gets taken down by his main squeeze, in a hilarious, hysterical scene which ends with her stubbing a cigarette into his neck.  And Marcus lets it all hang out when he has enough of Fleetwood Mac’s great hit, Don’t Stop Thinking About Tomorrow and takes vengeance on a recalcitrant stereo.  And the we end with an ax murder.

BOTTOM LINE:   Deadly Class #42 is another strong entry in a compelling series that on the surface sounds like a silly idea but is in fact a compelling, fast paced story that features a cast of memorable characters always on the edge of hysteria and three seconds from each other’s throats.  Marcus and Maria’s storyline is the least interesting aspect of the issue, even though it forms the spine of what happens around them.  It is the side stories, the arguments, the violence, and the cliffhanger of an ending, that make Deadly Class #42 such a compelling issue and one your reviewer strongly urges you to go out and buy.

Deadly Class #42 is a masterclass in kinetic storytelling marked by entertaining characters and dialogue so sharp your ears will bleed. Fun, violent and frequently hilarious, it is yet another strong issue by a creative duo working at the top of their game