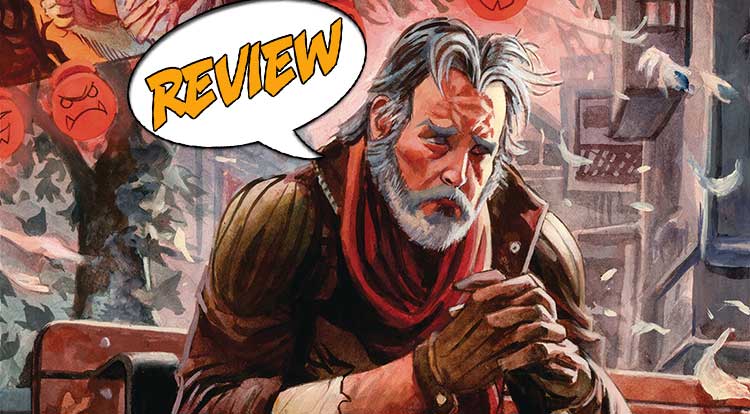 If he can subdue the Battle Sarcophagus, Boone Dias may be able to find out where Violet Bell is and what Lord Ubel is up to. How bad can it be? Find out in Ether: The Disappearance of Violet Bell #4, from Dark Horse Comics! ETHER: THE DISAPPEARANCE OF VIOLET BELL #4

Previously in Ether: The Disappearance of Violet Bell: Lord Ubel is taking over Ether and arranged the kidnapping of Violet Bell. Boone Dias investigates and is attacked by a Battle Sarcophagus. A few adventures later, he is chained to a rock while birds prepare to eat him, but his friend Glum arrives and frees him. They go after the Battle Sarcophagus again, get attacked by giant bird creatures, and work their way to  the center of a labyrinth, where the nearly indestructible creature fights them again.

USING TALES AS SLEIGHT OF HAND

There’s never a dull moment in Ether: The Disappearance of Violet Bell #4. There are changes in tempo. There are side stories and back stories. But there are always weird, over-the-top things going on as well. I think the book is a bit of an acquired taste, but if you like this kind of stuff, it really is enjoyable.

Remember the giant, inquisitive bird things we met last issue? Well, they’re out in force right from the get-go. Boone has another random creature in a jar that he can throw as a distracting snack to get them away, and in the kerfuffle, the Battle Sarcophagus gets trampled. And it has a story to tell. These stories seem to break up the momentum, except that by the time we get to the end of each one, it connects. And this world is so full of strange things that it is kind of nice to understand what some of them are.

The Battle Sarcophagus was dead, to begin with. Then he was discovered by the Rabid Cannibal Cabal. (What a wonderfully evocative name!) They had intended to eat him, but he was still alive, so they trained him to be an elite warrior instead. To get his armor, all he had to do was to pledge eternal devotion to Lord Ubel. It wasn’t until some time after this that he realized that Lord Ubel was trying to sever the connection between Earth and Ether, controlling all the information and keeping creativity at bay. The last piece of Earth influence that he needs to get rid of is…Boone Dias. Then the Battle Sarcophagus retreats into his shell again.

That doesn’t tell them where Violet Bell is. However, Grandor, an old friend, showed up last issue. He’s tough, he knows his way around magic, and he has a temper. Between a special cigarette and his own fighting skills, he renders the Battle Sarcophagus helpless, so he talks more. He tells them he was supposed to bring Violet Bell to Lord Ubel as bait to catch Boone. Then Grandor goes into a random back story, the point of which is that a mystery woman approached him while he was vacationing from adventure…

Ether: The Disappearance of Violet Bell #4 opens with a few pages of vertical panels full of the stomping legs of the giant bird creatures. It’s big, it’s bold, it’s vibrant, and Glum’s facial expressions are priceless. (Glum just has the best expressions throughout.) In contrast, there are a few small panels focusing on Boone and the glass jar. I like this as a technique to draw our eye to an important detail, because the art throughout is full of small details that are there to provide flavor, and not all of them are important.

There is so much imagination on display. “Rabid Cannibal Cabal” is a cool-sounding, if horrible, concept, and I just love that they’re dressed almost like 18th century dandies while training this living mummy to fight. Oh, and then there’s the awful feast on the Cabal members who didn’t survive fighting practice. It’s pretty disgusting with a lot of gross, darkly funny details. But wow, the transition out of this scene where we see a close up of Lord Ubel just sent chills down my spine.

In Ether: The Disappearance of Violet Bell #4 we finally learn what Lord Ubel is after, besides taking over. He’s limiting access to magic, to knowledge, and to creativity. Think about that for a second, and how bland the remaining world could be. These are stakes worth fighting for.

Earth and the Ether have a complicated relationship. What will happen if Lord Ubel can sever all their connections?