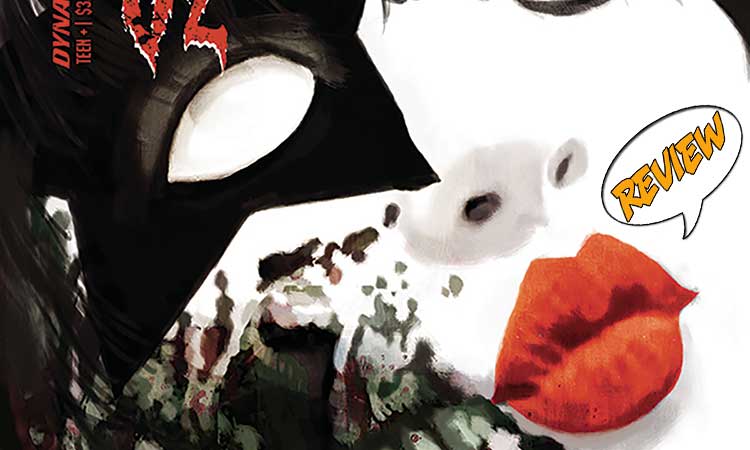 The kids from New Detroit have unleashed the mighty band known as KISS from their deep cryogenic sleep. Is the band ready to tour a world where the undead walk the streets and music is outlawed? Check out KISS: ZOMBIES #2 from Dynamite Entertainment to find out! Previously in KISS ZOMBIES: In a future where the world is overrun with zombies,  three young people watch from their sanctuary walls as their friend is tied to a stake and left to become zombie chow after breaking the law an listening to music, which is forbidden. His own father was the one who deemed his fate, and the young friends decide that they can no longer stand still for a world that would sacrifice its young to be safe. Using the signal received on a forbidden radio unit, they leave the sanctuary in secret and travel from New Detroit to a city called New York. After finally arriving, they are pursued by zombie hordes and enter The Garden in the hopes of safety. Finding a secret underground installation, they are found by the zombies just as they uncover a set of four cryogenic tubes. The zombies surround them even as the tubes begin to open, and a spike glad fist reaches out to save them. The Demon, The Starchild, The Space Ace and The Catman have awakened to the zombie apocalypse.

YOU WANTED THE BEST!

In a zombie-infested future, in the city once known as The Big Apple, Laila, Crusher and Hank find themselves corned by a zombie horde in a secret installation under the building called Madison Square Gardens. They came in search of a hope for the future and they found it. Emerging from the cryogenic tubes are the costumed and make-up glad members of the band KISS! They want to know why their sleep has been interrupted, but the answers will have to wait as they are set upon by zombies. Demon reaches out and throws on of the shambling undead into the others, and gives them group enough time to gather their wits and access a secret exit which was once used to leave the Garden unnoticed. Emerging from the secret door, Catman is quickly attacked by the undead Vin, who was once one of the Madison Square Garden security officers. Space Ace jumps to the rescue, and using a discarded hockey stick attacks the big zombie, causing him to release the Catman to attack him. Things don’t look good until the Catman re-emerges with a makeshift weapon, the blade off a ice skate, and decapitates the one time security guard. The group continues to fight their way to the awaiting tour bus but must face an overwhelming horde of zombies. After Laila declares all of the noise must have distracted them, Demon comes up with a plan. Running high onto a stair case, he begins to beat on the railing and sign out, gaining the zombies attention and making himself a target. But the Demon bassist has a plan, and has already told his fellow front man Starchild where to meet him once they get underway. Space Ace grabs some fierier supplies in anticipation of what they are facing, and the group rush aboard the bus, leaving a singing Demon to play pied piper to the zombies as he climbs higher and higher. Reaching to roof of the Garden, who prepares to enact the escape part of his plan, and leaps from the roof as he sings aloud? Will Starchild and the tour bus be there when he needs them, and exactly how does he expect to survive the very high fall from grace? And what hope can a foursome of rockers from before the apocalypse offer a world under siege?

A WORLD WITHOUT HEROES!

Dynamite Entertainment has been publishing comics based on the iconic rock band KISS for around three years, and the results have been a mixed bag. The band, who have a long history in the comic book publishing world, have most often been portrayed as mythic, god-like cosmic beings who affect the world around them in mysterious ways. Ethan Sacks (Journey to Star Wars: The Rise of Skywalker – Allegiance, Old Man Hawkeye) seems to have taken a different approach. By dropping the band into a zombie apocalypse without all of the mystic regalia that they are normally afforded, he has made them into interesting characters who you find yourself cheering for. There is a lot going on here and most of the action which is splashed on the page, thanks to the wonderful art of Rodney Buchemi (Incredible Hercules, Red Prophet: The Tales of Alvin Maker) is wonderfully presented and solid. Besides the obvious question of how the zombie apocalypse came you are presented with the mystery of what the heck was going on under Madison Square Garden and why was the band frozen in the first place?! Having them wake up as close approximations of their real world selves grounds the story and presents us with real, meaningful stakes. You enjoy the interaction of the band members with one another, and it brings back a distant time when they did not always take themselves so seriously while at the same time making you feel like you should take them seriously.

This comic reads nothing like an y of the Kiss comics I have read in the past, at least not since their early appearances in the seventies. The closest experience I can compare reading this too is when I was around fifteen years old and received a VHS copy of KISS MEETS THE PHANTOM OF THE PARK for Christmas. Like that show, the characters feel as if they are larger than life and mysterious, but grounded in their personal interactions at the same time. Unlike that movie, the writing here is much better and much more enjoyable.

KISS: ZOMBIES #2 brings KISS to the zombie apocalypse, and in doing so delivers a more relatable and enjoyable version of the characters than has been presented in many years.

KISS; ZOMBIES #2 takes the tired genre of the zombie apocalypse and turns it on its head by remixing it with one of the most entertaining bands in the world. Tune into it at your local comic ship and read it loud today!