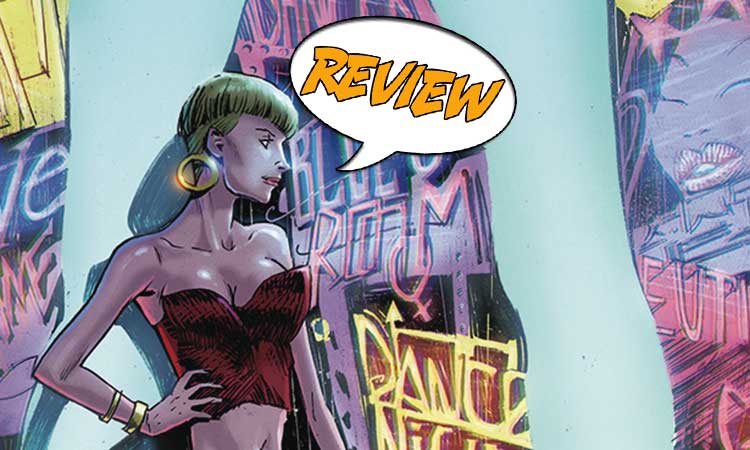 Glane Breld has a bold plan to steal the planet Heist back from its corporate controllers. Can he get the smartest of the bad, the slickest of the mean, on his side before he’s gunned down? Find out in Heist #2, from Vault Comics! Previously in Heist: Glane Breld is out of prison, sent there for a crime he was framed for by Samuel Reven, the head of Dignity Corporation. A gang called the Conqueror Crows are after him almost as soon as he lands on the planet called Heist, where he wants to put together a crew for his next job. He meets up with a street kid, Brady, whose aunt can fit him up with a brain splint. Along the way, Brady fills him in with the story of how Heist, the last of the independent planets, was sold out by a fellow named Glane Breld.

GETTING THE CORE CREW

Heist #2 opens with Glane Breld in the home of Eddy Lets. Eddy’s mother, Lera, was the ruler of Heist, and was killed in the set up that lost the whole planet to the corporations. Remember that everyone thinks Breld was responsible; this is not a friend, this is a risky ally who is temporary at best. He’s willing to play along and help Breld make connections with two people he wants for his crew, Gaville and Celene Disse.

Then the story jumps to Samuel Reven (driving Breld’s car). He is furious. His cunning plan to frame Breld for a couple murders after his arrival on Heist, thus sending him back to prison almost immediately, fell through when his hired thugs apparently all shot each other. He rails at his henchmen to put out the word and to find Glane Breld within three hours. And just why? Apparently it goes back to an insult – Breld’s grandfather insulted Reven’s ages ago. I love this detail. It is both so petty and so human.

Gaville’s entrance was brilliantly set up, and she’s a terrific character. She’s a master of disguise, and she’s really serious about it, to the point of researching the person she’s impersonating, and in this futuristic world, she’s gone back to using a fair amount of makeup, prosthetics and acting. She has also refurbished her apartment as Breld’s – not out of affection or anything like that. No, it was to help her get in character to impersonate him at a “Biggest Assholes in History” party. What a delightful concept that is! She recovered, bought, or stole a lot of his actual stuff to do this. Best of all, she also acquired Breld’s dog, Horace.

Eddy gets Celene Disse to join and finally the gang meets, and Breld tells them he wants to steal the whole planet back from Dignity Corporation. It would be nice if he could clear his name too. Then we learn about the complication. Taking Dignity Corporation to court in any fashion is out of the question due to a recent law that declares that super-huge corporations, such as Dignity, are essentially governments and are essentially above the law. Breld’s plan still requires more people, specialists. But he’s not the only one hiring at the moment.

Heist #2 is lively and full of action. The characters are all so interesting – Heist is populated by a wide variety of humanoids, and the styles are quirky and futuristic. Gaville is as open and disinhibited as Celene is focused and precise. I love that there are a couple women on the team who are so competent and so different from one another. (Gaville even makes a point about pockets, which is awesome.) Bred’s re-created apartment is also fun – retro enough to not look too futuristic, but quirky enough to not be from our point in time either.

There’s a surprisingly cute sequence when Reven is talking about his plan to get Breld sent back to prison ASAP. It is drawn in more of a childish style, as though it’s how Reven would have drawn it himself. The style may be more simplistic, but the composition is still excellent and the contrast is a terrific way to separate reality from fantasy. The overwrought emotions really sell it.

If you like this Ocean’s Eleven kind of story, Heist #2 delivers. It’s big, brash, and bold, full of smart, dangerous characters who have forged an alliance that we know could crumble at any time. Everything works together to build a thrilling story that keeps us on the edge of our seat.

A heist in retaliation for a set up in a futuristic world where mega-corporations are a law unto themselves.