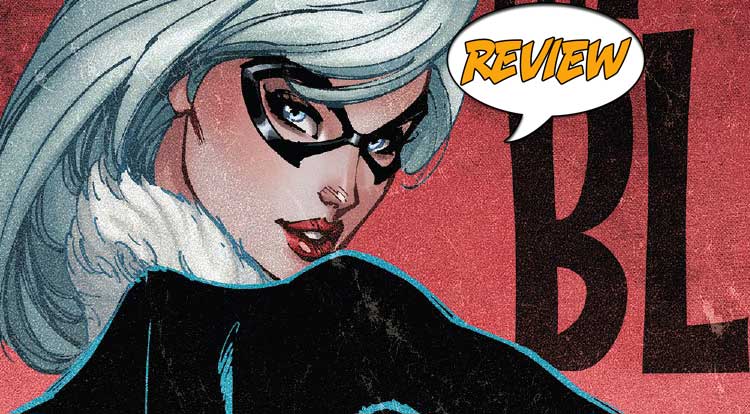 With her mentor kidnapped and the Thieves Guild on her trail, Felicia Hardy’s work has just gotten VERY personal. Your Major Spoilers review of Black Cat #7 from Marvel Comics awaits! Previously in Black Cat: The Black Cat finally takes on Odessa Drake and the Thieves Guild of New York! If Felicia has any chance of getting back her kidnapped mentor, The Black Fox, she’s going to have to take on an army of ninjas and a cabal of wizards.

We open with The Black Fox in chains, held by Odessa in her secret lair. As she questions him and/or monologues, we keep cutting away to The Black Cat, fighting her way through the underworld to find her mentor. Odessa reminds him (and, in so doing, explains for the readers) the history of the Thieves Guilds, including their founding by an immortal named Candra. He is unsurprised and even a bit impressed to hear that Odessa has completed a ritual that will make her immortal as well, granting her the control she needs to rebuild New York’s once-disgraced Thieves Guild. The Black Fox seems like he’s playing along but suddenly, the master thief, turns the interrogation against her, accusing Odessa of being jealous of Black Cat’s skill and relative freedom. Just as she seems ready to break, the skylight does it for her, and an enraged Cat leaps into the room to confront her. “No one STEALS from ME!”, shouts the angry Black Cat, vowing that she’ll walk out with her mentor or she’ll rip out Odessa’s throat, even at the cost of her own life. As the issue ends, but Felicia and Odessa are prepared… for a thieves war.

A COVER THAT’S TRULY UNPLEASANT TO LOOK AT

When I picked up this issue, I was unhappy with the garish and cheesecakey cover. After reading it, I’m actually mad about it, because the story here is tense and engaging, and I know that I wouldn’t have casually picked it up based on Campbell’s art. The history is woven into the dialogue skillfully and the interaction with Odessa and the elderly Black Fox feels authentic and compelling, the kind of thing you might see on a really good criminal drama. Even the scenes of Black Cat seeking her prey work, both in terms of building tension and Foreman’s art. The use of blacks makes her costume look amazing in action, and the soft-edges of the art make her hair and the white fur portions of her uniform luminous in all the action scenes. It’s really good-looking stuff, especially the clever redesign of her domino mask, and the end result is that I want more Black Cat from this creative team.

As someone who hasn’t ever really had a strong connection to The Black Cat as a character, this issue is even more impressive, selling her not only as a competent threat but as an antihero in the classic Marvel mold, and her feud with the Thieves Guild is an interesting hook. Black Cat #7 surprised me in all the best ways, with a really impressive art job combining with a story that delivers a lot of information in a perfectly natural manner, with the only real misfire being the cover art, for a better-than-average 4.5 out of 5 stars overall. If you only know Felicia in her recent Spider-Man villain role, this book is well worth your time.

A strong showing for the main character, the proverbial ton of excellent information conveyed, and some stellar art make this one remarkably good.