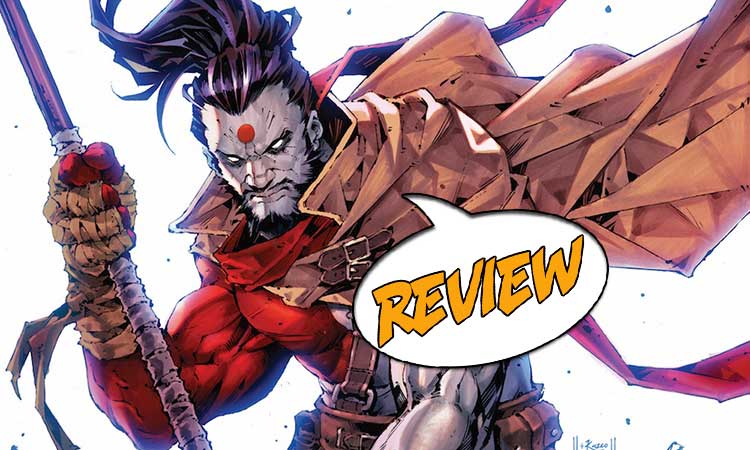 Rai and his companion have encounter a place that should not exist within the mysterious Ghost Zone. As Rai and Raijin find their first target, they get a glimpse at how the world once might have been. Will they succeed in their mission or will they succumb to the kindest cut of all? RAI #2 from Valiant Entertainment! Previously in RAI: After the fall of New Japan, Rai has undertaken a mission to destroy all of the Offspring, twelve and prevent them from being used to bring about the return of Father. To aid in that mission, he has begun to travel the land with Raijin, the artificial being who an early model of what would eventually become a human/cyber blend known as Neo Japanese Rai units. Raijin, although in the form similar to a boy of around eight or nine years old, can track the Offspring, and Rai is using him to hunt them down and destroy them. Along the way, Rai is practicing to become a human, and has taken a mentor role to the older model. Rai wishes to be a man of peace, but circumstances keep forcing his hand. Such was the case when the duo encounter the Anarcho-Baron’s after straying into their territory. Now, after defeating that threat, they move on, following a trace that Raijin has detected. However, Rai still has a secret mission he is promoting as well, and it involves his lost love, Momo.

AN OASIS IN A DESERT OF DESTRUCTION!

Following the signal trace which Raijin deter ted last issue, the wandering pair find themselves walking along a demolished city street. All around them are signs of upheaval and chaos. Towering buildings are crumbling, vehicles are abandoned, and the signs have fallen. It looks as if there was a major disaster here, but it is the eerie calmness that truly signifies something is wrong. Rai and Raijin have entered a “Ghost Zone.” Where no one lives, not even the ghost of a past long lost. Still, something is here as this is where the signal leads. As they progress along the road, neither are prepared for what they come upon. .

In stark contrast with what they expected, but find a three-story split level home, complete with a concrete path, well-kept lawn and health trees. The signs of habitation belie what they have passed through, but Raijin tells Rai this is where the Offspring signal originates. Additionally, they seem not to have noticed their presence. Quietly they enter the home. The smell of breakfast waffles greet them, as does an attractive young blonde woman in a business dress attire. Bedecked in a pearl bracelet and necklace, she looks to be something out of the past, and she tells them how glad she is to have company and offers them coffee. As she goes to retrieve the beverage, Raijin reveals the entire home is automated. Rai concludes it is the perfect place for the Offspring to hide, especially if it is damaged, which is what they think. Rai moves to question the woman in the kitchen, leaving Raijin alone in the living quarters. He is surprised by another blonde woman, identical to the first, wearing the same dress but in a soft blue. After a moment of speaking, he realizes the woman is an artificial. He accessed her system to find out more and discovered the horrible truth. The artificial women where created to take care of the families who were to live in the homes. As the homes where never built their only desire now is to take care of anyone, including a damaged Offspring and two Rai warriors. Ria feels for their plight, having been denied the satisfaction of doing the one thing they were created for. He tries to explain to the A.I. Avatar they must leave, but quickly discover the A.I. will go to any means necessary to keep her latest charges in her care.

Will Rai and Raijin escape? Will the Offspring be discovered? Will the A.I. Avatar find fulfillment and happiness? You have to pick up the issue to find out!

THE ULTIMATE HOSTESS WITH THE MOSTESS!

Writer Dan Abnett (Aquaman, Nova) has a long history of dealing with future event stories and dystopian futures. Within this title, he is pushing a new vision of the future, one in which everything from dinosaur riding scavengers to lonely artificial intelligences exist, and he does it convincingly.  Wile to plot runs rather basic, a lone warrior searching to stop the rise of a dark ruler, aided by a young protégé, there is such a spin on it that it makes it all fresh and amazing. In this issue we literally step from the barren waste into a memory, and the shock of transition is handled so well we do not even feel it is an issue. Abnett’s Rai has the voice of a world-weary warrior who wants to be anything but what he is. Raijin, despite his youthful appearance, comes off as the cynical old man. It is an enjoyable dichotomy and you quickly warm up to the pair as their weird relationship grows.

Artist Juan Jose Ryp (Clone, Lady Death) also brings this world alive with his amazing art. The buildings and backgrounds have a layer of detail that is amazing, while the characters themselves have a near photo realistic look, but without looking as if they had been digitally manipulated.

This issue of RAI has the feel of a multitude of comic and film genres. From samurai to wester to apocalyptic nightmare, it all melds together and forms a new beast of a story which cannot be easily categorized. This story gives a glimpse into Rai’s thought processes while moving along the A Plot nicely, but you also have advancement in the secondary plot of their pursuers.

RAI #2 is the samurai/western/dystopian book you did not know you needed! Make sure you get this issue and join in on the action.

Rai and Raijin continue on their path, but questions are raised about the ethics of their chosen mission and the turmoil they leave in their wake. A great title!.