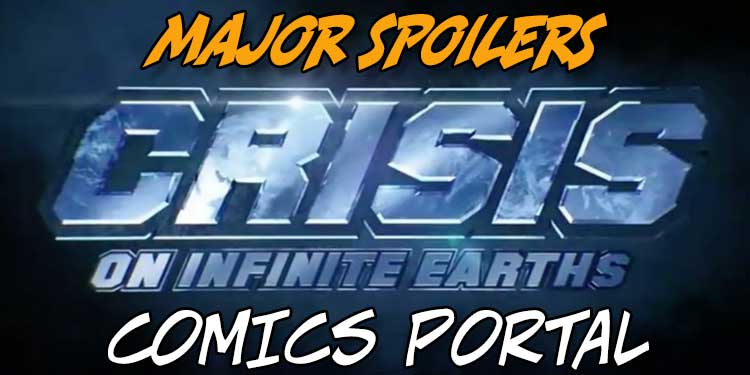 As I’m writing this, I’ve just completed watching the first episode of The CW’s Crisis on Infinite Earths event as well as the initial Aftermath show.

Being a DC fan, I loved a lot of what I saw, and am grieving for the loss at the end of that first hour.

This made me reflect on how DC handled things pre-event, and what they might have done better. And I dreamed a little bit about what could be.

WHAT DC DID RIGHT Timing-wise, it couldn’t have worked out better. DC released the eighth issue of the Crisis comic just last week. It cost a lot more than the original did, but it was the issue when the Flash sacrificed himself for the universe. Were they forecasting something for the TV Arrowverse? The description of this issue in the Diamond Previews included a mention of the TV crossover, which I thought was a good idea.

There have been a lot of Crisis-related releases in the past few months, including a trade paperback edition, which was likely affordable at $29.99. A 35th-anniversary edition of Crisis was also available, costing $49.99.

They also put out three volumes of the Crisis, which did a good job of making a lot of the whole event offered. They did cost $75.00 each, though.

As I looked through the descriptions of these last several books, though, I didn’t see any mention of the TV event. It would have been smarter to tie them in to what TV viewers were going to see.

A good move by DC was to publish a Wal-Mart Giant edition solely devoted to Crisis. One hundred pages dedicated to this crossover was probably the best thing DC did!

I did see several news stories and other coverage of Crisis at dccomics.com, including a release called “Crisis on Infinite Earths Will Change DC’s TV Universe Forever.” The story talked about how the people working on the six shows wanted to include homages to the original comic. And that first hour did a lot of that.

Also, you can be sure these shows, as well as this event, will be coming to the streaming DC Universe sooner rather than later.

WHAT DC DIDN’T DO RIGHT I understand that this was a big thing for DC, and they were getting a LOT of attention. However, publishing a $500.00 version of the Crisis comics was way out of the range for most fans. Yikes!

I wish there had been move coverage of this event at dccomics.com. There were a few stories, but this was a HUGE opportunity to bring fans who wanted to know more to the comics.

And I realize that the TV shows did their own massive advertising campaign on The CW. It always bothers me when they never even mention the comics. If DC could have run something that directed fans to the local shops, I believe that would have been golden. “If you like this event, walk don’t run to your local comics shop for more!” would have been a great way to do it! Or even pointing them to digital comics services like comiXology would have been smart.

I also have friends who believe TV shows and films based on stories from other venues MUST follow that story in every way, or it’s not worth watching. Me, I prefer something new that fits the method of storytelling. Comics don’t always translate to movies. Just ask Frank Miller about The Spirit. I’d like to get those two hours back! I watched the Aftermath show, and one of the points Kevin Smith made was that many of us fans dreamed about a crossover like this for decades. Now it’s happening!

There are still many dreams I have that I’d love to see realized!

What about the DC CW TV shows teaming up with the Marvel Avengers characters? I would LOVE to see something along those lines happen!

Or if the TV or movie formats didn’t work, maybe bring in the actors to voice these characters for an animated series? Even if it was a once-a-year event on DC Universe or Disney +, it would attract a lot of fan eyeballs for sure!

You have to wonder what kind of crossover The CW will make happen next year. How can you top this one? Infinite Crisis, maybe?

I have written before about the value of crossover comics. They attract fans who may have only liked one of the characters involved. After this book, maybe they’ll check out the comic featuring the other heroes.

Comics have more recently been telling smaller, more personal tales. It is what readers want, I hear from other fans. I still think, every once in a while, a comics company should blow the limits out and do something spectacular involving many of their heroes and villains.

But there’s a danger in doing that. If you go to that well too often, fans will get tired of it. I think there were good reasons for the Justice League and the Justice Society to interact only once a year. It made those issues special and very enjoyable.

Fans can be kind of a fickle bunch at times. We want something big and wonderful, but we don’t know what. Or what we want can’t happen (like my constant desire to see the JLA and Avengers cross over again).

I still think companies should challenge themselves every so often and try something new or different. Crossovers get a lot of attention, so why not?

THE ‘CRISIS’ FANS WILL SOON FACE Over the next two nights, we’ll be treated to two more Crisis episodes. Then it goes away until early January.

What, the screen will go dark in the final moments, and we’ll be left to wonder if the shows will ever come back? Or could they look completely different?

I’ve often watched TV channels do this, then face dire consequences. For instance, CBS’s Jericho was flying high until they hit their mid-season finale. When that series returned just before February, less than half of the viewers were still watching.

This is the challenge you run into when you break an event in half. People still want to watch something, so they might move on. It’s like when a comic comes out late. The habit to watch or read might be broken, and that can be disastrous.

I hope the numbers will be good for Crisis. I fear that some viewers just won’t watch because of that big break. People want to see things wrap up as soon as they can.

I applaud The CW and DC for making this event something special. I’m hopeful that the moves they’re making will be smart ones for everyone of us.

What do you think? Are you watching Crisis? Are you watching the Aftermath follow-up show? What could DC have done better to benefit from what The CW is doing? Should they be doing any of that at all? Whatever your opinion, feel free to share them in the space below!