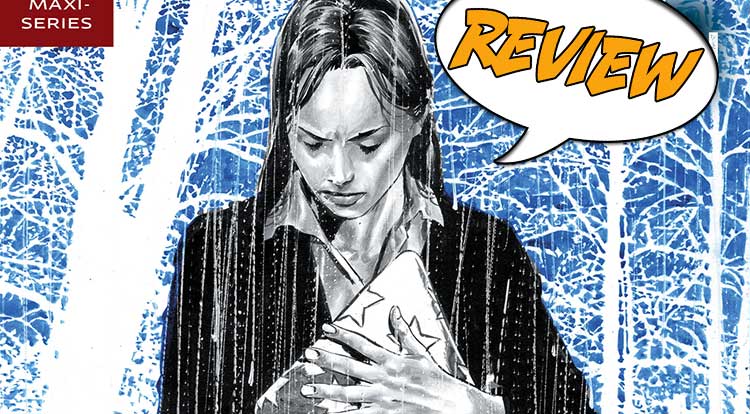 Lois Lane is not a superhero. But she may as well be, given her ability to navigate through tremendous difficulties in a superheroic world. Take the jump for our review of Lois Lane #6 from DC Comics. PREVIOUSLY IN LOIS LANE: The current 12-issue miniseries has been following her solo adventures as a journalist, but this month, they take a break to catch up with a serious blow to her that took place in a different miniseries. That one had to do with Event Leviathan.

It’s not a secret any longer that Lois lost her father during that story. This issue shows her dealing with that sea change in her life. It’s not easy, even for the usually unflappable Lois.

What kind of woman could stand up to being the wife of the Man of Steel? One who has a strong personality of her own, and that often means she leads by example.

I always harken back to the great Kurt Busiek story in which Superman was so busy saving the world that he was going to lose his own job at the Daily Planet. When Clark finally made it home to Lois, he was dejected, sure he had been fired. Instead, Lois ghosted the necessary article for him. Turns out even Superman needs help now and again!

That relationship is one of the very best in comics, I feel. Instead of trying to “trick Superman into a caring relationship” as she used to do, she’s now someone I admire, able to take care of things the Man of Steel cannot, such as relationship issues.

This miniseries has been a great return to seeing Lois in her element, including seeking out the truth for publication in the Planet. I’d love it if she’d get an ongoing series, but we’ll see if that happens.

Thankfully, Mr. Rucka and team were able to move into this very touching story that follows up and shows how she deals with adversity, such as losing the father she didn’t always get along with.

This issue includes several flashbacks that deal with Lois and her father during significant chapters in her life.

The one I liked the most was when Lois and Sam were finally talking about how Lois confided in him about Clark’s alter-ego. Oddly, her father walked away from Lois and her family. The two discuss why that happened, including the fact that Sam felt betrayed by Lois lying to her for years about this situation.

It was a true-to-life moment for two fictional characters that rang so true that I felt like I was watching two very real people discuss one of the most important things that ever happened between the two of them.

I was touched and felt sorry for them both.

Of course, when we get to the final pages of this issue, we see Lois finally release her pent-up emotions when she’s with Clark, and I was choked up as I read it.

I have to give credit to Rucka and company. They turned a character I’ve read stories about for years move me as if she were a friend of mine.

I always point out that I evaluate art based on two fronts: action sequences and facial expressions. This issue didn’t really have much in the way of battles or fights, but there were a lot of verbal skirmishes between Lois and Sam. What made them terrific was the facial expressions. I had to wonder if they were based on photographs of real people, and not just simple comic drawings. It conveyed the power of the script superbly, if I may use that word.

The last page really struck me. That’s when Lois and Clark are alone, and she can’t keep up her stoic appearance any longer. The colors are dark, and Clark’s look of sympathy can only be matched by Lois’ finally dealing with her loss. It felt like I was watching a real married couple, it was so strong.

I consider it quite the accomplishment to make a non-powered character live and breathe the way Lois does in this book. She’s like the characters on the classic TV show St. Elsewhere. When that show left the airwaves, I felt like I had really lost a lot of dear friends. Lois is just like that to me, particularly in this miniseries.

I do hope there will be more Lois storytelling in the months and years ahead. The team on this book is really doing a powerful job of helping us understand her and root for her in the best ways. When she succeeds, we feel good. When things hurt her, we are touched very strongly. More, I say! More Lois Lane stories, please!

I consider it quite the accomplishment to make a non-powered character live and breathe the way Lois does in this book.