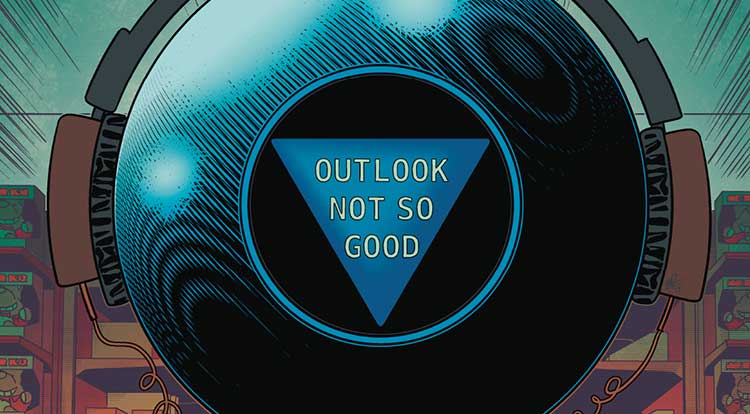 Everything has made life much happier for Holland, except for a very few people. But will they live long enough to find out why they’re miserable? Find out in Everything #4 from Dark Horse Comics. Previously in Everything: An amazing store (like our big box stores today) has come to Holland, MI and nothing is the same anymore. For most people around town, life with Everything is good and they are happy. For a select few, life has gotten…strange. Lori is obsessed with orange and blue, especially paint chips. Shirley, who works at Everything, listens to and talks to a stuffed bear. The city manager, Eb Friendly, seems constantly ill, as do his children. And this all has to do with what is in the basement of Everything.

SLOWLY MORE OF THE TRUTH IS REVEALED

Everything #4 starts with a town hall meeting where everyone appreciates Everything so much that they vote to let the store expand however it wants. There is one lone dissenter, Reuben, and he is run out of the meeting and chased into the woods.

Lori has ground up the orange and blue paint chips and drank them, and they give her a mind-expanding experience. Something tells her she must go to the lighthouse and go there she does, only to find an old blind woman who claims that she has been waiting for Lori her whole life. This woman painted the fence. And in the basement of the lighthouse, she is growing flowers, perhaps? Orange and blue flowers. The old woman, Sarah, talks about how they can be used to open one’s mind, if it’s the right kind of mind, like Lori’s. But that’s not what Lori wants. She has a brain tumor. Her life is the pits. She just wants to be happy.

Eb’s wife leaves him. It’s too sad at home, she tells him. The kids are sick, and Eb now has some sort of skin infection on his face. She walks out, and he see an enormous parade of ants in his home. Speaking of parades, Everything has decided they want to throw a huge parade. Eb is a bit uncertain about this, and he takes Shirley aside and talks with her a little about how he’s been doing since he almost died in the store. She makes a comment about how people sometimes hear something wrong. She later has a little conversation with someone else from the store who reminds her that anyone who is not “receiving correctly” must be eliminated.

Lori goes to a bar where she happens to meet the guy from the stereo store. She finds she has a handful of the flower petals in her pocket, and the orange and blue colors catch his eye. She sees him working through some acoustic algorithms. He talks about how the sound frequency of the town has changed. She wonders if colors might have harmonics and talks about the music she’s been hearing. It’s the classic moment from sci-fi horror when two people who aren’t affected by the aliens meet and realize it, except that she walks away.

Lori just wants – desperately wants – to be happy and she goes to Everything where she runs into Shirley. Shirley looks into her eyes and can somehow see the brain tumor. She knows she’s not supposed to help the people here, but she wants to. And she makes Lori’s tumor disappear.

TRIPPY WITH A THIN VENEER OF THE ORDINARY

As I read Everything #4, I was so happy to see that the color themes actually do have meaning. Those color themes, once you catch onto them, keep showing up. Sometimes it’s overt, such as the flower petals. Sometimes it is the play of light and shadow. The opening scene with Reuben is just a town meeting, but the shadows are decidedly blue, and a lot of the background is orange. Likewise, the lights of the lighthouse, as seen through Lori’s eyes, are blue and orange. When Lori is in the bar, her shirt is orange. The shadows are blue, and the light makes people’s faces look blue.

The mood fits, the lettering and sound effects fit, it all works together to take such normal scenes as life in town and shopping at a megastore and give them creepy overtones.

BOTTOM LINE: THE HEAD GUY IS ON HIS WAY

The narrative in Everything #4 is starting to make connections. There’s definitely some kind of mind control at work. This has all the feeling of a classic sci-fi horror movie of the era and continues to be weird and fascinating.

Everything has everything you might want, but if you’re not happy, they don’t want you.