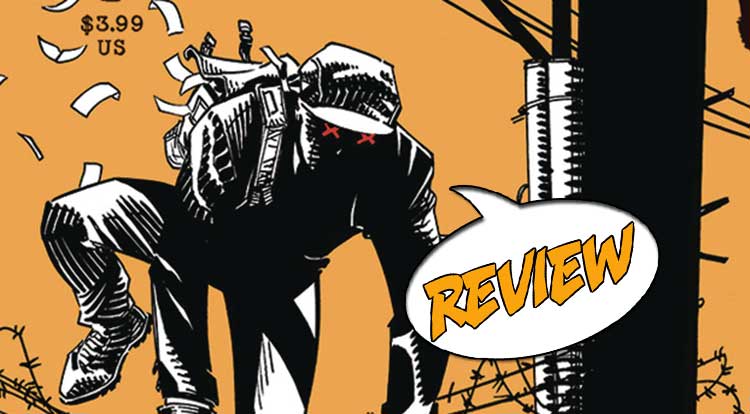 Dobbs is able to pay for his wife’s ongoing medical bills with the proceeds of his first bank job since putting on the Dead Eyes mask for the first time in twenty years.  But trouble is piling up, as Wheels, his driver from the previous issue, is in hospital.  And the Mafia have come visiting.  Will they bring roses or a horse’s head?  Find out in our Major Spoilers review for Dead Eyes #3 from Image Comics. Previously in Dead Eyes:  the criminal vigilante known as Dead Eyes retired twenty years ago, but now his wife’s medical bills have forced him to don the mask once again.  After a bank job goes spectacularly awry, Dead Eyes barely escapes with his life, while his driver ends up in the same hospital as his wife.  A visit from the Mafia, convinced Dead Eyes stole $10 million dollars from them in the Nineties, spells trouble for everyone…

Much like his main character, the writer of Dead Eyes #3, Gerry Duggan, takes no prisoners.  The American health system is very much in his sights, particularly the endless opportunities to grind as much money from patients as possible.  Twenty years retired from a life of crime, Dobbs is forced to don the mask again when his wife’s medical bills steadily mount to unpayable-by-normal-means levels.  Costs not associated with medical treatment, such as access to at television or wireless internet are pinpointed as especially egregious.  All this makes what would otherwise be a by the numbers crime drama much more interesting than it might otherwise deserve.

The template for Dead Eyes is firmly set – circumstance forces Dobbs back to commit criminal acts to fund his wife’s treatment.  Last issue it was a bank heist, this issue its violence against organized criminals with a view to finding hidden cash.  While there is a same/same feel to the story, it is told with such verve and vehemence that it tends to wash away any sense of familiarity.

Dead Eyes is an interesting criminal – a sort of modern day Robin Hood forced by circumstance, and a flawed health system, to commit crimes to help others.  It’s an interesting conundrum that Duggan posits – which is the greater crime – being forced to lose your house to fund what should be a basic right (affordable healthcare) or go out guns blazing to steal the money to pay for that medical care?  I mean, crime is wrong, but who is robbing whom in this equation?

There a very good sense of pace through Dead Eyes #3, which picks up from the previous issue and never lets up.  Dead Eyes is a clever criminal, often working by the seat of his pants and using local resources to help him get through the current situation.  Thus, with the Mafia visiting Wheels in hospital, judicious use of nitrous oxide makes for a riotous and very painful looking, scene where laughter and pain erupt into a violent confrontation.

YOUR PAIN IS HIS ART

As much as Duggan’s politics and writing are in your face, so is John McCrea’s art.  Straight lines, expansive angles, good use of shadow and a refusal to flinch from depicting the effects of violence make Dead Eyes #3 a kinetic, in your face experience.  The violence is made visceral by the realistic depiction of characters, which works hand in hand with the no-nonsense dialogue and narration.

Dead Eyes #3 feels like one long angry rant at the pernicious American health system that seems bent on bankrupting its patients more than healing them.  The response is purely American – a lone anti-hero takes up arms to help the little guys being crushed underfoot by big business.  Dead Eyes is a hero for our times – flawed, violent and unapologetic.

Another entertaining issue that ponders the flaws in modern society and a wrong, if understandable response. Great artwork and some punchy writing and action make for a thrill ride of violence, cutting quips and inventive use of machinery to exact revenge on those who would take down Dead Eyes.