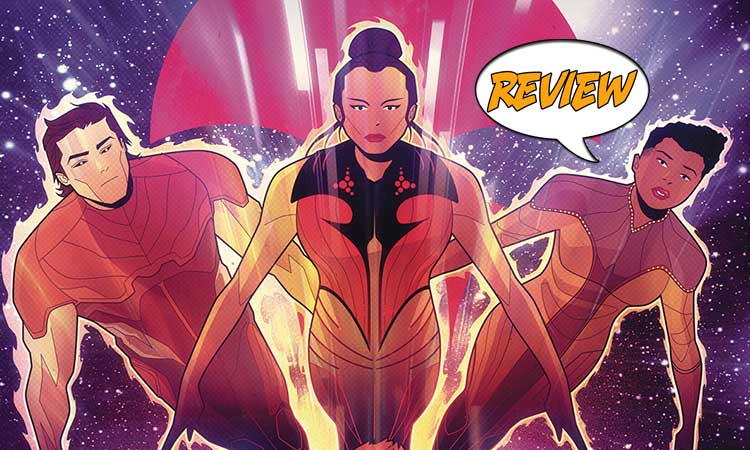 A power struggle in remote space is actually hurtling toward Earth. Is there certain destruction in the near future? Find out in Psi-Lords #7 from Valiant Entertainment. Previously in Psi-Lords: The four astronauts from Earth (now Beacon, Tank, Artisan, and Hazard) are on trial in the Gyre, only to have their trial devolve into a combination of trial-by-combat and gang recruitment. Behind all of this are the Starwatchers and the Psi-Lords, who may be trying to keep people safe, or who may have their own ulterior motives. What is finally known is that Nihilio, the star the Gyre orbits, is dying and it is on a collision course with Earth. And somewhere in the Gyre, there is an experimental fusion bomb.

THE IMPENDING DOOM ON EARTH

Psi-Lords #7 opens on Earth where a superhero (perhaps) drops in to see the Brigadier General. I do like that she’s a woman, and as tough as she is, she’s in a bad situation. We now know just where Nihilio is – at the Kuiper Belt and hurting toward Earth. She is part of the group that sent the astronauts originally, but they’ve lost contact with them and have no clue what’s going on. Something I really respect about this book is that they’ve set up a hopeless situation for the Brigadier General and she recognizes it as such. There’s literally nothing more she can do, and she accepts this. She called Aric (the hero) here to tell him to get off Earth while he still can.

So just what is going on around Nihilio? Between Starwatchers and Scion and Wardens and Psi-Lords and Dr. Patience, it is still somewhat confusing to try to keep track of who is doing what. Scion has the fusion bomb, though, and a couple Starwatchers handcuff him and go with him to collect it. They cannot detect it, somehow. Then our four heroes show up. They grab Dr. Patience in order to force him to divert the planet away from its current trajectory. As he tries to reason with them, Scion sneaks away. His little alien pal who coats things in special crystal has hidden the bomb, and now release it.

Scion steals Dr. Patience’s ship and heads back to the Starwatchers, who are already fighting the rest of the Wardens. Artisan and Beacon use their powers together to fabricate a ship so they and Dr. Patience can go after Scion. But they’re too far behind him…until Artisan calls on Ravenrok. Needless to say, Dr. Patience does not recommend this, but Ravenrok lets them tap deeper into their powers. Will they be able to reach Earth in time?

SUCH A LOVELY DAY ON EARTH…SO FAR

The art of Psi-Lords #7 continues to be one of its dependable strengths. It’s solid not only in the settings and the characters, but all the way down to small details. The opening sequence has the Brigadier General in some deep shadows, adding to the atmosphere and reflecting her mood, and these are quite lovely. She is also drinking, and there is a bottle and a goblet that are prominent. Glass is not easy to draw well, and this is top-notch.

We see more of the space around Nihilio and there’s some very pretty use of color not only for the biomes around the Gyre, but also for space itself. Artisan’s powers manifest in yellow-orange, a perfect choice for the contrast against the space backdrop. Ravenrok brings in deep purples and magentas. All that color helps enhance the mood in addition to delineating things. This continues to be a book that is luscious to look at.

Psi-Lords #7 finally knits the threads together and solidly presents the stakes of the story. While I kind of like the slow build up, it had to go through some confusing moments to reach the clarity we finally reach here. This has become a huge dramatic story with gorgeous art that is up to the task.

And in the most-wanted enemy competition, Scion pulls out a narrow win.