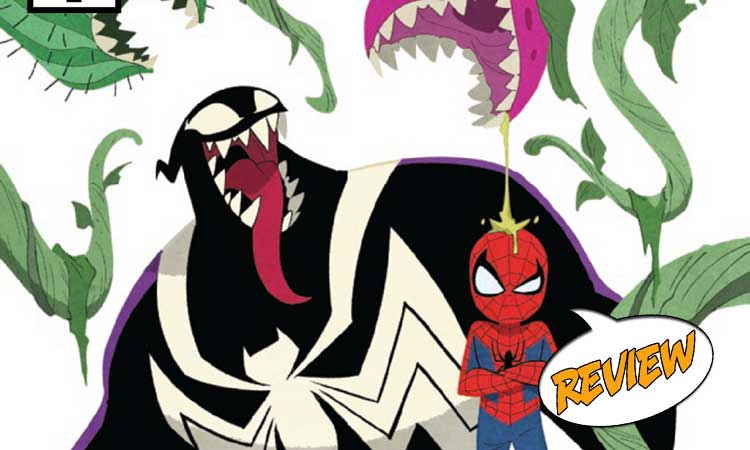 By Jonathan Cadotte on December 5, 2019 0 Comments

Super roomies Spider-Man and Venom both have their fair share of problems to deal with and just to top it all off they’re not even in their own bodies. Your Major Spoilers review of Spider-Man & Venom: Double Trouble #2 from Marvel Comics is waiting… after the jump! Previously in Spider-Man & Venom: Double Trouble:  Venom has gotten himself in a bit of a jam with Green Goblin.  Spider-Man, can’t cover rent on his own. The two have come to an agreement and have become roommates.  Unfortunately, Venom isn’t exactly a model co-habitant and has used his newest invention to swap bodies with Spider-Man.

This issue opens up with Spider-Man (in Venom’s body) searching the apartment trying to figure out why he’s not in his own body.  After finding a note from Venom (in Spider-Man’s body), he’s confronted by Green Goblin who’s after some mysterious something that Venom owes him. Meanwhile, Venom has taken his roommate’s body for a spin in an obstacle course game show a la American Ninja Warrior, which turns out to be offering a very unusual first prize.  Spider-Man manages to get a hold of Ghost Spider, who informs him of Venom’s shenanigans with his body.  Venom moves on to the finals, while Spider-Man destroys the drones that Green Goblin sends after him.  Yet, as Spider-Man vows to get his hands on Venom, Green Goblin gets a good shot on him and sends him falling to the ground.

Is This A Cartoon Pilot?

One of the things that stuck out to me in the first issue and that has continued here, is how much this series really does feel like a television show. The dialog is really punchy, it has that sitcom feel where everything seems to be leading up to joke.  It’s basically The Odd Couple, where Spider-Man is Felix Ungar and Venom is Oscar Madison, toss in a bit of Freaky Friday fun and you have a formula that hasn’t overstayed its welcome yet. It’s still fun to see these characters re-imagined in this way..

While the setup and concept are fun, it’s the art that really sells it.  This book has a look that is makes it seem like it could be a comic adaptation of a 90’s Cartoon Network show.  It’s bright, it’s fun, the character designs are exaggerated and silly.

The Bottom Line:  A Fun Take On These Characters

It’s goofy, it’s cheesy, but it’s fun.  The big idea behind this series is basically a retelling of an old sitcom, but being that this is issue two of only a four-part series I don’t see this overstaying it’s welcome.  If you’re looking for a nice breath of fresh air from the usual comic goodness, this is a good one to check out. 4 out of 5 stars.

There’s not a whole lot more that needs to be said about Spider-Man & Venom: Double Trouble #2 other than, it’s basically Freaky Friday and The Odd Couple with superheroes and villains. It’s a good time.