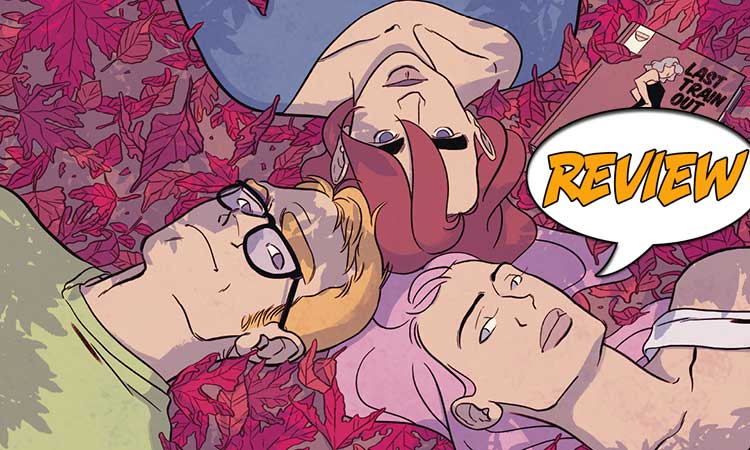 Lana learns who killed Betty, but why was her body never found? And where is Lana’s grandmother? Find out in Ruby Falls #3! Previously in Ruby Falls: Lana investigates a cold case, the disappearance and possible murder of a young woman decades ago. Lana is attacked, and her grandmother, Clara, goes missing from her nursing home on the same day. Lana is involved with Blair, who works at a strip joint, but in her investigation, she has been flirting with Raymond so that he will help her. They find a couple still living in the area of town Betty was from all those years ago. They remember Betty – but differently. Was she a free spirit, independent ahead of her time? Or was she trouble, someone who got what was coming to her? Clara has gone off to the old train tunnels where her memory shows her the parties that used to happen there.  And so far, all roads point to Marty Byrne, former gangster.

WHAT GOES AROUND COMES AROUND

As we dig deeper into the story, Ruby Falls #3 is about fallen women in several different takes on the meaning. I think if you look at most of the female characters, they have each suffered some kind of fall in their life, figuratively or literally, and they have also found themselves trapped in Ruby Falls, much like Betty of long ago. Can the cycle of history be broken?

Lana has found Marty Byrne, now 93 years old, oxygen dependent, and living in a cluttered trailer home. She confronts him and mentions jail, which is honestly not that much of a threat. Isn’t he already living a confined life? She irritates him enough that he draws his gun on her. As he goes to shoot, she instinctively flings the trophy she is holding at him. Byrne’s cannula is knocked loose; Lana gets the gun; Byrne’s dog attacks her. He calls the dog off and she helps him with his oxygen. He knows who she is; she knows he was involved with Betty’s disappearance. At this, he wonders why. Why does she care about someone who has been dead for years, that no one cared about then?

That fateful night, Betty’s husband came in and found her, and hit her with the trophy. Then Marty hit her again to get her to stop screaming. Lana’s great-grandfather was involved, and Clara, a little girl at the time, saw the whole thing.

Lana goes back to town with her knowledge and is picked up by the police on suspicion of carrying a weapon she doesn’t have a permit for. They too know she’s been looking into Betty, who was, in their words, no angel. Lana says that if she had been from a rich family, someone would have cared. (That echoes so true even today.) But her parents both show up, her father to let her out and her mother to be critical of her. But this is a small town so even after she gets out, she has to face the reactions of some of the other people in town. This is a very human book with people misreading situations, doubting themselves, doubting others around them.

Clara is in the tunnels, alone with a young guard whom we know intends to kill her for Byrne. She talks about having to clean the floors and the spittoons. They travel by boat through the tunnels, and when they get out, Clara gets a sense of trouble, grabs one of the oars, and hits the guard. “Last train out,” she says, a reference to a book Blair is reading about a similar town with a young woman who wants to leave.

That’s a deep question. What do you do when you really want to leave a situation, but you don’t have a lot of options? What sort of risks are you prepared to face? And how will your departure affect those around you?

The art is solid in Ruby Falls #3. The linework is clean and simple, the coloring moody. I do like the way color is used to help tell the story. There’s more shifting into the past, more scenes of what happened back then, and those are set apart by color, generally shifting the palette into blue tones. Even though blue is also used for night-time and in the caves, those are more saturated. The memories are more washed out, almost ghostly.

Scenes with Blair, on the other hand, are much more colorful. During day, the panels capture all the warmth of a pretty autumn day, as though Blair brings brightness into Lana’s life. Blair has gotten caught up in the mystery in her own way, and she comes across as very strong in this issue. I like how resolute she is after Lana comes clean and tells her everything that has happened so far.

BOTTOM LINE: THE THREADS ARE TIGHTENING

Ruby Falls #3 is a mystery with a strong sense of aloneness at its core. There are so many women who are held apart from their community or family, all in their own different ways. I like the way it deals with this while yet spinning a mystery plot.

Lana is one step closer to finding out what happened to Betty, but can she straighten out her own life?