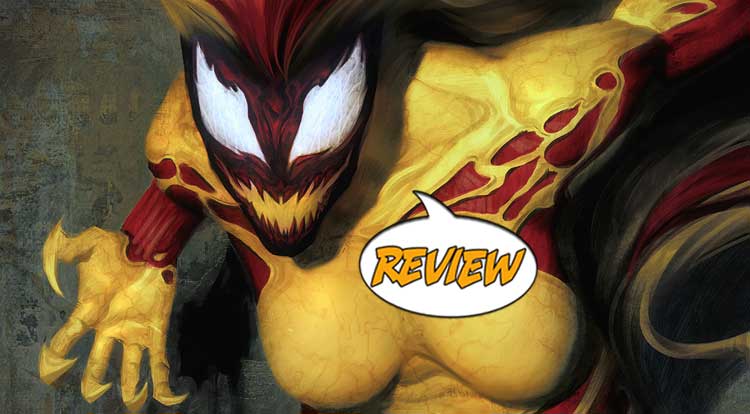 There’s a new symbiote in town, and she’s as dangerous as Venom or Carnage.  Your Major Spoilers review of Scream: Curse of Carnage #1 from Marvel Comics awaits! Previously in Scream: Curse of Carnage:  After the events of Absolute Carnage, what remains of the Scream symbiote as it was before? Does it even have a host?  What are their intentions? And what will a pair of web-slinging wallcrawlers have to say about it’s presence in New York?

We begin with a body, washed up on shore, and the requisite tough cops who have to secure the scene.  This body isn’t just another floater in the East River, though, as she has somehow been half-transformed into an aquatic nightmare, bearing elements of crustacean, eel and fish alke, all horribly mutated and very dead.  Elsewhere in the city, a young woman named Andi Benton finds herself essentially homeless after the recent symbiote rampages through the city.  She’s also the host of the Scream symbiote, a red-and-yellow creature that wants to talk to her and also to rip people to shreds with its terrible talons.  After a night spent in May Parker’s F.E.A.S.T. shelter (which resembles its video game counterpart more than the comics version here) Andi visits a club, where she starts a fight in the mosh pit before encountering would-be criminals in the alleyway and letting Scream rip them to pieces.  As the issue ends, though, our down-and-out hero is discovered by someone claiming to be her mother, hugging her almost against her will as her symbiote starts to panic that Andi will abandon her.

GRIM AND DARK AND 90s CHIC

Had you shown me this book without context and told me that it was a 1990s Spider-book that I missed, I would not be at all surprised. Mooneyham’s art evokes Mark Bagley’s classic Spider-Man work, with much scratchier linework and overuse of deep black pools of shadow.  The Scream symbiote looks pretty good, but it’s also (by design) a big pile of gloop across a human body, and the marine monstrosities that keep popping up to attack her are ill-defined, overly-dark angled shapes.  I’m very impressed with some of the facial expressiosn in the issue, but overall it’s muddy, retrograde and not at all attractive to me.  The story feels equally familiar, especially for anyone who has seen Venom’s recent film outing, and I was very unhapy when Scream began snarling at her would-be assassins that this is “our body”, co-opting some very charged and important language for a not-particularly-deep superhero fistfight.  What’s more, much of the dialogue feels overwrought and overwritten, especially Andi’s internal monologue, which feels like another 90s throwback.

That’s not to say that it’s a complete failure of an issue, but there’s a very specific tone that this issue strikes, and it’s terribly familiar and not particularly interesting to me as a reader.  Scream: Curse of Carnage #1 has some things going for it, and readers who are looking for something like Tom Hardy’s ‘Venom’ flick or who miss Wolverine’s solo title will likely find something enjoyable in these pages, but the combination of grimdark, scratchy art and a bit too much melodrama tallies up to 2 out of 5 stars overall from me.   Having a female protagonist makes for a new twist on the Venom/Carnage mythos, but this issue doesn’t really take advantage of it in a meaningful or entertaining way.

If you're a fan of 90s symbiote stories and all the baggage that comes with them, this may be your thing, but it just never quite gelled for me.