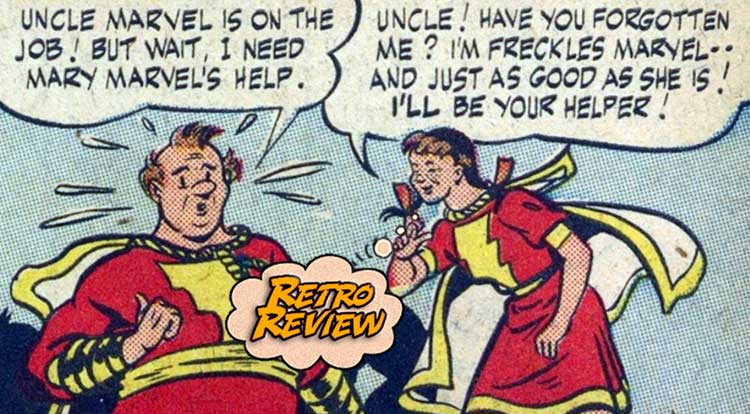 The Marvel Family is a sprawling affair, featuring two captains, four Billys, a tiger and a bunny.  Oh, and let’s not forget… Freckles?  Your Major Spoilers (Retro) Review of Wow Comics #35 awaits! Previously in Wow Comics: Initially the home of Fawcett Comics’ second-tier Batman-alike, Mister Scarlet, Wow Comics got a whole new star with issue #9, debuting Billy Batson’s twin sister Mary, aka Mary Marvel.  (They’re… not great with secret identities in the Batson family.)  Soon after, a mostly good-natured grifter named Dudley H. Dudley arrived on the scene, claiming to be Mary’s long-lost uncle and even swearing to have magical powers of his own that he would use but for a terrible case of “shazambago.”  Since he’s a relatively harmless old man and his fraudulent claims of super-powers aren’t hurting anyone, Dudley was allowed to stick around, becoming part of the Marvel Family and even openin ghis own small business! Of course, if reality television has taught me anything, it’s that where there’s one grifter, there’s likely to be others, and thus Dudley’s REAL niece Mary enters the picture with big dreams of superhero adventure.  Even better, she is clearly part of the Dudley line as, when her uncle tries to dissuade her from trying to join in on his new family,  li’l Freckles applies a little leverage (spelled ‘b-l-a-c-k-m-a-i-l’.) With her own lightning bolt-emblazoned battle shirt, Freckles is ready for action, joining her namesake and her uncle on his first official case: A man whose uncle’s Last Will and Testament is actually a scavenger hunt.  Uncle Marvel is able to follow the clues well enough to get close, only to fall prey to a masked ne’er-do-well who wants the inheritance for himself.  That’s where Freckles shows that, for all her social awkwardness and resemblance to Olive Oyl, she’s a brave young woman at heart. Mary’s power turns the tide, but Fricklesx’ clumsiness allows the gunman to get away.  Now officially part of the case, Mary Marvel even takes the time to help the faux-Marvels to fly to the next destination, where they meet the would-be thief again.  Freckles’ incompetence is even getting on Dudley’s nerves, but it’s quite amusing to see him lamenting that *her* lack of powers/experience are making a mockery of the Marvel name.  And then, she throws a hornet’s nest in his face. Sweet as she is, I can’t help but wonder if Mary is helping Freckles out to give Uncle Marvel a taste of his own Shazambago medicine, an assumption that is not dispelled by Jack Binder’s art.  (Jack is the elder brother of Otto, the creator of the Marvel Family and writer of this story, who did extensive comics work through the late thirties and into the forties, employing future stalwarts like Carmine Infantino, Kurt Shaffenberger and Gil Kane.)  With the last clue seeming like the whole scavenger hunt was a farce, things seem lost until Mary figures out that the clue means the fortune is hidden… right in the Cole home!

Unfortunately, that also leads the gunsel to the cash, as well. Mary’s question to the readers is answered with an unequivocal “Ehhhh?”, meaning that she made only a handful of additional appearances, with the last one in 1947.  She was important enough to make a cartoon appearance in the 1970s and to get namechecked in Dudley’s entry in ‘Who’s Who In The DC Universe’, but hasn’t shown the kind of goofy relevance of Mr. Tawky-Tawney or the Lieutenant Marvels.  Even so, Wow Comics #35 has a kind of charm in her debut story as well as entertaining-but-forgettable appearances by Phantom Eagle, Commando Yank and Mister Scarlet rounding out the book, and much more consistent art than a lot of Golden Age books ever got, earning 4 out of 5 stars overall.  Fawcett books tend to be higher quality affairs that many contemporary comics, but the cuteness of this issue’s lead feature gives it a real edge.

The lead story, in which Dudley H. Dudley has to deal with his own near-identical daughter, makes this one with the price of admission (though I wouldn't recommend buying Golden Age books in Near-Mint condition.)