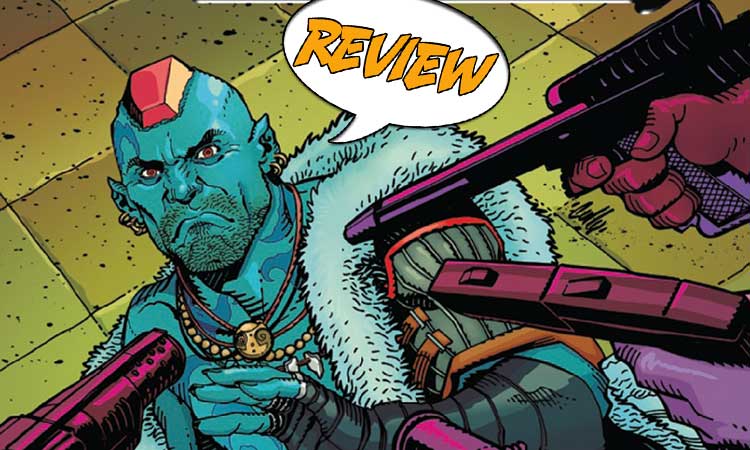 Yondu has immeasurable power in the palm of his hand.  But all he wants to do is make a quick buck and retire. Your Major Spoilers review of Yondu #2 from Marvel Comics, awaits! Previously in Yondu: The titular character has come into the possession of an incredibly powerful artifact, The Hearld’s Urn.  Yondu sees it as his ticket out of the rough and tumble life of being a spacefaring thief, all he has to do is sell it quick.  To complicate matters a relative from the far future has travelled back in time to ensure his forefather does right with the urn. Oh, and his name is also Yondu. To make matters even MORE complicated, a ruthless, android, assassin is on the trail of the urn, killing everyone in his way.

We find the ex-Ravager at the beginning of Yondu #1 crawling through the sewers of the planet Contraxia.  He’s there to see his ex-girlfriend Zhala, whom he believes will buy the urn off him without question. He sneaks and scams his way into Zhala’s club, only to find that she is not thrilled to see him.  The assassin who’s been chasing down the urn also arrives on Contraxia and soon sets out terrorizing the locals. The other Yondu, the one from the future, also makes his way to Contraxia, determined to stop his ancestor from making a mistake. Cut back to Yondu and Zhala, post-tryst.  Yondu shows her the urn and to his surprise, she wants absolutely nothing to do with it. She then tells him the story of the urn. The tale involves Galactus’ first herald, Thanos, Dwarves, and The Annihilation War. The important bit though is that every alien empire wants the urn. Zhala gives Yondu a suggestion as to who would actually buy the urn and he reluctantly leaves via Zhala’s window. At the same time, both the Yondu from the future and the assassin have arrived at Zhala’s club.  The two Yondu’s reunite and find themselves outside.  The assassin makes his way to Zhala and then kills her.  The assassin then attacks the two Yondus and in an act of desperation, the elder Yondu opens the urn.

There’s nothing inherently wrong with a redemption tale.  Which is what we seem to be seeing the beginning of here in Yondu #2.  All the elements are there: troubled main character, a naive conscience stand in, a simple task that spirals way out of control.  What’s missing here though, are strong characters to carry the story. Yondu isn’t very likeable enough to be an anti-hero like Deadpool or Venom and he isn’t bad enough to be a true heel like Lobo, he’s just somewhere in the middle as a jerk. Also, Yondu #2 commits one of the worst sins a comic can make these days, it “fridged” a character.  Killing Zhala doesn’t serve any real purpose other than to give Yondu a very small emotional stake in the events going on around him. In fact, the character of Zhala is a big blemish on this issue.  In the course of 24 pages Zhala is introduced, is presented as an angry and spiteful ex, sleeps with the main character, and is then brutally murdered in order to garner an emotional reaction from that main character.  It’s just unfortunate to see and really puts a damper on the rest of the book.

Yondu #2 is a baffling mixture of some really nice looking art, some not so nice art, and some ugly art. For example, there’s a panel featuring Galactus that is one of my favorite depictions of the character, but any other close up in the issue is a one way trip to “strangely contorted lips and eyebrows” town.  The whole issue is like this as well and lacks consistency.

Yondu #2 is a troubled book.  First and foremost, the way that the only prominent female character so far is treated is call for concern.  After that, there’s a weakly defined main character, and the way all the characters convene at the same place isn’t funny enough or action-y enough to be enjoyable, rather it comes off as weirdly convenient.  At the end of the day Yondu #2 doesn’t give enough reason or generate enough goodwill to make me want to check out #3. 2 out of 5 stars

Yondu #2 is a misstep in almost every way. It does nothing to make the unlikeable title character appealing. The way it treats its female character is troubling, and the art is hit or miss at best.