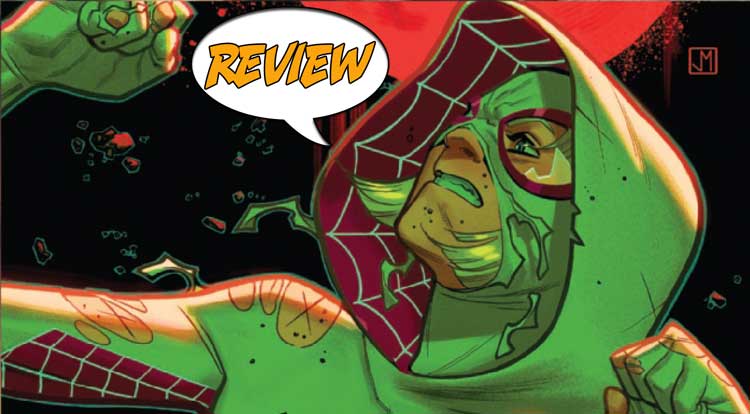 Previously in Ghost-Spider:  The Jackal has taken his dangerous obsession with Gwen Stacy across the breach between unverses…  Can she overcome her super-powered stalker?

We open with Gwen Stacy feeling a bit abandoned, as her friend Benji no-shows an appointment, leading her to worry.  (I’m pretty sure there’s reason to, though.)  When her other friend Kosei also leaves her in the lurch, Gwen starts to question the whole “make friends at school” plan, but there’s always crime-fighting!  Her return home is witnessed by the Earth-616 Miles “The Jackal” Warren, though, which leads to some problems even as she successfully defuses a hostage situation back home.  She even makes it to band practice early, and finds a near-miracle as Mary Jane keeps her cool when their ritual fight breaks out.  It’s a good day for Ghost-Spider.  The next day doesn’t go nearly as well, though, as her spider-sense suddenly goes off screaming that something is wrong and causing a major migraine.  Gwen returns to her home dimension, only for the Jackal 616 to follow her through the dimensional portal to Earth-65, with malicious intent…

THE INTERDIMENSIONAL COMMUTE IS FUN

Even with a clear understanding of multiple Earths and alternate dimensions, there are a few points in this issue where it is quite confusing to have two Miles Warrens in play.  One is working for Man-Wolf, who has big plans on Gwen’s native world, and the other spends the issue being a creepy stalker.  Visually, it’s a strong issue (especially Warren’s Jackal & Hyde routine, which is really cleverly staged) and I enjoy the dialogue.  In terms of story, it’s a transitional issue where Gwen is just going about her day-to-day routine, reminding me of the Lee/Romita Spider-Man comics it’s emulating, but there are a number of important bits of information revealed in these pages.  That’s also the book’s biggest weakness, though, as three or four back-burner plots are advanced all at once throughout the issue, with the only really big moment happening at the end with the Jackal transplant, making for an issue that feels meandery, if that’s a word.

All in all, Ghost-Spider #4 is a very old-school comic in all the best ways, examining Gwen Stacy’s day-to-day interdimensional life, advance two villainous plots and one “missing friend” subplot and even teaching Earth-65 Mary Jane a little patience, making for a better than average 3 out of 5 stars overall.  I like the art, I like the designs, I like the dialogue and I think it’ll work even better as part of a collected trade paperback story.

It's a day in the life of Spider-Gwen... I'm sorry, The Ghost-Spider, and feels like a very old-school take on superhero stories. I liked it!