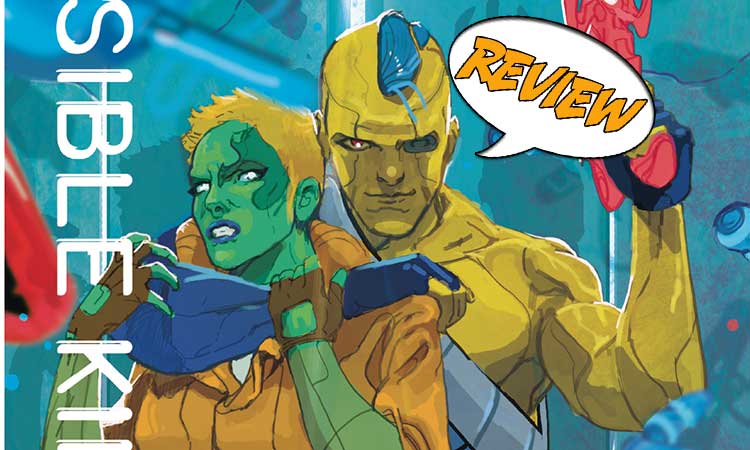 The Sundog is taken by Scavengers, who make Grix an offer to join them. Will she remain loyal to Lux even though they’re out to get her? Find out in Invisible Kingdom #7 from Dark Horse Comics. Previously in Invisible Kingdom:  Vess has joined the crew of the Sundog, a ship for the Lux Corporation captained by Grix. Vess and Grix have each stumbled upon a connection between Vess’ religious order and Lux, and now they are on the run, short on fuel and provisions. They make a stop at Vess’ home planet, a closed society on the fringes of the solar system. Vess talks to them and gets the fuel but finds herself rejected by her own people. On leaving, they travel through a zone of space junk where they are attacked by salvagers – and it seems that Vess and Grix are developing some kind of connection.

Invisible Kingdom #7 opens with Grix being held hostage by the Salvager captain Turo. Krov, who wasn’t with the others when this went down, stumbles upon them and when Turo demands the command codes, Krov gives them to him. Grix is angry, but Krov has a point. Their ship is a piece of crap – is it really worth their lives? We are reminded how the Lux Corporation skimps on maintenance and how they treat the crews.

This issue has some interesting conversations between Grix and Turo. He tries to talk her into joining them as a Salvager. He knows how Lux treats their people. He also is sharp enough to see that they seemed to be on the run, and depending on what this is, he may want to help her. I like that Turo is complicated, as we see when a Roolian supply ship comes close and the Salvagers bring it in and help themselves to its goods. Turo’s people have taken stuff, but they also repair the ship and give the Roolians fuel enough to get back home.

Vess confronts Turo – years of resentment coming to the fore. Grix intervenes and asks her to leave off for now and touches her shoulder. A little jolt of energy appears between them. Grix doesn’t know what this is, but it interests Turo, who asks her how much she knows about Roolian biology. Grix is not an education type of person. This is fascinating and it presages something more to learn about these two and the sort of bond that seems to be growing between them.

Turo continues his conversation with Grix. He knows full well how the inner planets exploit the resources of planets like Rool; how Lux makes “junk” and sells it back to the people whose resources were exploited. For the people who turn their backs on Lux, the Renunciation is there to pick them up. Still, Grix feels she can do better than be a Salvager.

Then, something unexpected – a heavily damaged Lux ship comes hurtling through the junk zone, desperate to get to Roolian orbit. They’re a tempting target for the Salvagers, but Turo is cautious. Lux has a reputation for their weapons capability. Their communications appear to be down too, most of them. But if they had someone who knew Lux communication codes… It’s a terrible decision, but Grix agrees to transmit to the Lux ship.

I really love the art of Invisible Kingdom #7. The people are all humanoid, but with a wide variety of skin color, facial and other skin patterns, and hair color. Different races also have different clothing styles which are instantly recognizable and which fit their personalities. I like that there’s a lot of variety, that Lux appears to be equally horrible to anyone who works for them.

The story wanders through the Scavenger ship, very much a working ship. I like the details of the various Scavengers and the areas throughout the ship, from where they work with sorting cargo to the bar area they go to relax. There are several outer space shots which are beautiful – this book has some of the finest coloring I’ve seen. I particularly like the scenes of the Lux ship spinning out of control and its interesting sound effects. If I have any criticism, it is that there is so much color that occasionally parts of people happen to match the background and they fade out a bit – fortunately and infrequent occurrence.

Invisible Kingdom #7 delivers another chapter that is rich in character development. The conflict is less physical here, but there is plenty of conflict nonetheless. I like how the story continues to grow, although it’s starting to feel like the focus is widening out too.

How much does law matter in a society controlled by a major corporation and a huge religion?