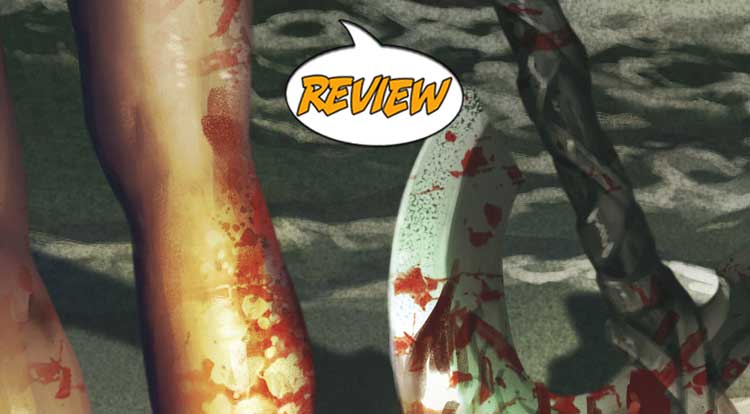 An intruder with a gun. A desperate woman with an axe… Your Major Spoilers review of Basketful of Heads #2 awaits! Previously in Basketful of Heads: Hunted to the point of exhaustion, June Branch struggles to outwit and outfight the home invader coming after her. He’s armed with a .44 and a secret agenda; she’s got a thousand year-old Viking relic and no way to escape.

The axe is about to fall…

When we read issue #1 on a recent episode of Dueling Review, Stephen and I both remarked that, while moody and intimidating, it never actually gave us any of the promised horror elements. This issue quickly makes up for that, with poor June hiding in her boyfriend’s house after last issue’ s home invasion. After hiding for hours, she creeps out only to find a scene of blood and breakage, with a severed finger lying on the carpet. It gets worse when one of the orange-jumpsuited criminals appears from the darkness and calmly explains what he intends to do with her and exactly whose severed digits she just encountered. As a terrible storm washes over Brody Island, taking out the power, she desperately grabs for the first weapon she can find, an ancient Viking axe and takes off running. When he gives chase, things take a turn for the horrific, in ways that I found both fascinating and horrifying (and that I’m not going to spoiler for you.) Worse still, a puzzling last-panel reveal makes it clear that there’s more than just escaped prisoners threatening June’s continued existence.

OKAY, *NOW* WE GOT THE HORROR AND THE SUPERNATURAL

This issue quickly moves from last issue’s in-depth setup to the trademark “and then SOMETHING BAD” that marks Joe Hill’s best work, and it’s immediately riveting. June’s fear and desperation turn quickly into something else, undermining the damsel-in-distress tropes quickly, and when the supernatural parts kick in, it’s genuinely chilling. At least part of that is Leomacs’ beautiful, naturalistic art, June feels like a real person, with a great range of expression, and the full-page moment where she finally takes advantage of carrying a battleaxe is AMAZING work, with the only complaints that I have about the issue being minor transitional questions during the sequence where the storm hits, and even that isn’t a deal-breaker. If you’re into the kind of horror that Joe Hill and his family are known for, this is definitely a comic worth checking out.

Growing up on reruns of ‘The Twilight Zone’ and the writing of Stephen King, Basketful of Heads #2 is entirely my jam, featuring some really impressive art, a tense, involving story and a couple of headscratching mysteries that make me want to come back for the next chapters. If you’re a fan of old-school Vertigo comics or the kind of stories that used to fill the pages of EC Comics’ ‘Tales From the Crypt’, you’ll likely find enjoyment in these (slightly bloody, adults-only) pages.

Dark, moody and disturbing, showing off the Hill's horror roots and featuring some excellent art.