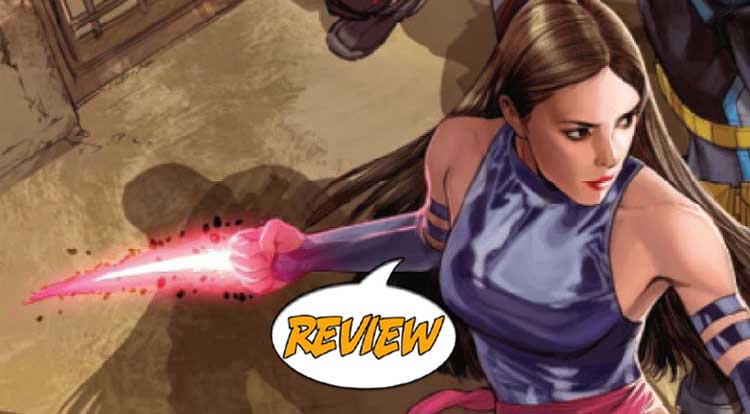 Psylocke’s back, but nothing is what it seems… Your Major Spoilers review of Fallen Angels #2 awaits! Previously in Fallen Angels: Psylocke finds herself in this new world of Mutantkind unsure of her place in it… but when a face from her past returns only to be killed, she seeks help from others who feel similar to get vengeance. Cable and X-23 join Kwannon for a personal mission that could jeopardize all Mutantkind!

NOT THE SAME PSYLOCKE WE’VE KNOWN

We open with a flashback of Kwannon (who, for those who didn’t realize, is the actual Asian woman that British mutant Betsy Braddock’s mind was stuck in back in ’91, now once again in her own form, while Betsy is the new Captain Britain) remembering her days with The Hand. Like most of her memories of those days, it involves cold-blooded murder. In the present, on Krakoa, Kwannon is having some issues fitting in, issues shared by Laura “X-23” Kinney, who worries that her berzerker side is about to break out. With the help of Cable, who is likewise having issues living in a mutant utopia, they track down a mysterious cartel called Overclock, they forge an uneasy alliance filled with dramatic exclamations and dark, brooding silences, setting out for Brazil, the group’s last known location. Once there, they discover a massive mechanical monster ready to destroy them all, and Psylocke announces that it’s officially time to trust their anger… and fight!

This book is very much classic 90s-style X-Men, which not only makes it feel very familiar, but makes for an odd fit with the new X-Men status quo. Kwannon/Psylocke makes it clear that, while the other mutants are overjoyed in their new home (which, by the way, makes me worry about them being brainwashed, especially Dazzler, who seems very much altered in this issue), she’s still an outcast. A meeting with Mister Sinister (whose dialogue is maddeningly vague and full of portent) and her flashbacks to being a murderer are designed to build that sense of alienation, but for me, it’s a case of trying TOO hard. Kudranski’s art is more successful, using shadows and close-ups to convey how out-of-place our trio of killers is, with a painted feel that emphasizes the grit and texture of reality. It’s quite good, but the navel-gazing nature of the story, combined with both Cable and X-23 feeling somewhat out-of-character (though, since they’ve been killed and resurrected, that may be a moot point) leaves me cold on the story.

In short, Fallen Angels #2 is a book that looks quite good but doesn’t really plow any new ground, with overwritten and overwrought dialogue that works against the story and feels like a misfit in the new X-Men world, earning a disappointing 2.5 out of 5 stars overall. I won’t say that X-fans won’t enjoy it, especially if you’re heavily into the “hated and feared by a world that doesn’t know their deadly, true self” aspect of things, but it’s very much not a book that I’ll be revisiting during this particular arc.

I’m not a fan of the dialogue and the melodrama is pretty thick, but a solid art job does some of the heavy lifting here. I’m also quite not sure how this fits in with the current X-regime.