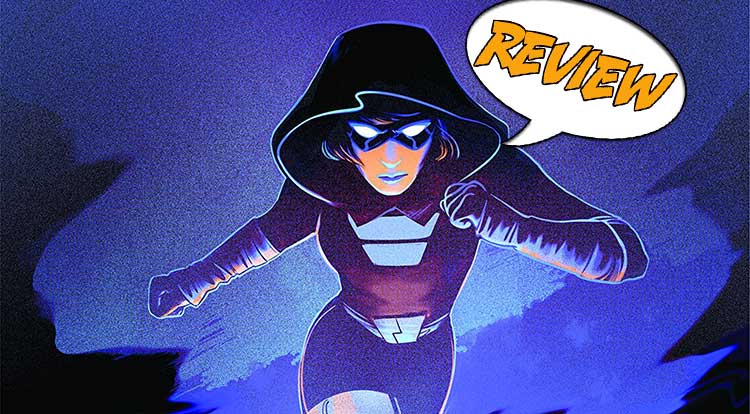 Still trying to get a handle on life after being fired and witnessing the death of The Black Ghost, Lara continues her investigation of the crime lord Barnabus. Will her poor life choices doom her before she can uncover her true purpose? From New Wave Comics and Comixology Originals comes THE BLACK GHOST #3. Previously in THE BLACK GHOST: Lara Dominguez is a reporter for the Creighton Courier. In between teaching GED night school, working on her assigned stories, and drinking entirely to much, she also researches and studies the city of Creighton’s own masked vigilante, The Black Ghost. While working a lead on the crime lord Barnabus, given to her by her anonymous cyber contact, Lone, she witnesses The Black Ghost as he is gunned down, killed by a hidden sniper. After escaping Barnabus’s men, she hits her local dive and drowns her pain and disappointment in alcohol.  Returning home, she discovers the mask of the Black Ghost pinned to her apartment door and a file full of photos from her fight with Barnabus’s thugs, courtesy of Lone. She also finds she has been fired from her reporting job due to her alcoholic tendencies and completely missed reporting on The Black Ghost’s death. When she returns home she finds a box with the costume of the Black Ghost in it, and a note that says, “Become the story.” She throws the costume in a garbage can and decides it is time to figure out who she really is. Oh, wait, is that a bar?

SHE HUNTS THE BIGGEST OF ALL GAME!

Waking up in the morning and not remember anything from the night before would be reason enough to call a doctor for most people, but for Lara Dominguez it just means she everything is status quo. After another drunken night, she awakes to find the box with her previous job’s desk contents, and a barrage of calls and text messages from her ex-boss, and message from her old flame, Kelly Himes. Kelly was part of her life when she lived in Miami, and after her brother was murdered and her relationship with her went sour after Lara could not handle the situation she found herself in. Now it looks like Kelly is in town, and wants to meet up. An ex-love checking on an old flame, or something else? Meeting with her later in the day, Kelly tells her that she had heard about her being fried and wanted Lara to come work for the Centurion and write about the city. Instead of considering it, she begins to ask Kelly questions about why The Centurion is pouring so much money and effort into a city most consider done for. Kelly tells her she really just wanted to see her, but now knows nothing has changed. Lara leaves with a promise to reconnect later.

While adjusting to her new life post-employment, she finds the costume of the Black Ghost has made its way back into her apartment after she had thrown it in the trash. Before she can think about the implications of that, her GED student Ernesto shows up and offers her his assistance as she is now the new Black Ghost, only she totally is not. After getting rid of Ernesto, she discovers though Lone the Centurion has no job openings and decides to follow Kelly and find out how she fits into the corruption Lara has been investigating. It leads her, expectantly, to Barnabus. Following Barnabus, she watches as he makes the rounds gathering his protection money with his gang. All of the business owners give in and pay, until one does not. It looks bad for the citizen, and Lara finds herself compelled to do something. She reaches into her bag, draws forth the mask of The Black Ghost, and prepares to take a step that will change everything. Will it be for the better or worse.?

WHO KNOWS WHAT EVIL LURKS…!

It is obvious that this title owes much to the pulp heroes of old. Alex Segura (The Archies, Archie Meets the B-52s) and Monica Gallagher (Assassin Roommate, Bonnie N. Collide) take that influence and display it in the form of reporter Lara Dominquez. The story unfolding, and this issue in particular, is much more Lara’s story than that of the titular character. While we continue this focus on Lara, we get the hint of another character coming into view, however faintly. The city of Creighton itself has been described as a dead town, with there being an effort by money people to revitalize it. While we continue to experience the issues which Laura has, it becomes clear that she is sharing this journey with the city. She has been describes as hopeless, as has the city. She has had people try to help her, in spite of herself, as has the city. While The Black Ghost served to help the city of Creighton with his life, he is serving to revitalize Lara with his death. Lone is pushing her to that step to take on the mask of a hero, and her ex-flame Kelly, currently working with people to help the city, is trying, in a strange way, to help an old friend. Or is she? It’s a great character study with multiple levels and reads wonderfully.

The artwork by George Cambadais (The Double Life of Miranda Turner, Grave Lillies) is deceptively simple. It has an almost animation style which allows for smooth, flowing lines that draw you in. He also incorporates some great panel structure. Your eyes follow the story visually, and is guided to the right scenes intuitively.

The duality of Lara and the city of Creighton is something that sneaks up on you. I know it did me. What could have been a standard story of a responsible woman taking on greater responsibility for the good of her fellow citizens becomes something deeper. Watching Lara make these life choices will have you practically scream at the top of your lungs! Segura and Gallagher have thrown the standard trope of “With Great Power” out the window and formed it into a study of a woman drowning. Like most tragedies, you find it hard to look away. You pray she will get that lifeline.

THE BLACK GHOST #3 will challenge your ideas about worthiness and the heroic origin story. This is a definite add to your reading list.

Action packed with a deep meaning, THE BLACK GHOST #3 is different than you may have expected, but more than you could ask for.