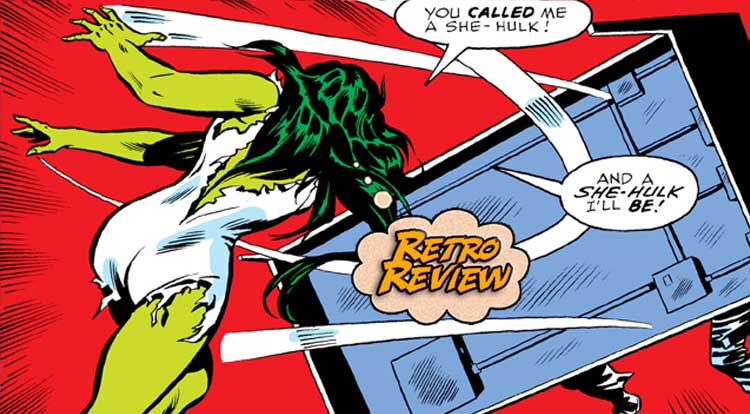 She is the last major character created by Stan Lee and an important member of The Avengers…  but do you know her story?  Your Major Spoilers (Retro) Review of The Savage She-Hulk #1 awaits! Previously in The Savage She-Hulk:  The legend of She-Hulk begins with a very modern problem: Creative rights.  With the success of the Incredible Hulk on CBS TV, Stan Lee was concerned that someone would create a female knockoff or that CBS might write a female counterpart into the series, thus diluting Marvel’s trademark.  (It was a valid concern, given a previous similar situation with a cartoon character originally called “Spider-Woman”, leading Marvel to create their own and Filmation to redub their character as Web Woman.)  In order to make sure that Marvel maintained the rights to any theoretical She-Hulks, he decided to create one of his own.  We being with a tired young man in purple pants (the narrative amusingly reading “Call him David, or Bruce, or Bob…  What does it matter?”) seeking out his favorite cousin in the hope of finding a confidante upon whom to unload some of his woes. Little Jen is now a big-time lawyer in Los Angeles, and even Robert Bruce Banner is impressed.  He tells his tale of woe (Gamma Bomb, kid on the range, rampaging monster blah blah blah fishcakes) and Jen offers to let him crash at her place.  Unfortunately for both Doctor Banner and Ms. Walters, Jen is in the middle of a big case, defending a man who wronged a mobster named Trask… who has sent his goons to remove her as an obstacle. The art in this issue is… unusual.  You can clearly see the influences of John Buscema’s layouts, but it’s very much a Chic Stone joint, especially when it comes to Jennifer’s styling 1963 hairdo.  I’m also trying to figure out exactly what model of care she’s driving.  Of course, it’s not for long, as the thugs sent to shoot jennifer leap out to finish the job, only to fall prety to Bruce Banner’s experience in getting out of awkward situations.  (This time involves a garden hose.)  Though his degree is in physics and not an M.D., he still has enough wherewithal to try and save his wounded cousin’s life. Bruce gets Jennifer stabilized and sent to the hospital, escaping from police custody in his own inimitable style (there’s a big ol’ hole in the stonework now) and once again goes on the run, worried that his need for connection has doomed his only living family.  Unfortunately, Trask’s murderous goons track down the young attorney in her hotel room and try to kill her with a chloroform rag, unaware that she is now infused with gamma-irradiated blood cells.

The results are predictable, assuming you read enough comic books. Seven feet tall, bulletproof and possessed of a truly amazing eyebrow game, the newly minted She-Hulk makes short work of her would-be killers, chasing them out of the hospital and even ending their high-speed exit with ease. As her anger fades, so does her enhanced powers, leaving Jen to sneak back into her room, thus keeping the secret of her second identity secret.  But as she sits and rests, she realizes that the battle against criminals like Trask isn’t over, may never BE over, and so she vows to handle it with the help of her new powers.  “Whatever Jennifer Walters can’t handle, the She-Hulk will do!”  She even worries about her once-again-long-lost cousin, ending things on a trademark Stan Lee tragic note.  The Savage She-Hulk #1 is a solid done-in-one that gets a lot of narrative heavy-lifting out of the way quicky, establishing the basics of the character, The Hulk’ origins, Jen’s own origin and first battle in just a few pages, reminding us of how good Stan and his collaborators could be at setting up a premise, with art that is clear and interesting, but not quite up to classic Marvel standards, earning 3.5 out of 5 stars overall.  This is Stan’s only issue of the book, with number two debuting the regular creative team of David Anthony Kraft and Mike Vosberg, which makes this the equivalent of the “pilot episode is remarkably different from the series at large” syndrome that we’ve see so often on television, but it works well enough that I hope that the upcoming Disney+ She-Hulk series doesn’t stray too far.

jennifer Walter's first appearance is a showcase of how to stage an origin, making Stan The Man's last big Marvel debut a memorable one. I'm a little startled to realize that next year will be her fortieth anniversary!