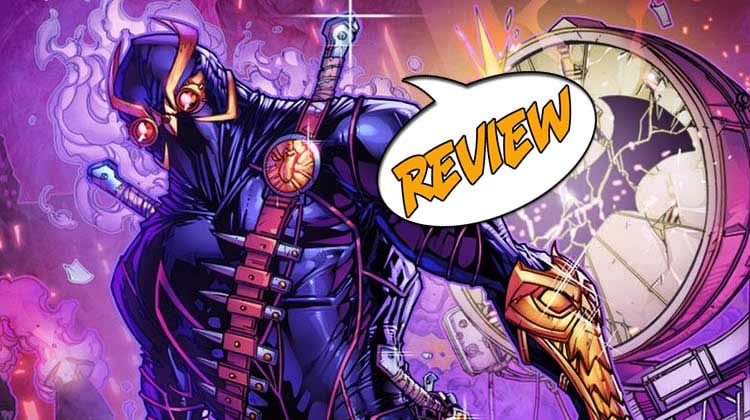 Poor Dick Grayson has REALLY been hit hard recently, what with a bullet hitting his brain and basically removing many of his memories. He’s moved out of Gotham City to Bludhaven, and he’s Ric now, someone who never seems to be able to avoid his true past. SOLICITATION: William Cobb has taken the Nightwings down one by one, leaving Ric on his own in a Blüdhaven that is literally aflame. Cobb offers Ric a chance to save his city by at last fulfilling his legacy as the Gray Son and becoming the new Talon and leading the Court of Owls into a new age.

IS HE ROBIN, NIGHTWING, OR IS HE TALON?

When the Court of Owls saga began a few years back, it was clearly outlined that Dick was originally supposed to be a Talon, something like an enforcer for that mysterious group. However, when Bruce Wayne intervened after Dick’s parents were killed, that changed the course of his life.

Now, we find out that everything that has happened since issue #50 has been the work of William Cobb, Dick’s great-grandfather and a major Talon.

I find that to be a very logical explanation behind all the strange goings-on in Ric/Dick’s life. In this book. Cobb uses technology that replaces Dick’s lost memories with manufactured ones that turns the former Robin into the Talon the Court originally intended him to be.

Of course, with no memories of ever being Robin or Nightwing, Ric/Dick is apparently brainwashed into serving the Court since he’s always done that, he thinks.

Cobb has taken out the rest of the Nightwings group, and as they come together near the end of the issue, the Talon is after them, ordered to kill them all.

One of the great storytelling devices Jurgens uses is Beatrice, who is watching all this story unfold. She provides someone for Cobb to talk with as Ric/Dick stands paralyzed, quietly being reworked mentally. She’s our perspective, saying that this won’t work, that Ric/Dick will overcome all this. Let’s hope she’s right!

I’m completely convinced that this was NOT what DC intended when Nightwing took a bullet to the brain. I could be wrong, but I have more faith in Mr. Jurgens’s ability to figure out gripping plotlines than I do in other parts of DC. Nothing against them, of course!

It also might mean that this storyline will come to an end soon. I’ve been reading comics long enough, and the Batman family in particular, to know that Nightwing likely will yet again return to the pages of a DC comic. We’ll see.

A DARK AND DESPERATE FEEL

I like the art in this comic, which reflects the dark and desperate mood of the story. The art is also a little sketchy, again something that works with this issue’s tale.

I found the action sequences compelling, with danger all around everyone! Also, the facial expressions of the various characters did a great job of telling us what each person is thinking or feeling—except Ric/Dick, who is expressionless during most of this issue. The contrast between him and the others was really gripping!

BOTTOM LINE: A STORYLINE YEARS IN THE MAKING!

I do want to point out that it was actually tough to pick this out as a Nightwing title! The name was in teensy type in the upper left corner, under the DC Comics logo. I realize it is part of the Year of the Villain event, but I wasn’t sure what I was buying until I saw that word there!

Again, though, I have to congratulate Jurgens for taking what seemed to be a totally random event and making it make sense! I also have thought that the Court of Owls still has so much potential as far as stories go that it was great to see them back and up to the highest levels of deviltry! Well done!

Look, I’m certain that Nightwing will be back and back soon. After all, the book is still called Nightwing, right? If they change the name to Talon, then yeah, I will start to worry!

I have to congratulate Jurgens for taking what seemed to be a totally random event and making it make sense! I also have thought that the Court of Owls still has so much potential as far as stories go that it was great to see them back and up to the highest levels of deviltry!