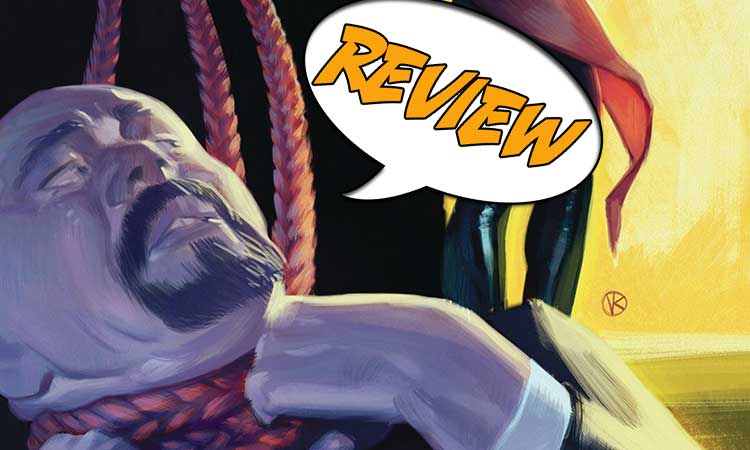 Roku has succeeded in obtaining the weapon she was hired to steal, but the fact that it is a young girl is something of a surprise. Will she be able to complete her mission or will shadows from the past take her down? ROKU #2 is on store shelves now from Valiant Entertainment! Previously in ROKU:  After Roku, a high talent, mind-reading, mercenary for hire with hair that is on the literal cutting edge, is hired to take out embers of The Jade Union, her contact is impressed enough to offer her another job. To obtain a state-of-the-art weapon before it is available on the open market during an exclusive auction, she will get three times her normal fees. She quickly finds herself in Moscow working alongside of her contact on the ground, a young woman called Elena. Using her telepathic abilities and her telekinetically prehensile hair, she quickly makes her way to the target only to discover she is not alone. A stealth operative is following her and seems to know some things about her Roku does not. After a short fight and setting the guards on her adversary, Roku arrives at the location of the weapon, and finds a young girl, a girl who also seems to know more about Roku than she should.

SECRETS WHISPERED IN THE DARK!

Having escaped with the young girl/weapon, Roku has retreated to her accommodations at the Russian hotel which Elena had provided her before the mission began. Taking Elena into her confidence, they began to question why the girl knows so much, knows anything, about Roku and her past. Even as they give voice to the query, the young girl begins to speak, divulging Roku’s origins. Her original name was Angelina Alcott, but she died, murdered by a group known as The Shadow Seven. That same group brought her back to life, wiped her memory, and gave her the powers she uses in her current line of work. The young girl even tells her of her invisible adversary, believed to be a British agent named Ember-1. They worked together when Angelina was attached to MI-6, but that was before her death. As she continues to relay the history of the freelancer now known as Roku, Elena tells her she believes the girl has been altered. It seems that she can access information from some source, but is unsure if it is the internet, the dark web, or just in the electronic ether which surrounds them. Once she has begun, Elena is not sure the girl can stop. The idea of a person being able to access any secret, from anywhere, is daunting. Suddenly the girl tells them a group of mercenaries has arrived to bring her in.

While Roku contends with the dark clad, ancient ninja weapon-wielding mercenaries, Elena discovers that the girl can even pull in information about her. The tide soon turns, and it looks like they may be able to escape, until a final combatant appears. A thin man clad in geometric tattoos or scarring, with knives strapped to his body. The girl tells Roku he is known as the Minister of Blades, and like her, he has been altered. Roku must battle this new threat, protect Elena and the girl, and escape with her life. Will she be able to, or will this be a really short series?

You know, sometimes you pick up a title because of the creative team, other times you chose it because of the concept, other times you just grab it up because it has a cool cover. I hit this one up because of the cover, then I saw who the writer was, Cullen Bunn (The Sixth Gun, Harrow County). For some reason, I seem to end up reviewing Bunn’s work quite often and I think part of the reasons is his excellent ability to write a compelling story and make it stand out from the rest of the spinner rack. ROKU #2 is no exception. There is all of the Bunn trademarks, his pacing, his dialogue, and it works overall and is enjoyable. Still, something rubbed me a little wrong, and I think it may be the fact of one character being the ultimate info dump device. Don’t misunderstand me, it is much better to read a summation of a character in the form of another character and having it work directly into the overall plot, but it is still an info dump. Cullen Bunn, however, disguises it in such a way that you are drawn in and accept it as part of the story.

The artwork by Ramon F. Bachs (Detective Comics, Azrael) is enjoyable as well. The line work has a slight sketchy feel to it, just a little rough, and it makes the character seems a little rough as well. In particular, his sue of the visual effect of Roku controlling her hair as a weapon looks great. When in combat against the Minster of Blades, it flows wonderfully. It is important to consider if the artist and writer complement each other’s work. In this case, they do.  They establish a solid foundation on which to expand this world, and it looks like it is going to be a fun ride.

The concept behind this title is interesting and takes on aspects of some great espionage titles as well as science fiction. Bunn brings us into a world of dark plans and darker secrets, and through a handy device is able to impart nearly all the information we need to enjoy the tale. There are aspects of great spy movies such as Jason Bourne, but mixed in with a good deal of science fiction and comic book staples.

ROKU #2 delves deeper into the past of the freelance mercenary known as Roku, and sets up the conflict for future issues very nicely. See if you can spy a copy at your local comic shop.