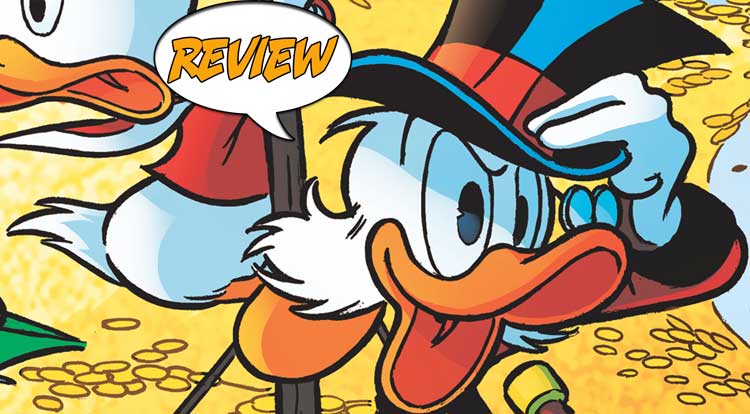 The Beagle Boys are on the rampage and only Scrooge has the resources (and the allies) to stop them!  Your Major Spoilers review of Uncle Scrooge #50 awaits! Previously in Uncle Scrooge:  With the Beagle Boys and Magica De Spell causing no end of headaches for Uncle Scrooge and his friends and family, will the bad guys finally win… or will a little help come from some unexpected sources to turn the tide?

UNDER SIEGE BY THE BEAGLE BOYS!

With Scrooge’s money bin stolen and taken to Duckburg Stadium where a coterie of criminals is prepared to bust is open, Donald Duck, Gyro Gearloose and Fethry Duck race to save the day, while Scrooge tries to fend of Magica DeSpell’s evil influences.  The Bin’s robotic mode is of some help, but as it quickly runs the batteries dry, it’s up to Gyro to find the secret battery: a piggy bank powered by coins.  HIs $1.16 won’t do the trick, but he manages to tap into the city’s communication grid to offer the citizens of Duckburg a solution.  (Hint: It’s crowdfunding!)  The people aren’t interested, though, until John D. Rockerduck, Scrooge’s old frenemy, takes over and makes a stronger argument for civic responsibility and using their own resources and determination to stop the criminals who would take nearly all the money in their entire city.  It’s… a mixed metaphor, but one that works.  Somewhat, anyway, as the Money Bin gets an infusion of power, but manages to get launched into space by Magica’s greed for the Number One Dime.  Of course, it’s not nearly as powerful as The Base Coin, the first dollar that Scrooge ever earned…  which falls into Magica’s sorta-wicked hands!

BOOKS DON’T SEEM TO GET TO #50 ANYMORE

It’s remarkable how well this story works as a big anniversary, giving a spotlight to (and reinforcing the world-views of) most everyone in Duckburg, ending with The Beagle Boys back in jail, Scrooge’s bin back on the hill and even Fethry getting his moment in the sun.  I really like the backup story, as well, showing us Scrooge’s faithful manservant Quackmore who, frankly, should be more upset that he’s working for a miserly, mean old man, but somehow… isn’t?  This issue is even more impressive given that it was #3227 in it’s original Italian presentation, meaning that this sort of epic storytelling is just another day in comics that aren’t limited by short-sightedness and the hidebound U.S. market.  The art is likewise impressive, staying on the all-important Disney models but showing SO MUCH expression and emotion.  It’s a difficult proposition for any story, but this one features characters who mostly have bills, making it even more impressive.  It’s hard to tell stories like this in the long shadow of Carl Barks, but Stabile, Zemelo, Franzo, Gianatti and Picone (and Erin Brady) pull it off and make it seem effortless.

I will say that there’s a problematic element to this issue’s story (the regular citizens being expected to help bail out the millionaire with their own collective funds), but it’s one that you can easily overlook in the context of an Uncle Scrooge tale, where the ethical implications of billionaires are somewhat less fraught.  Uncle Scrooge #50 makes great use of the storytelling tools of Duckburg and Scrooge’s cast, developing into a tale worthy of a fiftieth-anniversary celebration, with art that never stopped being attractive, creative and incredibly expressive, earning a dead-solid 4.5 out of 5 stars overall.  If you’ve never read Uncle Scrooge, this issue would be a good way to see what you’ve been missing out on, and it’s kind of fun to see a number fifty in the modern “18 issues and cancellation” comic industry.

Uncle Scrooge is one of the most revered icons of comic books around the world, and this issue is an excellent celebration of that, with even Fethry Duck bringing his A-Game. It's pretty wonderful.