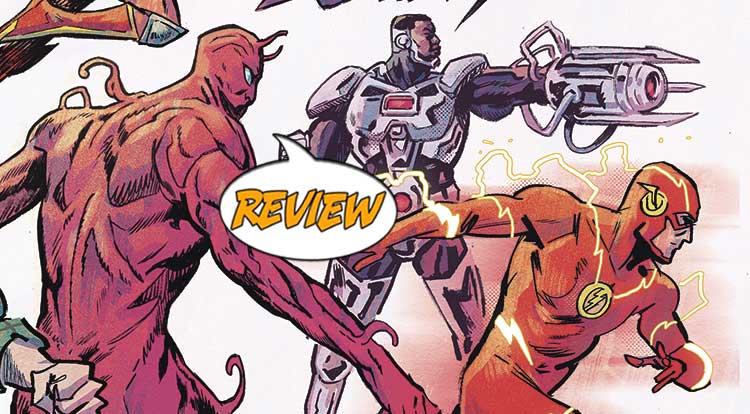 The architect of the universe-switch is revealed!  But will the Black Hammer crew WANT to go home?  Your Major Spoilers review of Black Hammer/Justice League: Hammer of Justice #5 awaits! Previously in Black Hammer/Justice League: Hammer of Justice:  Colonel Weird and the Green Lantern must convince the Black Hammer crew to go back to their own dimension to save the multiverse-which means giving up more than some may be willing to give.

EVERYONE HAS TO AGREE

While Superman, Batman, Wonder Woman and Cyborg fight what seems like an endless stream of arcane monsters on the Black Hammer Farm, Mxyzptlk offers a deal: If every single person displaced agrees that they’re willing to go back to where they were, he’ll reverse the magics that created this mess in the first place.  Unfortunately, Golden Gail has finally gotten her human form back after literally decades, and could not give a damn about the plight of a couple of heroes she’s never even met.  Abraham Slam and Barbalien remind her that this isn’t their world anyway, and that she’d be just as out of place in Metropolis as she was trapped on the farm, leading her to make the only decision she can: “No mater what we’ve been through, no matter how much we’ve changed…  We’re still heroes.  And heroes always do the right thing.”  With that, the spell is reversed, and the Black Hammer family returns to their farm with The Flash in tow, leading to a lovely series of moments as Barry reunites with his teammates who thought he was dead.  Before returning home, there’s even a chance for a meal and some camraderie before Colonel Weird realizes that something strange is happening in the Para-Zone.

TOLDJA IT WAS MXYZPTLK! `

The final page is pretty chilling in a way that Mzy stories haven’t been since ‘Whatever Happened To The Man Of Tomorrow’ back in ’86, and makes me wonder if there’s more of this team-up stuff in the works.  The joy of this issue is in seeing Abe and Clark Kent bonding over how well the North 40 has grown, Batman and Madame Dragonfly sniping at each other and the sight of the League in action alongside these heroes that they’ve (at least partially inspired.)  Lemire’s script is full of lovely dialoge, from Madame D’s insistence that, by tomorrow, this’ll be “just another imaginary story” to Cyborg and Flash’s heartfelt words for one another, but perhaps my favorite part is Golden Gail railing at Mxyzptlk that he doesn’t know her, he doesn’t know about heroes and how she’s ready to rip off his arms and shove them up his…   Aaaanywaay, there’s also a great running gag about crushes on Aquaman (including Barbalien’s) that serves to really underline how similar these teams are when push comes to shove.  I’d love to see this team on a regular Justice League mini or ongoing.

In short, Black Hammer/Justice League: Hammer of Justice #5 wraps it all up with aplomb and style, delivering on the promise of interdimensional fighty-fighty, hard decisions and the hints about our favorite Fifth Dimensional imp (though I think Mxy dispersing The Spectre with a finger snap felt a bit off), earning a very impressive 4.5 out of 5 stars overall.  I worried about whether or not you could make a book work, given that the JLA is a large part of what ‘Black Hammer’ is parodying, but Lemire, Walsh and company not only make this book work, they make it look easy.  If you’ve missed the individual issues, I’d say you need to grab yourself a copy of the inevitable collection.  It’s worth the time, and will probably read even better once collected.

If you haven't been following this book, you've missed a really good story that seems to have ramifications as yet unseen... It's a good book, y'all!