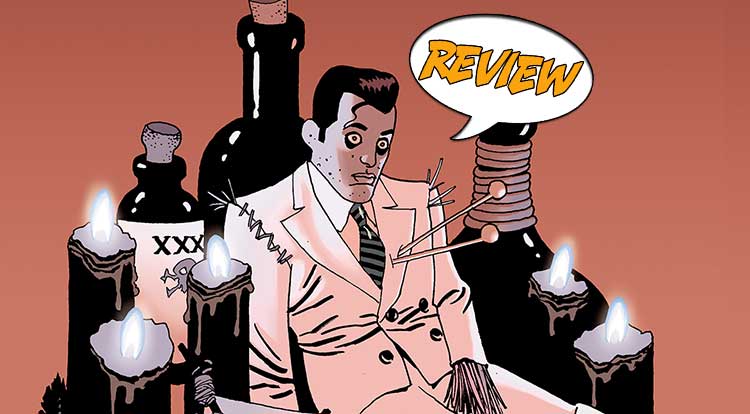 Cursed by the bite of a werewolf, gangster Lou Pirlo is anxious to find a cure.  Fortunately, his girlfriend, Delia, is a certified witch – as are her sisters.  But everything has a price, so Lou does what he does best – earning cash any which way.  Can Lou rustle up the dough without getting into more trouble?  Find out in our Major Spoilers review of Moonshine #13 from Image Comics. Previously in Moonshine: Werewolf and gangster (now there’s a winning combination!) Lou Pirlo and his girlfriend Delia make a run for New Orleans, to escape the mafia dons of New York.  But Lou bit off more than he could chew in the form of a hunter looking for the greatest prize of his career – Lou!  In a blood drenched finale, Lou and Delia escape, and find themselves back with Delia’s sisters – who are none too pleased to see either of them.

WIRE IN THE BLOOD

Moonshine #13 kicks off a new story for gangster Lou Pirlo.  After the misadventures of the previous story arc, Lou is seeking a cure for the lycanthropic infection that surges through his blood.  Already, as we see evocatively portrayed in the opening pages of this issue, the infection has spread to his dreams.  While his girlfriend Delia’s sisters do have a cure for Lou, their witchcraft comes at a steep price.  We see, then, what Lou is willing to do to earn the money to have his curse lifted from him.

Moonshine #13 is a beautiful issue to look at.  Not only is Eduardo Rossi’s artwork simply superb, but it is complemented by Jared Fletcher’s lettering, which manages to convey the different emotions of characters and scenes.  There’s a lushness to Rossi’s art.  It brings a sense of the casual violence lurking under the surface, and also the inherent lust that lies in the werewolf tale – a man who cannot resist the tide of blood and must transform by the light of the moon invokes blood and sex in equal measure.  Couple this with Brian Azzarello’s writing, where all the characters are given time and space to shine, and you have an exceptionally strong comic.

I was listening to a podcast today where the hosts discussed why the majority of werewolf movies didn’t work – they landed on the werewolf character being both protagonist and antagonist.  Fortunately, Moonshine #13 doesn’t have that problem, as first, the situation Lou finds himself in is antagonist enough, and later in the issue, we see the appearance of voodoo king Jean-Baptiste to step on stage as the villain.  The shape of this arc is then complete, and is handled very deftly.

Lou’s situation is cleverly highlighted early in the issue.  Infected by the bite of a werewolf, and thus becoming a sort of alpha male, he is surrounded by Delia and her sisters in the first half of the issue.  The masculine/feminine dichotomy here is stark, as is the ever present threat of the havoc Lou could wreak if the circumstances were right.  Another highlight of Moonshine #13 is how well the writing and the artwork evoke the Prohibition era of the 1920s, from the slang to the visual depiction of that era.

I found the second half of the issue to be more entertaining that the first section of Moonshine #13.  Lou has to earn to be able to pay for the curse of the werewolf to be lifted, so what is a gangster to do than find the sleaziest parts of town filled with the sort of people he can swindle out of their money.  So we dive deep into the open air brothels and speakeasies that litter the city, and we get to see Lou winning at dice and cards in such a manner that he invites the sort of attention and praise he would’ve been wise to avoid.  But it was ever thus.

Moonshine #13 begins a new story arc for out gangster hero.  Brian Azzarello is a past master writing crime fiction, and it shines in this issue, with the crime-ridden era of America in the 1920s effortless displayed in word and deed.  Rossi’s artwork and especially the sepia and brown tones of his coloring take the reader back to a lost era that undoubtedly is better to read about than visit, but is still compelling.

A strong opening issue to a new storyline that promises chills and thrills as crime, criminals and voodoo come together in a compelling mash up that launches our shady hero into yet another adventure!