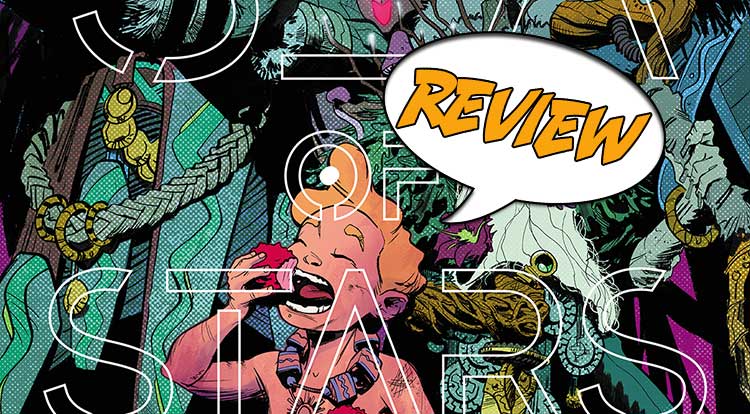 Gil has crashed on the Zzaztek moon, while Kadyn is brought there as a god. What does fate have in store for them now? Find out in Sea of Stars #5 from Image Comics. Previously in Sea of Stars: Young Kadyn has acquired godlike powers. An outcast of a race called the Zzaztek (Dalla the Despised) has found him and calls him Quasarro, the name of the Zzaztek god. She mentions a sunwood war club, and when Kadyn says its name, it appears from across space and tears into his chest. Kadyn remembers seeing the club before, on his dad’s ship. It was the last thing he touched before everything happened. Kadyn’s father, Gil, has found his way to the Zzaztek home planet where he is being hunted. His only companion is Kyle, the drone, who sort of makes a truce with him, realizing that his own survival is better if Gil survives too. Then Kadyn’s signal light blinks off and Gil loses what little hope he had.

ALL ROADS LEAD TO THE ZZAZTEK MOON

I like the writing at the opening of Sea of Stars #5. Gil is tied up and is being dragged away by a couple Zzaztek warriors. He isn’t saying a thing; they don’t understand the Zzaztek. Instead Kyle the drone is the only speaker, wondering why Gil has changed and wondering how he got Kyle to help him and care about him only to give up now. I read him as having a rather flat tone, and it adds character to his speech.

We know Kadyn is closer to him than he could ever expect. The child has landed on the Zzaztek moon and Dalla takes him to the Star Shaman. They’re on their way to somewhere ceremonial and all along their route, people are bowing. The Zzazteks believe they are the true people of the stars, and this is their holiest city. The two space scavengers, still tagging along, are concerned and skeptical.

As well they may be as the shaman leads Kadyn up the steps to the top of a sort of pyramid. The Shaman calls it a place of honor. Kadyn talks about how he’d rather go swimming in space than climb a bunch of stairs. Dalla urges Kadyn to go along. He trusts her, but even so, we can see something in her eyes that makes us suspect something more. When the space-whale and his companion get tied up and led away, you can kind of see what’s coming.

The sunwood war club is inside Kadyn, and the Star Shaman sees only one way of getting it back. He doesn’t want the power of their god residing in the body of another race, and an earthling at that. And he has a handy sacrificial knife.

Across town, an unresisting Gil is dragged off to the dungeons. He crosses paths with the space-monkey and space-whale, and the monkey drops the helmet he’s been carrying. Gil thinks he recognizes it and grabs it. Kyle does a scan and they realize it is Kadyn’s helmet. The space-monkey gets away from his captors and runs up to Gil. They do not speak a common language. The monkey is distressed, but beneath this, Gil sees a thread of something else, as though the monkey somehow recognizes him.

Sure enough, the Shaman intends to sacrifice Kadyn. Dalla has a change of heart and stands up to prevent him from doing so. Kadyn gets tired of waiting for the ceremony and engages his mystical powers, right about the time his father and the scavengers are running up the pyramid. The Shaman strikes out at Kadyn, and suddenly something else gets pulled into the mix.

COVERING A LOT OF GROUND

There is a lot going on and a lot to see in Sea of Stars #5. There are times when the art looks a little hurried and some of the details are streamlined. It’s a little hard to get your bearings on the Zzaztek moon, complicated by the fact that it has apparently been broken into floating islands. There are some interesting long shots and panoramas of the moon which do make it seem alien and somewhat different.

In the art, Kadyn really stands out as a little white human boy among all the aliens. And there’s actually something kind of uncomfortable about this for me, especially since Kadyn literally turns out to embody their god. This is just too close to the trope of “tribal people thinking the white man is their god.” It is mitigated somewhat by the fact that he is a child who clearly doesn’t understand what’s going on, but still.

Through all sorts of tribulations, Gil and Kadyn are almost together again in Sea of Stars #5. The story feels a little more coherent, probably because all the loose threads have come together. I’m not quite sure how much character growth there’s been for either Gil or Kadyn. I do like that it has a bit of a twist at the end though.

After trials and tribulations, Gil and Kadyn are about to cross paths, unless the Zzaztek have other plans…