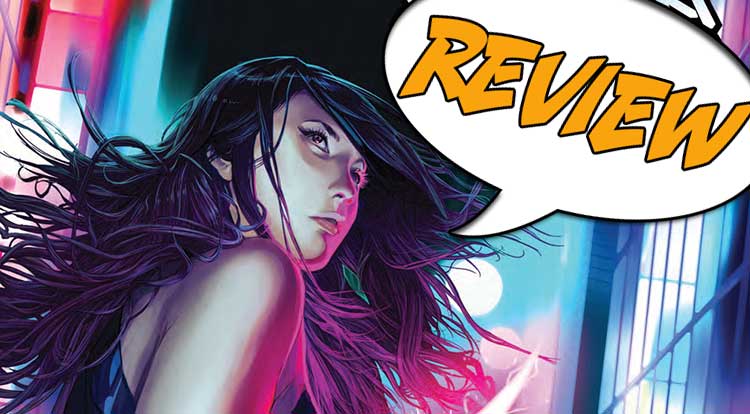 While most of mutant kind has come to Krakoa to finally enjoy peace, for some of the residents that peace is harder to come by. Your Major Spoilers review of Fallen Angels #1 from Marvel Comics, awaits! Previously on Fallen Angels: The residents on the island of Krakoa are currently in the aftermath of the events from X-Force #1.  One of those residents is Kwannon who has regained her body from Betsy Braddock as well as the codename Psylocke.

No Rest For The Wicked

In the opening pages of Fallen Angels #1 we see a child place an electronic device on their forehead and then rampage through a train, eventually leading to it’s derailment.  Over on Krakoa, Psylocke is attempting to meditate when a presence invades her mind and tells her that there is someone called Apoth who is in need of being taken care of.  Psylocke trusts the voice and goes to Magneto for permission to leave the island. He directs her to Mr. Sinister. Mr. Sinister agrees to let Psylocke pursue her mission. She recruits X-23 and Cable to join her, but X-23 only agrees if Cable doesn’t go. X-23 and Psylocke head to Tokyo to track down Apoth.  They visit a black marketeer who shows them a video of the train incident and Psylocke recognizes a pink butterfly mark on the perpetrator. She then experiences one of a few flashback sequences in this issue.  Psylocke then shoves one of her psychic blades into her head and gains to info of where to find Apoth.  X-23 and her head to a barn where they find a group of children. They one by one die until the last one standing issues a warning to the mutants to stay on their island.  Psylocke returns to Mr. Sinister and informs him that she’s going to put a team together and that as long as he keeps their actions a secret she’ll give him Apoth to do with as he wishes.

The Edgy Side of Dawn of X

The main story in Fallen Angels #1 is fine. It’s a dark and violent mystery that does some interesting things with flashbacks and cyclical storytelling. The story hooks are good though and deserve to be explored further.  Some of the themes though feel like retreadings of things we’ve already seen in Dawn of X.  Feeling out of place, questioning worthiness, the subjectiveness of peace, these have all been touched on already.  The thing that Fallen Angels does that’s different is that it doubles down on the idea that some of these characters crave violent lives and want vengeance. It gets very close to being too edgy for its own good.

Fallen Angels #1 is a beautiful book.  Both the art and the colors are great and come together to create a dark atmospheric look that pairs well with the thematic content of the story. What really sets this apart though, is the panel work. Especially in the flashback sequences, the use of the stylized panel borders and page layouts make those pages especially lovely.

The Bottom Line: A Serviceable Story, Held Up By The Artwork

Fallen Angels #1 is a little too melodramatic for its own good at times, but the story so far is interesting at least.  Where it lacks in writing though, it makes up for in the art department.  A willingness to play around with the format and add little stylistic details elevates this from an average comic book to a slightly above average comic book. 3.5 out of 5 stars.

If you’re committed to reading the entire Dawn of X lineup then you definitely don’t want to miss this. Also, the artwork is great and can carry this issue on it’s own. There are some elements that need time to develop, but as of right now Fallen Angel #1 isn’t blowing anyone away, storywise.