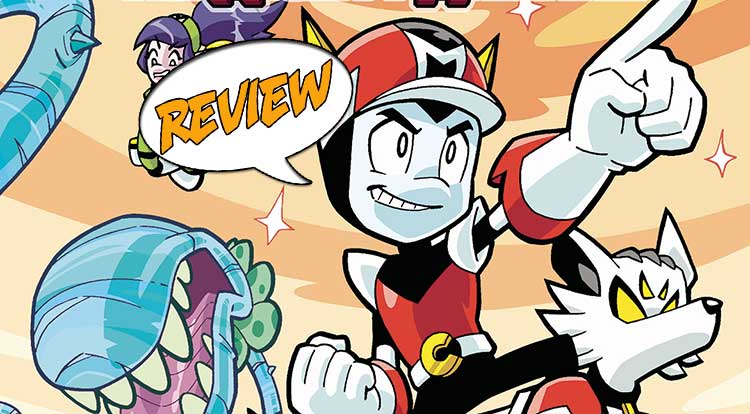 Cosmo and his crew have uncovered another despicable plan of the evil Queen Hesper! Can they Mighty Martian and his crew uncover the plan and spoil it before the Venusians get the upper hand, or will they have to use extra lives? COSMO THE MIGHTY MARTIAN #1 is on store shelves now from Archie Comics! Previously in COSMO: After discovering a plot by the evil Venusian, Queen Hesper, to conquer the Earth’s moon and all of its inhabitants, Cosmo and his crew decide they must stop her. For a while it looked like they may fail but they finally pulled the fat out of the fire in the end and defeated a Battle Princess and her evil forces. Now they are a target of the Venusian army, but they know they still have a responsibility to stop whatever schemes the evil Queen hatches next.

TO ETERNITY… AND FARTHER!

While recording his mission log, Cosmo is interrupted by Captain Max Strongjaw, as he plays with some cool action figures of the crew. Disturbed by the fact that he got them from Medulla, the team scientist and resident brain, his musings are interrupted as the ship’s pilot, Astra, calls them up to the bridge,. They are approaching the moon of Ceres, and the last known base of Venusian Battle Princess Shih. Determined to find out the purpose of her base on Ceres, they also come prepared to deal with the mutating effects of the element known as Aphrodite. The Aphrodite is known to mutate beings into unexpected things, they are hoping that the soap and water cure which worked on the moon mutants last series will work again. Cosmo decides to split the group up into two teams; Team Awesome, consisting of himself, his friend Orbi, and Strongjaw, and Team Bodacious, consisting of Astra, Medulla, and Orbi’s dog JoJo.  With Team Awesome going for a direct approach, Team Bodacious is instructed to take a more secretive route and infiltrate the base. Team B has a much easier time of reaching their destination, as Team A is attacked by floating rock eyes. Their ship damaged, they pull off a miraculous landing and disembark, only to be confronted by Princess Shih and two mutated Cerretts. Quickly discovering what cures one mutated species is useless against another, Princess Shih dons her VR control visor and orders the Rat-Trollz to attack! With a string of 1337 speak; the green monstrosities engage their enemies!

In another location of the base, Team B has successfully hacked the computer systems of the Venusians, and discovered that Hesper’s attempts at mutation have been attempted on more sites than they realized. Besides mutating their targets, the Aphrodite also makes them perfect subjects for mind control. They only planet which has not been affected yet is Mars, the team’s home planet. While performing her hackz, Medulla pulls up a security feed to discover Team A is on the run! Astra sends JoJo to assist, but reluctantly stays behind to guard Medulla.

Will Team Awesome escape their pursuers, or will they fall victim to the effects of Aphrodite? And just what is Queen Hesper’s evil plan?

This is not Ian Flynn’s (Sonic the Hedgehog, Mega Man) first excursion with Cosmo. He was the writer on the 2018 five-issue Cosmo series that is the set-up for this current run. Here he returns with the fun, fast paced, all-ages action that is perfect of younger readers and a nice palette cleanser for the older crowd. The antagonist, the Venusian Queen Hesper, continues her shenanigans, and even if you missed the first series (coming soon in a collected edition), you will have no trouble keeping up. Flynn makes each character an archetype with a little extra, and you easily feel comfortable with them. He mixes in clever gags and situations, giving it that youthful over the top feeling that can sometimes be missing from titles touted as “all-ages.” At least I finally know where all my left socks have gone!

Artist Tracy Yardley (Sonic Universe, Sonic Super Digest) also returns to Cosmo from his time on the previous series. His artwork furthers the youthful feel of Flynn’s script, and he begins to incorporate some imaginative panel layouts that move the story along nicely as well as focusing your eye on the appropriate characters. Great, solid artwork that feels like it defines its world. The colors by the prolific Matt Herms (Sonic Super Digest, Archie) are eye catching and memorable, great work on that front. Every time I turn around it seems that Herms is working on a title I review, and that’s a good thing!

I have to confess I missed the first Cosmo series last year from Archie Comics, but I am going to correct that. This series reminds me of the old Archie Adventure Series of titles which used to be published in the late eighties and early nineties. Those great, ground-setting titles and they appealed to a wide range of audiences. I think more all-ages titles of this quality, quality that clearly shows in COSMO THE MIGHTY MARTIAN #1, can be nothing but a good thing for the comic industry.

COSMO THE MIGHTY MARTIAN #1 brings us more of that Saturday Morning Cartoon flavor that seems to be missing from the shelves. Go see if your local comic shop has had a sighting of this great title today!

Entertaining, fun and well produced, COSMO THE MIGHTY MARTIAN needs to be added to your pull list, regardless of your age.