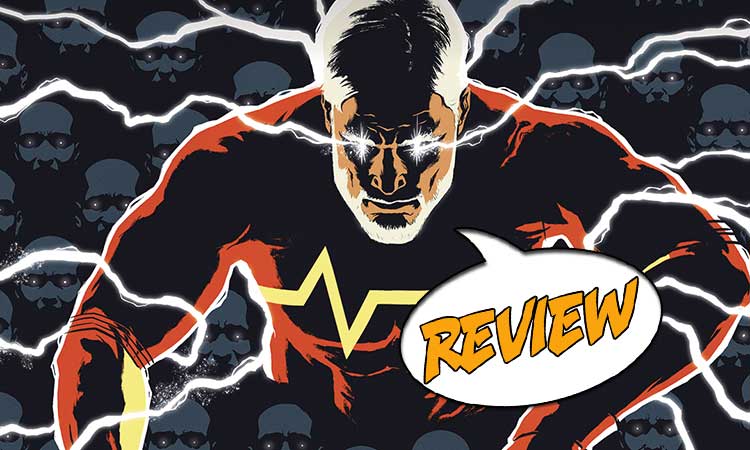 In the Gyre, alien gangs of Wardens vie for control and keeping order in their orbital prison. But who is responsible for them being trapped here – the Psi-Lords or the Starwatchers? Find out in Psi-Lords #6 from Valiant Entertainment. Previously in Psi-Lords: Scion tricks Artisan, Hazard, and Tank into getting him to the Psi-Lords’ ship where he tries to take on the power of their monoliths. There is a fight, and Scion disappears. As the Earth people catch their breaths, Vadim of the Widower clan shows up. After more fighting, they learn that there are rules among the gangs of the Gyre and agree to a hearing. In the meantime, it turns out that a Starwatcher who goes by the name of Dr. Patience has Scion. Dr. Patience explains that they are trying to find and destroy any traces of the Psi-Lords, as those traces are basically a god virus. Scion tries to talk Dr. Patience into killing the people from Earth.

Psi-Lords #6 is undoubtedly interesting, but it is confusing to try to keep up with the plot month by month. Not only do we have main characters who have major holes in their memories, but there are movers behind the plot which has several layers to begin with. This isn’t bad, as long as you like something intricate. If you want a straight-forward sci-fi slug-a-thon, this is probably not for you.

The issue opens with Artisan having a memory of the party his friends and family had for him before he went into space. Into this memory, Dr. Patience appears to communicate with him, while asking him to keep it secret. This is happening while, in real time, the Earth people’s trial is going on at an arena. Dr. Patience claims the Starwatchers are benign, trying to keep people safe from the Psi-Lords. Nihilio, the star the Gyre circles, is dying and is on a collision course with Earth.

At any rate, the hearing devolves into trial by combat. Dr. Patience is frustrated. Scion still insists he should just kill the Earth people. And we learn, as the fight goes on, that even this is complicate. One life needs to be paid for the Widower who was killed, but the survivors will be subsumed into existing gangs, and those gang-members in combat are scouting prospects at the same time. Meanwhile Beacon reminds everyone that the Starwatchers experimented on everyone here, gave them powers, and set them where they could fight among each other and not fight them.

It’s intriguing, as it always is when we don’t know everything that’s actually going on. Everyone has a plausible version of what’s happening, and nobody is particularly trustworthy. People may have selfish or hidden motives. It’s almost so much that we forget one thing that probably is true – Nihilio and the Gyre are on a collision course with Earth.

Artisan collapses in the fight, and then is visited by Ravenrok, one of the Psi-Lords. Artisan has a bad case of imposter syndrome, but Ravenrok gives him a pep talk. Artisan uses his powers to separate everyone in the area and shows them that the Starwatchers have a way to transport items into the Gyre. And if they have a teleporting unit, it probably isn’t one-way. And as the other Wardens come around to how this could help all of them, he also lets drop that their ship brought in something extra – an experimental fusion bomb.

SO LOVELY TO LOOK AT

The art of Psi-Lords #6 fascinates me. The colors look almost like watercolors which gives everything a soft, almost dreamy look at times. Then there are moments with faces where it looks almost like a filtered photograph and it feels so real. Then when various alien races are added to the mix it feels rather disquieting. I like the opening party when Artisan makes his way through the crowd to confront the alien Dr. Patience. There are three panels where some of the background people in the crowd are half in one panel and half in another. Artisan is moving through the crowd, so we see him in each panel making progress. And no one else sees Dr. Patience.

The fight is, again, well-choreographed and this time we see snippets of more alien races and their variety of powers. The Gyre is a richly varied place, and it feels like it’s even bigger than we’ve seen so far. Like the story, it’s almost getting to the point of feeling too rich and too complicated.

Psi-Lords #6 is definitely not a jumping on point, but it is the point at which all these different characters and plot threads finally come together and we can see that they tie in with each other. The Wardens are willing to jump into a fight, but they’re smart enough to talk to and even reason with.

It’s trial by combat, even while the fate of the Earth may hang in the balance!