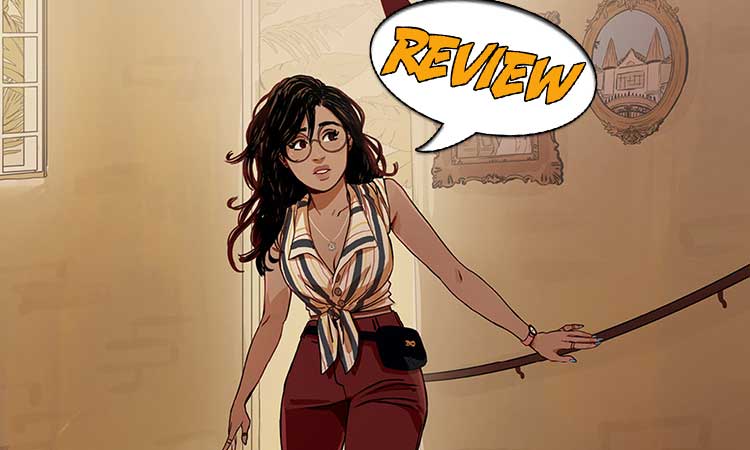 Juggling school and working for the ghosts of Rycroft Manor, Daphne feels the pressures of time. She doesn’t realize how much more complicated her life will become in Ghosted in L.A. #5 from BOOM! Studios. Previously in Ghosted in L.A.: Daphne is settling into her life in Rycroft Manor. The ghosts who live there all come from different backgrounds and life situations. Maurice was isolated and antisocial in life, and this only became worse after his death. When Ronnie (Daphne’s ex) arrives at the Manor and stays to talk to Bernard, Maurice goes after Daphne.  In the commotion, the rest of the ghosts get involved. Maurice tells her Agi has been luring in victims on his behalf. Agi lets loose with her special powers and banishes Maurice entirely. Agi sends Daphne on a special errand to visit a grave site, and Zola Tesla, the musician Daphne is a huge fan of, suddenly dies and her ghost arrives at Rycroft. Then Kristi, Daphne’s long-time friend, decides to go to L.A and see her.

Ghosted in L.A. #5 opens with a flashback to the same day as issue #1, but this time we see Kristi’s side of things. She storms home and her mother can tell something is wrong and immediately (and rightfully) assumes it involves Daphne. They have a little talk. Kristi’s mother had a friend rather like Daphne, needing things her way, needing to be the center of attention. Ultimately, either things will work out between them, or they won’t.

Daphne’s having issues with her schedule. She’s had to drop another class and is still swamped with schoolwork, plus the ghosts are keeping her busy with errands. She wants to be sure she can keep her grades high and it means making difficult choices and limiting her social life. Shirley makes a comment about how at least no one else had to date in the time of beeper, to which there is a multigenerational response of “What’s a beeper?” Shirley also asks Daphne for help with Zola Tesla who seems to be having some trouble with her adjustment to being a ghost. Daphne feels she’s too starstruck, but Shirley thinks her fangirling may be what Zola needs to hear.

Kristi arrives in L.A. and goes to Daphne’s dorm, where she meets Michelle. Kristi is almost as vivacious and talkative as Daphne is, which Michelle cannot stand. She does say she thinks Daphne is with her boyfriend. Ronnie, meanwhile, is talking with Bernard again when Kristi arrives to confront him. Daphne is not there; Ronnie tells her they broke up; she gets mad at him. But he doesn’t let on anything about Rycroft Manor.

Zola eventually comes around and talks with Daphne a little and they decide to explore Rycroft Manor a little. Hearing Zola talk about her past with music, how much it meant to her, and how lost she feels now since she cannot play an instrument, is bittersweet and well written. Daphne makes another connection with Zola when they find a guitar and Daphne asks her to show her how to play, at least a little.

The girls hide when they hear Shirley and Agi talking and overhear part of a private conversation. But Zola also finds a mysterious door…

LIFE AND DEATH IN L.A.

The art in Ghosted in L.A. #5 adds so much energy to the story, especially with Kristi. She is Persian, which is interesting in and of itself, but adds more diversity to the cast. She is delightfully intense and stubborn, and she contrasts well with both Michelle and Ronnie.

I’ve also come to really appreciate the ghosts. They’re all drawn in the same bluish color palette, with speech bubbles to match, but each has so many distinctive characteristics and the tones of the colors vary enough that they never feel the same. These are not fully transparent ghosts, although they may move through walls and objects. They often float, but even when they aren’t floating, their garments and hair always have a sense of movement, as though there is a ghostly breeze.

Ghosted in L.A. #5 is a great example of how comics are so much more than the superheroes everyone tends to think of. The theme of growing up and going away to college is so down-to-earth, but by adding a supernatural (and not straight horror) twist, it becomes something truly special.