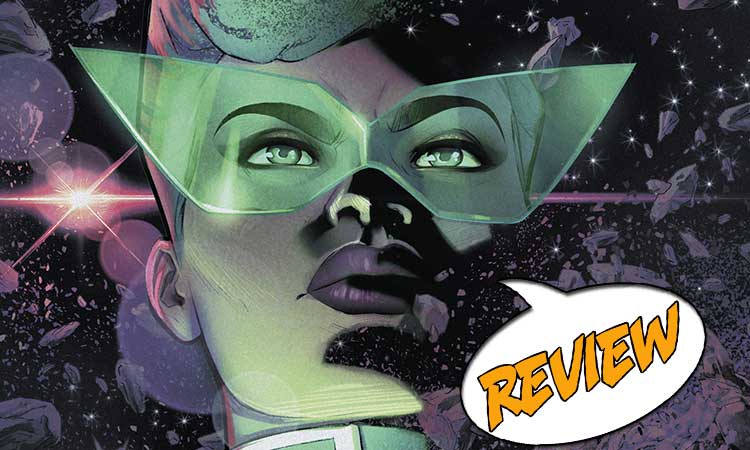 In the furthest reaches in space, on an unknown planet, a delicate balance between three races is threatened, and only a rookie Green Lantern can hold it together. Your Major Spoilers review of Far Sector #1 from DC Comics awaits! Previously in Far Sector:  The City Enduring is a planet that is home to three different races: The Nah, The @At, and The keh-Topli. To avoid the type of aggression that nearly brought them all to extinction, the three races have removed emotion from their society.

Far Sector #1 doesn’t waste any time and opens up with the aftermath of a murder. Lantern Mullein is on the scene with the resident police force who are ill equipped to handle a crime of this magnitude. Mullein tries to instruct them as best as she can before heading off to meet the head police officer, or Peace Captain, Syzn.  The two of them fly to meet The Trilogy Council, the leading government body on the planet.  After introducing herserlf, she informs the council that they already have a suspect in custody for the murder and that the real concern is how to prevent another one from happening and to do that they need to figure out why the first murder happened. Lantern Mullein leaves to speak to the suspect.  One of the council members speaks to her on her way out, saying that he has something he’d like to show her sometime. She reaches the place where the suspect is being held and is introduced to Duol, a “Pacifier” who’s been assigned to assist Lantern Mullein with whatever she needs. The pair enter the room where the suspect is being kept, only to find her brutally murdered with the perpatrator still in the room.

Seeds of Something Special

I’m not very familiar with N.K. Jemisin’s writing other than the acclaim and accolades it’s received, but I can say that the last thing I expected was a noir detective story.  All the trappings of an old detective story are here, but they’re framed in such a way that makes sense while also feeling fresh. There’s dramatic internal dialog, but it’s because our lead character is new to her role and is trying to work these things out with the reader.  There’s a diverse cast of characters who are keeping their motivations close to their chest, but that’s because it’s a planet of three different races where emotion has been removed.  There’s even a naive uniformed police officer sidekick, but that can be used to describe the whole police force on the planet. It’s a good debut for the main character, Lantern Mullein, as well. It doesn’t take long to get a feel for who this character is and what she’s all about, without her personality coming off as obnoxious or cartoonish in anyway.

Jamal Campbell is putting in some serious work with this issue, pulling both art and color duty, and he’s done a fantastic job. I haven’t seen an opening page that has grabbed me like this in a long time.  Thankfully, the art doesn’t let go throughout the issue. What stood out to me the most was the cinematic feel to Far Sector #1.  Throughout the issue  there are very visible uses of techniques like dutch angles, close-ups, deep focus shots,  over-the-shoulder shots, and crane shots.  These all come together to give this issue a fluid feel, almost like a very developed storyboard.  Also, there’s some great design work here. Lantern Mullein’s Green Lantern suit is one of the best ones since John Stewart’s suit in Justice League TAS and The City Enduring is filled with colorful and spectacular cityscapes to ogle. My only complaint, is that some of the pages are very crowded and it takes a few looks to really take it all in.

The Green Lantern mythos is one of the most important within the DC Universe, but it’s also one of the most convoluted and silliest. For so long now the role The Green Lantern Corps plays has been ill-defined at best, but with Grant Morrison’s run on The Green Lantern and now here in Far Sector we’re seeing a heavier focus on The Lanterns as law-enforcement. Now, while the former definitely relies on the sorted history of The GLC, Far Sector remains joyfully unburdened by all that canon.  Far Sector #1 pulls off a lot seemingly effortlessly; it’s the opening chapter that sets a strong tone, it introduces a host of new characters effectively, and gives us a beautiful new setting. 4.5 out of 5 stars.

Far Sector #1 is a meticulously crafted comic book that is full of personality, a strong sense of intrigue and mystery, with gorgeous art and design. Potential readers shouldn’t let the Green Lantern aspect scare them off, this stands on its own.