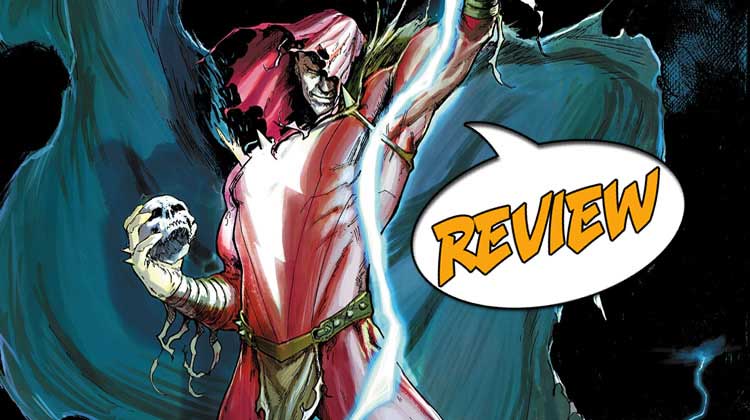 One of the best ways to get to know a character is to see his or her “dark side,” as it were. Explore the things the “real” person would NEVER do. And that’s what The Infected: King Shazam #1 from DC Comics is all about. SOLICITATION: Billy Batson is a good kid. He helps his friends, loves his family, and tries to do the right thing. But Billy is about to have a run-in with the most dangerous serial killer in existence, and the Batman Who Laughs wants Billy to be bad. Spinning out of the events of Batman/Superman and “Year of the Villain,” it’s the tale of a hero whose soul has been turned black, and who has something to prove to the old guard. Buckle in for Shazam’s journey to punch a bunch of so-called “gods” in the face and show the establishment exactly what the future looks like…

‘CORRUPTED BY AN INSATIABLE RAGE’

The Batman Who Laughs is truly one of the best villains to come around in a long time. He’s Bruce Wayne corrupted by Joker venom, and that’s a scary and surprising thing in itself. But now he’s come to “our” universe and is assembling an army of his own, and he’s decided that Shazam! is a powerhouse he wants on his side.

One of the most fascinating parts of this whole story is that BOTH Billy and Shazam! have been “turned to the dark side,” not just one of them. I have to consider that the things this infected version of them says and does is also a part of “our” hero, but even though he may feel these things at times, he never acts on them. Until now, that is.

The basis for this story is explained in one sentence by one of the good guys: “The boy has been corrupted by an insatiable rage.” He’s mad at everyone, not just himself. And calling himself KING Shazam! Sheesh!

Billy lights into his “family,” saying that the whole setup is a trap, a lie. Then he changes to Shazam! and tries to find someone who can go toe to toe with him, including some of the people he gains his powers from. They don’t often measure up, sadly.

Things come to a head when Mary Marvel shows up on the scene. She’s long been the voice of reason in the Marvel Family, and she tries to reason with Billy/Shazam! That leaves her open for an attack and, if what she hears is true, possible infection just like Billy has endured.

On many levels, this story reads like a teenager rebelling against authority. They do and say things they may later regret, but right now, it’s the ONLY thing they feel like doing—taking down the very people who care for him or her.

The dialogue is particularly intense when Billy and Mary are fighting both verbally and physically. That doesn’t mean that the rest of the issue isn’t gripping. Then, too, the cover has an interesting take on part of the Shazam! mythos: “Just SCREAM the word!” instead of “Just say the word!”

Granted, this story leads into other chapters coming our way soon, but it’s a very dark and very sad examination of all that Billy Batson and his alter-ego are NOT nearly all of the time. It’s like watching a car wreck—you can’t take your eyes off it even though you don’t want it to happen!

The art team does a great job especially when it comes to facial expressions. Billy’s family being shocked at what he’s doing is particularly well done. I can usually hear the gasps I’m sure they’re saying.

Then, too, there’s a lot of action in this issue as Billy fights with his friends and family. And it hurts when I look at it, it’s so great. Shazam! fights with Atlas at one point, and it made me grimace as I watched the fist fight. Also, that last sequence with Mary Marvel is awful in the purest sense of the word as we see Billy try his best (or worst) to make Mary hurt on as many levels as possible.

Not only that, but the events seem to take place at night, appropriately enough! Well portrayed!

I would be tremendously surprised if Billy doesn’t return to the side of the angels when this storyline wraps up. However, that doesn’t make reading this any easier! This is Shazam! at his worst, dark and twisted as he deals out pain to everyone close to him.

I’m seriously engaged in this whole tale because of the way we’re seeing dormant parts of these characters getting their time in the sun, as it were. I think there will be a LOT of grief taking place on Billy’s part when he has to face all he’s said and done here. But I can’t turn my eyes from it because it’s so horrific and so true-to-life to me!

One of the best ways to get to know a character is to see his “dark side,” as it were. You know, explore the things the “real” person would NEVER do. And that’s what this comic is all about—what Billy Batson or Shazam! wouldn’t even consider saying or making happen.