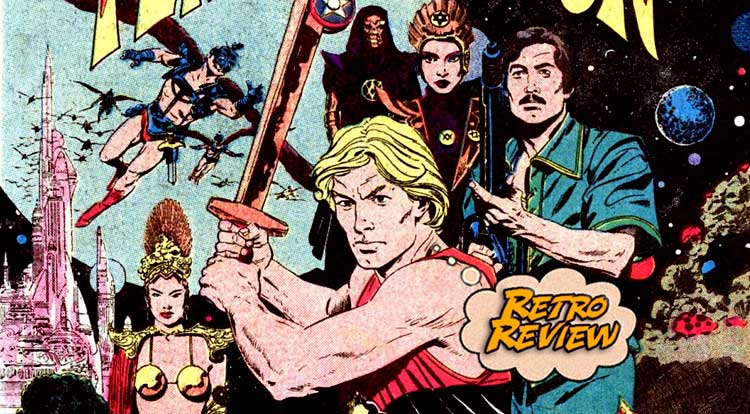 Is it the greatest film experience in the history of celluloid?  You make the call!  Your Major Spoilers (Retro) Review of Flash Gordon – The Movie awaits! Previously in Flash Gordon – The Movie:  Debuting in 1934 to compete with the success of the syndicated Buck Rogers comic strip, Flash Gordon began his adventures in the comic strips.  This was back in an era where the comic pages were a legitimate phenomenon, and Flash became as big a deal as Buck, spawning merchandise, film serials and more.  By 1980, though, his star was not nearly as high, but the post-Star Wars boom in science fiction led Dino De Laurentiis to cash in the movie rights (which, notably, George Lucas attempted to license before deciding to invent Luke Skywalker instead.)  Our story proper begins with random events of destruction, strange weather and natural disasters, rocking the globe.  A small craft containing pro athlete “Flash” Gordon is damaged, the pilots lost in the cataclysm, forcing Flash to crash-land the ship on the grounds of a strange, seemingly abandoned house.  There, they’re forced at gunpoint to enter a special craft created by the homeowner, one Hans Zarkov, who has been discredited for his belief that the disasters are of alien origins. It’s always difficult to compress two hours of movie into one coherent story, and even with nearly 70 pages to work with, Jones hqas to collapse entire scenes into a panel or two.  The “traveling to Mongo” sequence is a beautiful page, though, and the rendition of Ming’s palace is breathtaking, even given the limitations of 1980 printing and 30-year-old paper.  Arriving on planet Mongo, Flash, travel agent Dale Arden and the now-prophetic scientist Zarkov are taken into custody and literally transported to the aliens’ leader.  First, though, we have to meet the future yelling voice or Tarzan and an upcoming James Bond. Oh, and Ming himself, who claims Dale for his own, while his daughter Princess Aura sets her sights on Flash.  She saves him from execution after he tries to bust free, even helping him to escape from Ming’s clutches, fleeing into the forest, where they end up among the Treemen.  Dale even manages to keep from becoming Ming’s courtesan, falling in with thye Hawkmen under the command of Prince Vultan.  Among the Treemen, Flash discovers treachery and is goaded into taking their test of manhood by sticking his arm into the lair of a flesh-eating monster, facing the possibility of a painful death! Fortunately, Flash is only feigning injury, using the distraction to disarm Prince Barin (who is totally not James Bond, nor is he an evil N*zi Errol Flynn stand-in.)  Williamson’s art  is truly amazing, combining the 80s sensibilities of the movie with traditional Flash Gordon touches like the boots/pants in that last panel, so even when the story doesn’t quite translate through to the script, the reader almost doesn’t care.  Flash and Baran are then taken into custody by Vultan’s Hawkmen, allowing Barin to force his right of trial by combat.  Although how and why that translates into a fight with Flash is unclear, we do get a pretty faithful (albeit short) rendition of that fight, including excellent renditions of Brian Blessed shouting. Defying logic and at least one of Newton’s laws, Flash manages not to kill Barin, even sparing his life, earning the Tree-Prince’s loyalty.  But when Ming’s henchman, Kytus, arrives to arrest Flash, he gets thrown onto the spikes, proving that old adage by Chekhov.  (No, not the one from ‘Star Trek’.)  That causes Vultan and his men to flee, leaving Flash and company to be captured once again by Ming, who offers him command of planet Earth in return for his fealty.  He refuses and is left to die as Sky City is blown to bits.  Thanks in part to the killer soundtrack, Flash (AH-AHHHHHH!) escapes on a sky-cycle and once again returning to attack the forces of Mongo.  But, as a man with a squid for a head once exclaimed, it’s all a trap, allowing Vultan and the Hawkmen to ambush and steal a war rocket, as well as use his football skills.  Flash crashes through the protective lightning field and impale (!!) Ming on it in a final attack. Actually, it’s not yet, as there’s still the matter of installing Barin as the true King of Mongo, with Vultan as his premier general, while Flash and Dale wonder if they’ll ever make it home.  The artwork is capital-g gorgeous, and it all wraps up with a big ol’ bow (with the afrementioned fakeout ending), leaving Flash Gordon – The Movie with a well-deserved (and mostly earned by Al Williamson) 3.5 out of 5 stars overall.  This is a book that lacks the over-the-top acting of the cult classic film, as well as some of the breakneck pacing and top-of-the-line-for-1980 special visual effects, but makes up for it with a delightful agglomeration of classi comic strip Flash with Sam Jones’ post-disco stylings.  The odds are you won’t be able to actually FIND a decent copy, but there’s also a reprinting in Western/Whitman’s Flash Gordon ongoing series the next year.  If you’re a hardcore fan of the movie, this is going to seem like a talented cover band putting their own spin on a favorite song, but it’s a spin that you’re likely going to enjoy.

A tough story to adapt gets a pretty solid script and some truly wonderful Al Williamson art. He should draw everything.