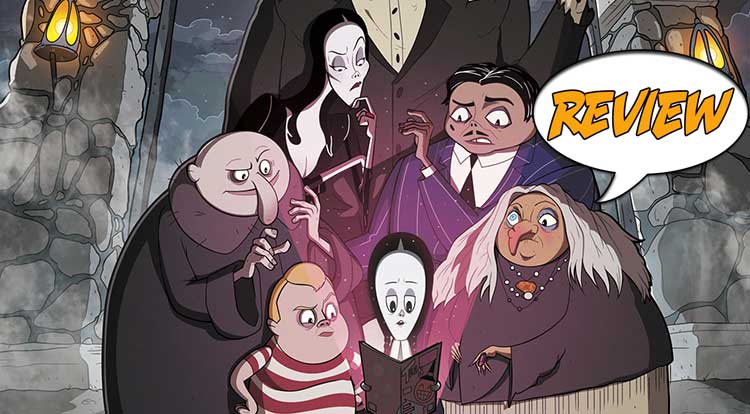 Eleven is an awkward age for girls, even for Wednesday Addams. How can she be rebellious without just being…mundane? Find out in The Addams Family: The Bodies Issue from IDW Publishing. THE ADDAMS FAMILY: THE BODIES ISSUE

The Addams Family has been a perennial favorite since their origin in Chas. Addams cartoons in the New Yorker. They’re delightfully macabre and have always been a remarkable way to put a satirical twist on the stereotypical ideal of American life. To me, they’ve always sent a strong message to not be afraid to be yourself no matter how hard society presses you to conform.

THE ADDAMS FAMILY FOR AN UPCOMING GENERATION

I was delighted to review The Addams Family: The Bodies Issue, which is a one shot from IDW Publishing. I have been a fan for a long time, starting out with the old black and white TV show and then delving into the original cartoons (which are more sharply witty than laugh-out-loud hilarious). They have always been a satirical take on the stereotype of an aristocratic American family, and as such, they are timeless.

I am so happy to see that this take on them keeps that mix of the macabre, the disconnect with popular trends, and the unwavering affection they have for one another. In fact, the issue opens with Morticia and Gomez dancing the tango and reminiscing wittily. There are thuds from above; the chandelier crashes down near then; Morticia comments about the “pitter patter of little feet.”

It’s Wednesday and Pugsley playing “guillotine the prisoner,” but alas, the guillotine is an old hand-me-down and just doesn’t cut it anymore (literally). Wednesday is going through a period of ennui. Things just don’t bring on the old thrill of terror that they used to. Her parents, especially her mother, can tell she doesn’t seem quite like herself, and Grandmama mentions that she has the same youthful angst that her mother had. Then she mentions something tantalizing about a wicked grimoire.

It’s off to the library, but she’s already read all those books. And then she spies something on Uncle Fester’s desk. Its pages have had words carefully cut out for making ransom notes, but it is a magazine. And oh what a magazine! Articles about love, romance, fashion…and transforming yourself.

Wednesday is the perfect vehicle for lampooning the tropes of the teen fashion magazine, especially since she isn’t concerned with making herself over. She takes the advice very literally (“Boy problems? Dump him!” results in carting a jovial Pugsley off to the dump.) and very seriously. Not even Thing and Cousin It escape her treatment. Eventually it’s just too much wholesomeness, and Morticia has to have a little mother-daughter talk with her. Wednesday Addams isn’t just an Addams – on her mother’s side, she is a Frump, and that’s something to be proud of.

DARK, FUN, AND TRUE TO ITS ROOTS

The Addams Family: The Bodies Issue holds true to the original character design – why mess with greatness? As a comic book, there is more opportunity to play with expressions and body language. And the details of the house are terrific. The kids are playing in the attic, probably, because that seems like a place one might stow the old guillotine, the iron maiden, the electric chair. There’s a little monster pull-toy that I swear I remember from the original cartoons. The library, besides being full of books, has all kinds of strange junk. The art is a feast of fun for the eyes.

When we get to Wednesday’s makeover montage, the dry humor continues visually and it’s delightful, building to a crescendo with Thing and Cousin It. Through it all the little details continue, bringing their world to life almost tangibly.

While The Addams Family: The Bodies Issue is aimed at a younger audience, there is plenty here to delight fans of all ages. It’s witty, it’s visually fun, and it captures the spirit of the Addamses perfectly.

The Addams Family: The Bodies Issue

A charming tale of modern life and budding adolescence with the Addams Family.