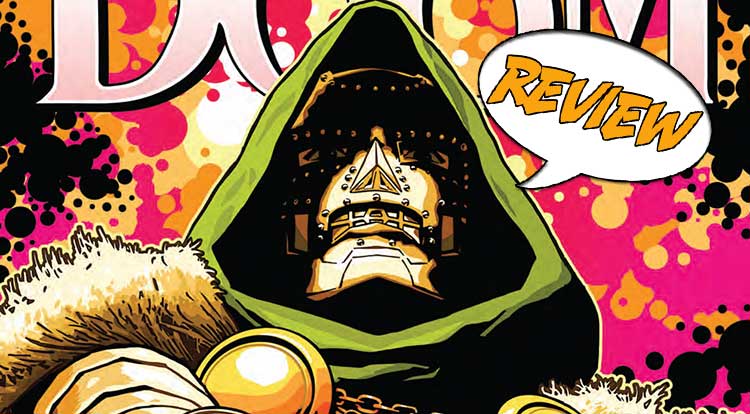 By Jonathan Cadotte on November 9, 2019 0 Comments

Doctor Doom has surrendered himself to the heroes. But, it seems his future isn’t behind bars. Your Major Spoilers review  of Doctor Doom #2 from Marvel Comics awaits. Doctor Doom #2 opens with Victor Von Doom being escorted by a group of heroes including Doctor Strange and H.E.R.B.I.E. to New York.  He has remained compliant up to this point and shows no signs of resisting. But, during transport Doom is visited by Kang the Conqueror, who says that he’s glimpsed Doom’s future and he is the ruler of a peaceful Earth. With this information Doom decides it’s time to escape and does so with Kang’s help.  Elsewhere, the new leader of Latveria, Victorious, is verbally sparring with the U.N. over their treatment of Latveria and the growing tensions with Sykaria. Doom reaches New York City, where Morgan le Fey contacts him and agrees to shelter him.  They spend some moments together discussing this supposed future, The Beatles, and their next move.  H.E.R.B.I.E. enlists the help of The Blue Marvel to help track down Doom while Victor seeks out a man named The Witness.  Morgan and Victor meet The Witness, who confirms Kang’s assertion, but before anything can be done, a bullet pierces Victor’s skull.

Doctor Doom #2 has some problems.  One, it feels very uneven.  The sudden arrival of Kang and the ensuing plot that spirals from that doesn’t really fit with what has been established in this series so far.  It really does feel like it just comes out of nowhere.  Also, the moments of humor with H.E.R.B.I.E., while decent, also come off as being out of place. What this issue really deserves credit for is the smaller moments.  The few lines between Doctor Strange and Doctor Doom effectively convey familiarity between the characters and a sort of respect. The scene in Morgan’s apartment though, is the shining moment of the issue. For just a little bit, the dialog between them make your forget that these are both supervillains who are both responsible for a fair amount of death and destruction. For a couple of pages they’re just two people living their lives, as crazy as they are, as best they can. It’s a nice sequence to say the least.

The Bottom Line: Take The Good With The Bad

I’m not one of these people who need my villains to be humanized or sympathetic. In fact, I generally don’t like that trend at all. But, if there’s one villain that has the groundwork and history to deserve the empathy treatment, it’s Doctor Doom. There’s some really odd decisions in Doctor Doom #2 that certainly detracts from the product as a whole, but there’s also some lovely, human moments on display that pays for the price of admission. 3.5 out of 5 stars.

There’s some nice parts in Doctor Doom #2, but also some not so great parts. If you want to see a more humanizing take on the classic villain with some real human drama, this book has you covered. If you want a well structured, intricate plot, maybe look elsewhere.