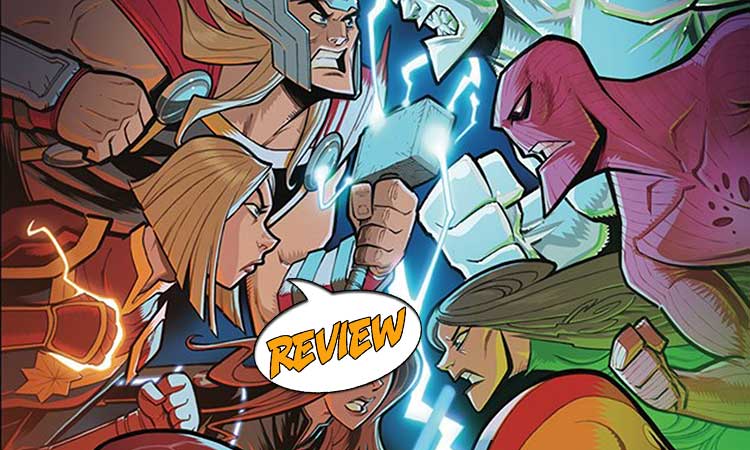 As Captain America battles a strange creature inside the Avengers headquarters, the rest of the team is taking on Madam Masque and the U-Foes. Bad as that sounds, Black Panther’s predicament may be much worse. Find out more in MARVEL ACTION: AVENGERS #8 from IDW Publishing. Previously in MARVEL ACTION: AVENGERS: Something is coming, and there is an effort on all sides to prepare for it. As M.O.D.O.K. and his A.I.M. minions get ready, the Avengers find themselves on the defensive. A strange creature has appeared in the Avengers headquarters, and Captain America must battle through fear to go on the offense. Madam Masque and the U-Foes are on the perimeter, garnering a response from Iron Man, Black Widow, Captain Marvel and Thor. However, the most surprising attack may be happening against the Black Panther. The foe he faces seems to be none other than the previous bearer of the Black Panther mantle, also known as T’Challa’s father, who is supposed to be deceased.

Despite the sudden flash of fear that threatens to overtake him, Captain America fights back. He is no stranger to fear, but long ago learned to conquer it and do what has to be done. Seeming disinterested, the creature phases through a nearby wall, evading the Captain’s attack. When he calls on his fellow Avengers for assistance, be finds they are in the middle of a battle of their own.

Black Widow and the other Avengers are facing off against Madam Masque and the U-Foes, but one active member is mysteriously absent. T’Challa, king of Wakanda and heir to the mantle of the Black Panther, finds himself facing down a man in a familiar costume. Unmasked, he sees that it is his father, T’Chaka. Nevertheless, T’Chaka is dead, but the man he faces down has the appearance, and moves of his father. Shaken, T’Challa races after him and faces him down on a rooftop garden. His father and he battle, and during that battle, the elder Panther tells his son that he is disappointed in him and in how he treats his kingdom. Before vanishing, T’Chaka tells his son that he has returned to reclaim the Black Panther identify.

In the streets below, the other Avengers seem to be holding their own against their enemies. Using teamwork, X-Ray distracts Captain Marvel enough to allow Vapor to enter her lungs, momentarily taking the fight out of her. As Thor faces down Ironclad, the metal mammoth tells the smiling Norse god that he has no intent of high-fiving him before they battle, but he completely misreads Thor’s intent as Mjolnir returns to Thor’s hands, striking the U-Foe down with style. Even as Captain Marvel expels Vapor from her lungs, Madam Masque is trying to convince Black Widow they are not there to fight, but to talk. Will the Black Widow listen, or will they lose valuable information about the staggering enemy they are about to face?

THE FEAR IN YOUR HEART STRIKES BACK!

If you are a fan of the Marvel Studio movies, or if you have a young fan in your life, Marvel Action: Avengers is a book which should really be on your read list. Matthew K. Manning (Teenage Mutant Ninja Turtles Amazing Adventures, The Batman Strikes) does a wonderful job of evoking the feel of the cinematic universe, while at the same time insuring the story moves at a solid pace and works with the adventure and action to tell an entertaining story. The even if you missed the last issue, you get the information you need to understand what is going on delivered in a realistic and helpful way. There are some gem moments here, Captain Marvel’s reaction to breathing Vapor, the great way that Thor defeats Ironclad, and even the tense situation between Black Panther and the person who appears, even to him, to be his father. There is not a lot of exposition during battle, but what is there entertains you to the fullest.

The artwork of Marcio Fiorito (Robert Jordan’s Wheel of Time: The Eye of the World, Red Sonja) is great.  His character designs combine elements from the Marvel Comics and the cinematic universe and come across as unique and eye-catching. Despite having drawn some of the sexiest women in comics, his art work here is all-age friendly without being dumbed down to the lowest common denominator. Add color work by Protobunker Studios (Star War Galaxy’s Edge, Super Sons) and you get a solidity that brings everything together.

This issue is fight heavy, but that is what is needed sometimes. We have a couple of plotlines moving, from Madam Masque and the U-Foes coming to the Avengers for aid, to the mystery of T’Chaka’s reappearance, to the coming of the Fear Eaters. But despite the number of plots, it reads smoothly. There are some great character moments, and I personally love the use of the Fear Eaters, as they have been around for a while, but never used in this way.

MARVEL ACTION: AVENGERS #8 is fast, fun and entertaining. A great book that gives you a rest from the heaviness of the “regular” Marvel titles.

Lots of action, some great laughs, and a family friendly feel.