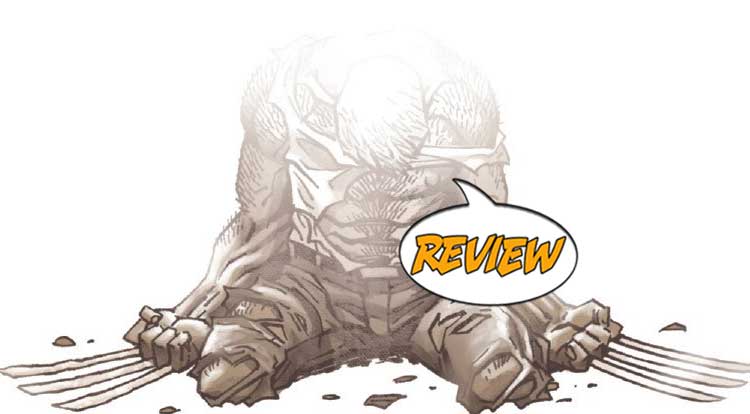 Previously in Dead Man Logan:  The writing’s been on the wall for months now… Logan is dying.  And he ain’t getting any better.  Sick from the Adamantium coating his skeleton, his search for a cure has led to nothing but dead ends.  But for once he’s actually trying to leave this world with some unfinished business…  Can Logan take his last breath without slaughtering the X-Men again?

Having made their way to the place where Thor’s hammer fell when he did, Logan, Bruce Banner Jr. and Danielle Cage thought their problems were over. That’s when Dani was shot through the heart. Things are looking up as this issue opens, though, as she has grabbed Mjonir and rises, possessing the power of Thor. This turns the tide for Old Man Logan, as the three of them tear through Sabretooth’s thugs with a brutal efficiency, with Logan paying special attention to the task of chopping his old enemy to bits on panel. Unfortunately, this final victory has taken its toll, and with his last dose of the Regenix drug (the one that has been propping up his fading healing factor) gone, Logan knows that his time is up. Rather than waste time trying to patch up his wounds, he requests that Dani and Bruce take him to the farm where his family is buried, with only a brief delay to smash Mister Sinister’s head in. After saying his goodbyes to his last remaining friends, Logan says goodbye to his late wife and children, collapsing and bleeding out on their grave site. After burying the once-and-future Wolverine, Dani and Bruce Jr. set out to find their own place to call home.

A MÉLANGE OF THE ORIGINAL AND THE MOVIE ‘LOGAN’

I have to say, I liked this series MUCH more than the shock-fest that was the original ‘Old Man Logan’, and even felt some sympathy at seeing the used up Logan paying his final respects. That’s partly because this series felt more like the film version of the tale (especially as regards it’s architecture and vehicles) and partly because this Wolverine is truly an old man, and written as such. Brisson gives him a final monologue worthy of the character’s resume, one that makes his lost family feel like more than the set dressings that we saw in ‘OML’ and the use of Danielle Cage here is wonderful. Mike Henderson does a good job with the art in these pages, and while there is a lot of blood and a lot of gristle to be seen, he shows an appropriate restraint in how that is depicted. I’ve had a lot of trouble this week with books that went too far into the gore (a common problem around Halloween, I’ve found) but this issue manages to show Sabretooth being ripped to pieces without churning my stomach. I think what I appreciate most about this issue is the ending sequence with Bruce and Dani enjoying a real human bond, continuing the emotional spine of this story and it’s theme about the importance of family.

I had not been reading this title, but actually binged the series after reading this issue, proving that Dead Man Logan #12 is a successful sequel/final chapter for this character, with art that nails both the action sequences and the emotional beats, and a story that makes a character that I truly disliked into a the hero he should have been all along, earning 4 out of 5 stars overall. I am quite impressed with this issue, and would recommend this one to fans who want a good, emotionally engaging Wolverine story.

I just wish the original had been this good.